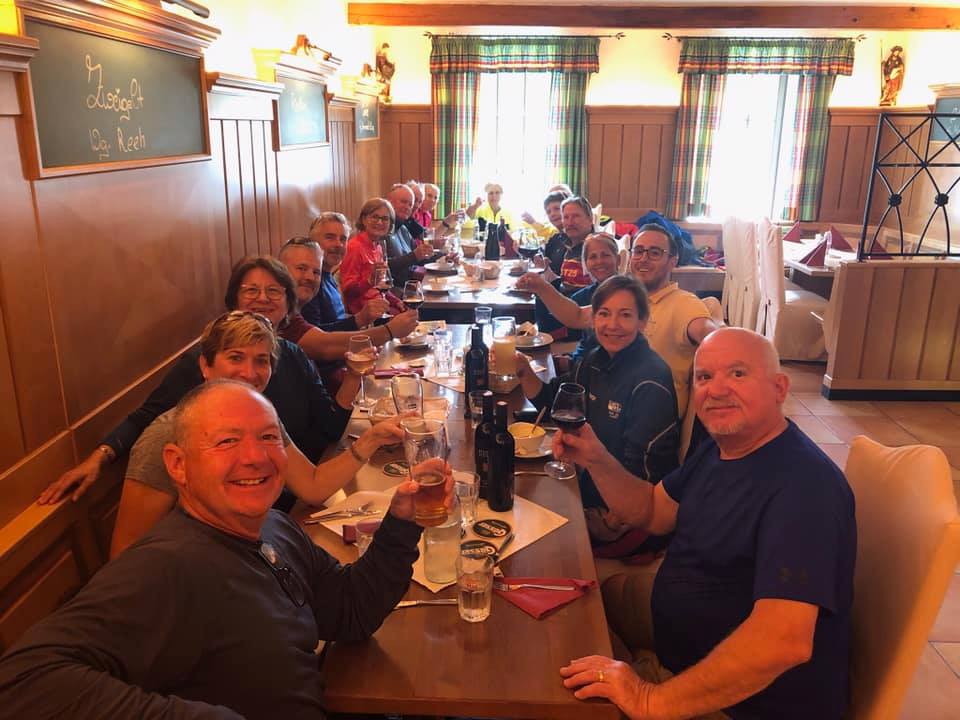 Our group of 16 on the bike tour across Austria was made up of family and friends—Jacques, my two brothers, their wives, several couples who are friends who live in the Lakes Region, some friends of theirs, and the sister of the group organizer, and her husband.

We ranged in age from 50-ish to 60-ish, and we had varying levels of athleticism. Our fearless leader, Scott, organized the trip with the help of a company called Radurlaub. He’s built like a brick house, and he can waterski the way Mikhail Baryshnikov can dance a pas de deux. I think it’s fair to say he was one of the powerhouses among us.

Most of us rode traditional hybrid bikes; three of us had ebikes. We had panniers on the backs of the cycles, in which we carried our rain gear, extra layers, flip flops, snacks, picnic fare—including beer and red wine—and everything from books to bathing suits, just in case.

Many days, we travelled as a pack. You can imagine how interesting that made crossing city roads, making decisions, and navigating. Yet, there were no arguments, no flared tempers. Instead, there were people who naturally emerged as leaders—Scott and my brother Allan chief among them. Then there were those of us who followed the leaders.

Scott and Allan, and sometimes Jacques and my brother Jeff as well, used the maps Radurlaub had provided as well as their smart phones to navigate. Sometimes we got lost, but no one complained or rolled their eyes. The theory was if you weren’t taking responsibility for leadership, you got what you got.

Riding in a group like this, you can imagine how many times you’d need to stop when someone needed the restroom, to remove a layer, or grab sunglasses out of the pannier. We never would have made it from point A to B if we all stopped each time there was a need. We tended instead to tough it out until there was a cluster of people who needed to take an action. Then we’d stop to rest, do what we needed to do, stretch, and keep going.

Some of the hairiest moments came with riding in the larger cities, such as Linz, Krems, and Vienna. My brother and his wife, Jennifer, were often in the lead, counting heads like parent ducks. Arriving in Emmersdorf was hairy, too, for a small group of us that took a wrong turn. (Stay tuned for those stories.)

For the most part, though, it was all good. There was so much trust, respect, and camaraderie. That fact led to my key learning on the trip: I had no interest in making this kind of journey with anyone outside our group. I came to this realization in Grein, Austria, as we visited a castle, Schloss Greinburg.

A group of cyclists who’d used the same touring company was at the castle at the same time. We had seen these riders multiple times on the trail; they were from New York and New Jersey. In that moment, they were making plans, and one woman in the group—their leader—was telling people what to do, rather than leading by consensus.

I found her loud and grating. Folks in her group who were not in agreement were equally loud in making themselves heard. I realized how unique our tight clan was, how no one had annoyed me.

At dinner that night in Emmersdorf, I raised my glass. “I would not want to do this with any other group of people.”