You are here: Home / Adventures / When Your Daughter is the Teacher 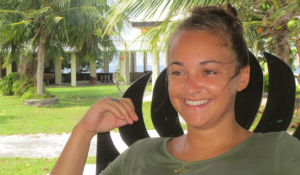 Note: This is the tenth of fifteen parts. Click here to read from the beginning.

My daughter Molly has been more than a companion on this trip. She’s been a tour guide, an interpreter—the keeper of all information.

From the first day, when Molly met me at the airport and hailed the cab that would take us to her apartment, she has been offering up lessons—that “Yokwe” means hello, that children have difficult lives, that dogs might attack, so keep a rock in your hand while running.

I can’t say I have been the best pupil because I am accustomed to figuring things out on my own. I need to learn by doing, or watching.

On our first beach walk on Eneko, for instance, as we navigated the coral and waded through tidal pools, Molly told me that some of the creatures we were seeing can be harmful if you touch them; she learned this in her orientation at school.

Moments later, seeing me with a spiral shell in my hand, Molly said, “Did you just pick that up?”

I had listened, I just wasn’t entirely convinced that something in those pretty pink shells could hurt me, but I have yet to pick up another one.

I also was slow to grasp on the matter of wifi. I did not receive a consistently strong signal in the apartment I was staying in, and Molly would often tell me to move closer to the school’s cafeteria, where the router is located.

“It’s ok,” I would say and continue grumbling.

One morning, I followed Molly over to the cafeteria to post some photos on Facebook and send photos via email.

“Mom!” she said in frustration. “I’ve been trying to tell you that for two weeks.”

I’ve had a much easier time learning from Molly just by watching her.

The first time I saw a cockroach outside the tub stall in our room on Eneko, I called out to her, “Ew! What do I do?”

She said, “Keep your eye on it” while she grabbed a shoe and then smacked that cockroach dead. I have since used shoes, and empty Gatorade bottles, to kill at least 10 of the buggers myself.

Molly also gave me an education on conservation. I saw that she saves the water that runs out of the tub faucet while she’s showering; she keeps an empty gallon jug underneath and has a collection of about six or seven jugs in her shower, in case she runs out of water in the drought that has been declared here. I began using the same runoff to wash my running clothes and rinse my bathing suits.

I am so proud of all that Molly has learned here—not only about living on Majuro but about living life in general. Once painfully shy, she is now meeting people from all walks of life around the world. She is more patient when circumstances don’t go her way. She thinks problems through. She is kind and generous to the people around her.

And she shares what she knows with others.

She is, after all, a teacher.