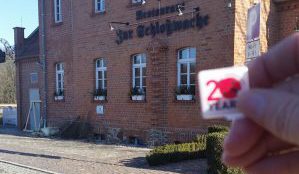 Note: This is the eighth of eleven parts. Click here to read from the beginning.

Immediately after he broke ties with me, Jacques deleted me from his Bumble account, so I childishly deleted our string of texts on my phone with a heavy heart. Gone was the lobster photo, the warm face, the texts I loved to read and reread.

I was surprised and pissed off that it hadn’t occurred to Jacques to have a conversation with me, but I was resigned. All is fair in love and war, yes?

I went back into the Bumble candidate pool and swiped right a few times. I made a new connection to Jonathan, and, in that same evening, screwed that up, too. Jonathan had shocking white hair. I don’t remember much else about him except that he looked just like a friend of mine who plays in a band in the area.

So, what did I do? I pasted in a photo of my friend and said to Jonathan, “You look just like this friend of mine” in, like, the first 20 minutes of the conversation. That weirded Jonathan out, I guess. He went bye-bye. I didn’t care.

Troy continued to text me all day of every day, and I was grateful to still have that connection, and I was also looking forward to a live date with him that was drawing ever closer. In this particular week in late February, Troy was travelling in Germany, visiting family. We were texting via an app called What’s App.

Because Troy was a big World War II fan, I had sent him my favorite Eli Wiesel book, “Night,” before he left, along with a sticker with my 20th anniversary Beetle Press logo on it. I asked Troy to take the sticker to Germany and adhere it somewhere! Then I promptly forgot about that request.

One morning, while on a ski trip (when I experienced the Airbnb from Hell), I woke up to a series of texts from Troy—photos of his hand holding my sticker in front of a castle in Delitzch, Germany, and in front of a restaurant called Castle Watch, in the same city. (Remember, we had an emperor-lord-lady theme playing out.)

“I did a 10k around the city today, my lady, and took those pictures on my run,” Emperor Troy told me.

Yes, it was fun. It was distracting. But Troy was not Jacques. The anger I felt toward Jacques had turned into a deep and pervasive sadness.

“I want to tell him I don’t want to get married,” I told my friend and confidant Bonni. “I was actually just thinking about schtupping him.” (Yiddish. Look it up.)

“I’ve never done anything like that in my life,” I retorted.

So, I sat at my keyboard and penned an email to Jacques. I could not believe what I was doing, but it was true: What did I have to lose? I really liked this guy. He was worth the potential humiliation. And dammit, I did not want to get married. I have Craig and Lipton, after all!

I spent all day crafting the email and had it in my Drafts folder. At 5 o’clock one Friday in February, I took a shot of Jack Daniels and hit the Send button. Off it went. I took another shot, leashed up my dog Lipton and headed out into a dark, frigid night to walk for as long as I could stand it.

I left my stupid phone at home. Lately, it was only getting me in trouble.