You are here: Home / Adventures / Up the Snow-Capped Mountain 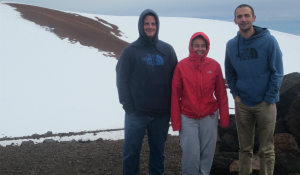 Note: This is the tenth of fourteen parts. Click here to read from the beginning.

Once again, Molly navigated and I drove through rain to get to our place in Hilo. It was dark, and we were antsy and feeling a bit like nomads when we arrived about 7:30 p.m. Molly directed us into a modern complex, and we parked in the spot that corresponded with our room—213. At the door, Molly punched in a code: 1948. We were inside.

“Wow, this place is awesome,” Molly said, seeing a full-sized kitchen and a large living room with a slider to a deck.

“Totally,” I echoed. We couldn’t believe our luck.

Then I saw stuff on the counter. “I think we’re in the wrong space,” I said.

“But the code worked,” Molly responded.

“Someone must have left it behind.”

“Who leaves 30 pounds of rice behind?” I asked.

Then we saw all the other clues—a few pairs of men’s shoes, a keyboard and microphone, a guitar. “We’re in the wrong room,” I repeated.

Confused, Molly checked the original confirmation and discovered we had rented the spare bedroom in a young college man’s apartment. We laughed like crazy and tried to figure out what to do; we realized we were parked in this guy’s parking space.

It was too late, and we were too tired, to find a different place to stay. So, I moved the car, and before our host Nick got home from his job as a helicopter mechanic, we showered and then hunkered down in our bedroom with its two twin beds. The place was super clean, and we were super tired.

We introduced ourselves when Nick came home, and he gave us a suggestion for a running location in the morning. We left so quickly after we rose the next day that we forgot the few items we’d placed in the refrigerator.

After the three-mile jaunt through a botanical park on the ocean—from which we could see the snow-capped Mauna Kea, our afternoon destination—we visited several waterfalls and then headed west, back toward Kona on route 190 to climb Mauna Kea in the Nissan Versa.

We were heading into an artic climate, and Molly, who hasn’t seen snow in two years was giddy with excitement. We had our layers handy so we could pull over and bundle up when needed.

We turned right onto Mauna Kea roadway about lunch time and drove straight uphill on winding mountain roads for six miles. I knew from the guidebook that the visitor’s center was at that point and that the peak was another eight miles up. I intended to drive the Versa all the way up.

We parked at the visitor’s center and pulled on our warm gear while standing in the park area as the temperature had dropped from about 70 down below to roughly 45. Once inside, true consumers that we are, we began shopping. I noticed after a few minutes that I was dizzy and a bit sick to my stomach. I said so out loud to Molly, I thought, but it was another young girl who responded.

“Must be the altitude,” she said.

Molly then told me she’d read a sign that advised people to stay at the center for a half hour to acclimate. That gave us time to finish shopping and read about the astronomy center and observatory at the mountain’s peak. It also gave me ample time to read the dire warnings about driving a two-wheel-drive vehicle, like our Versa, to the summit. It was strongly discouraged as the brakes tended to burn out and fail on the way down. Not a pretty outcome.

Hoping for different information, I asked the park official who rang up our souvenirs if the warnings were exaggerated.

“Darn,” I said to Molly. A skilled troubleshooter, I decided we’d hitch a ride up, and that’s how we met Tommy and Evan, two Navy boys from Oahu on leave. They had wisely gotten a four-wheel-drive rental and made room for us in the truck’s extended cab.

As we ascended, Tommy at the wheel, we talked about our work and our hometowns. I was much more relaxed as a passenger than I would have been as a driver, and I thanked them repeatedly and offered them money, which they declined.

At the top, two people were skiing on the hard crusty snow. A handful of others were shoveling snow in their pick-up truck beds, and Molly, Tommy and Evan made snow balls. It was 32 degrees and windy, and I wondered what the hell I was doing up on a mountain in New England weather when I should have been lying on the beach.

None of us lasted more than five or ten minutes in this chilling weather, but we were exhilarated nonetheless by the view and the radical climate change. We got in the truck and drove down, swapping contact information and friending each other on Facebook.

Now we know a nuclear engineer and a sonar technician.