You are here: Home / All / Thrilled to Meet My Client From London 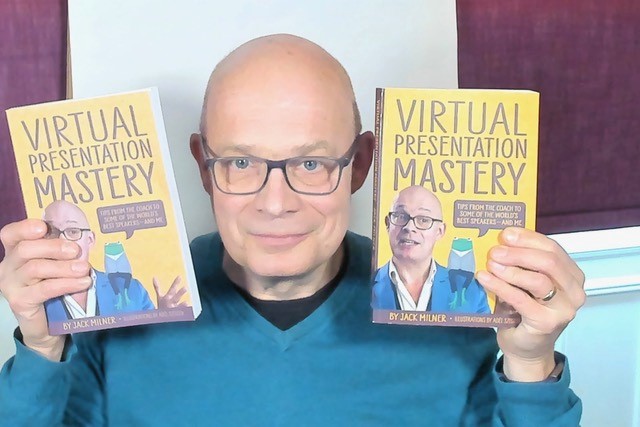 For over a year now, I have been working with Jack Milner, a client from London and the author of “Virtual Presentation Mastery.”

Jack is a former stand-up comedian who is also a playwright; his work in recent years has been serving as coach to presenters at Fortune 500 companies who have to pitch a new concept, idea, or trend to a corporate audience.

In our Covid-saturated world, Jack’s book helps teach those presenters—and all online speakers—how to do what they do better virtually to engage an audience that is listening while simultaneously responding to email, shopping online, checking the weather, or googling all kinds of things.

Initially, I helped Jack refine and copy edit the manuscript, then I designed the book, and shepherded it into the print process.

In a matter of weeks, the book will be available in the US; in days perhaps, in the UK. And the ebook is already available.

So, imagine my delight when I was invited to assist with a conference that took me right into the heart of London, giving Jack and I the chance to meet in person. With me, I had a print proof from the US; Jack had one from his UK printer, and we compared notes.

Jack arrived in the pub he’d chosen, and we immediately launched into nonstop talk as if we’d been meeting in person for a year rather than on Zoom, covering topics like who’s in our family to our work and broader worlds.

After our beer glasses were empty, there was more to say, so we found a small French restaurant to settle in and continued the conversation.

An aside here: the menu had pigeon on it—yes, the kind of bird you see in the park—and Jack declined to order it after learning it is only cooked on one side. Wow. I ordered and ate rabbit for the first time, and while I told Jack I’d have to one day confess to my granddaughter that I once ate Peter Rabbit, I had to admit, he was mighty tasty.

Jack told me about his wife, an actress who records audiobooks, and I asked for an introduction because I may one day have a client whose book should be in that medium. He also spoke about his mother, who was both an author and a playwright. I am hoping to get my hands on her book, “The Churching,” but it’s tough to come by.

I invited Jack to visit New Hampshire if ever he is in the United States. I sweetened the pot by telling him I’d teach him and his family to waterski.

I hope I get that chance one day.