You are here: Home / Adventures / There was Air, Alright, in This Airbnb 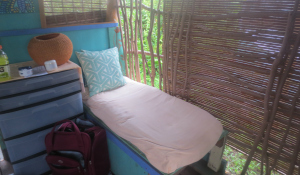 Note: This is the ninth of fourteen parts. Click here to read from the beginning.

In addition to serving as Chief Excellent Navigator, Molly was also in charge of finding us places to stay for the two nights we were on Hilo side and away from the farm. Our first Airbnb reservation was at a place called Lucy’s Camp in Da Jungle, and after we left Lava Land, Molly guided us there while I squinted through the windshield in the teeming rain.

We drove on 11 for a short time and then took minor roads that eventually led to a dirt road, literally in the jungle. Ziggy and Kiki were our hosts and had sent us very specific directions, like “drive 1.2 miles on the dirt road and then take a left at the sign with the red rooster on it.” So we were certain we were at the right place when we pulled in a dirt driveway and parked in the grass.

It had stopped raining, and Ziggy was waiting for us. Molly and I knew there was no electricity at this Airbnb, so I was still wearing the headlamp I’d used to hike out of Lava Land; Ziggy had a headlamp on his forehead, too

“We can take turns blinding each other,” he said, and I knew we would like him.

He led us down a short, winding grass path to our room. As we walked around the side, we saw two blue Adirondack chairs, facing east. A sharp left turn put us in our dirt-floor kitchen; adjacent to it, through an entryway with no door, was our “bedroom” and a small area with a settee and a book shelf.

Our queen-sized bed was surrounded by mosquito net, and the “walls” were screens. Our kitchen consisted of a propane camp stove, an industrial sink and dishes nesting in sealed plastic containers.

Back near the car, Ziggy showed us the bathroom, an outhouse of sorts with a flush toilet and pink shutters as doors. I was a bit freaked out that the bathroom was this far away from our room, but because the place was so quaint and interesting, my unease was fleeting. The shower was near this area as well; it was propane-fired, also had no door and had an elaborate mosaic that served as one wall and an ornate, cement-poured floor, also artistic.

Molly and I loved this place with its whimsical surprises. Molly said this kind of lodging is called “glamping,” or glamorous camping, and I noticed while writing this blog that Ziggy and Kiko’s entry on Airbnb dubs it just that. We felt this was a perfect spot to end a day of adventuring.

Ziggy provided us with a hand-drawn map full of outing suggestions for the next day—each accompanied by an illustration.

In the morning, as the sky began to get light, I lifted my head off my pillow and was able to take a photo of the sunrise. Then I fell back to sleep. I was exhausted; soon after, it continued raining, as it had done all night, and this made me feel in no rush to rise.

Around 9-ish, Molly and I got up and made coffee and woke up slowly in our glamp. We sat in our Adirondack chairs, and then we spent the day following Ziggy’s treasure map, starting with an outstanding breakfast at the Tin Shack Bakery in Pahoa followed by snorkeling in a series of protected tide pools.

It was a cloudy, cool day and so our next two stops, both warm pools fed by volcanic energy, felt delightful on our still-sore bodies. We next drove on a narrow road covered with a canopy of limbs from massive banyan and mango trees for about an hour, arriving about 4 in the afternoon at Ziggy’s final suggested destination: The End of the World.

This area was once called Black Sand Beach, and the beach itself was at sea level; it was obliterated in the mid-80s by lava from an eruption, the same eruption that continued for many years and obliterated the town that became Lava Land. We were now slightly to the north of Lava Land, and as we walked up a black-sand path to what is now volcanic cliffs overlooking the sea, we could see the lava steam plume and the dirt road we had walked in on the night before. For me, it was like fitting the puzzle pieces together in my head.

The plaza at the End of the World had a few small shops. We had dinner in a restaurant much like Northampton’s Haymarket, but it was outside in the open air and run by one young girl who was busier than a one-man band. We had pesto pizza, pea soup and margaritas, and we played cards until the sun set and it got too dark to see.

Then we headed to our next destination, an Airbnb in Hilo.