You are here: Home / All / The Youngest Adventurer 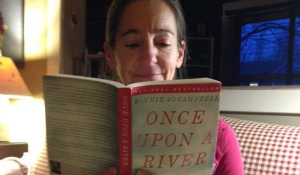 I’ve mentioned that I’m a bit green-eyed when it comes to my adventuring daughter, Molly. Well, now I find myself also a bit jealous of a 16-year-old fictional character who struggles in a life more difficult than I can imagine.

So, what’s up with that?

I am certainly not jealous of the life circumstances foisted on Margo in a book I recently devoured, called Once Upon a River by Bonni Jo Campbell. I had only empathy for her as I ripped through the pages—as she was raped by her uncle, abandoned by her mother, as she witnessed her father’s death from a blast from her cousin’s shotgun, and that was only in the book’s first few chapters. Things got a lot worse before they got better.

Margo had the most painful childhood I could imagine. What I admired, envied even, was that she continued to rise above it all with a spirit and an independence that riveted me, and that a river was the backdrop on which she managed it all.

Margo grew up on the Stark River in Michigan, worshipped Annie Oakley and had a father and grandfather who had faith in her, taught her how to aim, shoot, fire, skin animals and filet fish. Throughout the book, Margo dodges danger of mostly the human kind but also threats posed by weather. She spends nights in the bitter cold with nothing but an old tarp to keep her warm and dry. At 14, she becomes self-reliant, offering up her body and heart to men who take her in; she hunts, cooks and keeps house to earn her keep.

While Margo kicks butt when faced with violence and threats, her will to survive occasionally blurs her sense of right and wrong.

Life looks up for Margo after she meets an older man with emphysema. His name is Smoke. He owns both a traditional home and a houseboat on the Kalamazoo River. Margo approaches him to ask if she can use the shower in the houseboat, and her luck begins to change. From the first scene in which that houseboat was described, and in which I saw Margo’s longing for it, I knew Margo would come to own it, and I was so thrilled for her. She needed to cut a break.

But, well, I was also envious. I wanted that houseboat too!

The boat has a bed, a kitchen, a wood stove and a propane heater. And, of course, it sits directly on the water. You can travel in it, up and down the river with a six-horse engine. What more could a person want? Smoke becomes Margo’s mother and father, and her best friend, and after he dies, he leaves her his actual house on the river as well. Margo is pregnant at this point, and she needs a place to keep her child safe. It’s a poignant and wonderful conclusion to the book. Margo will never have the kind of structured, first-world life we have, though. She has no interest in finishing her schooling, learning to drive, getting a job. We are left to imagine she will hunt and trap and fish and roam the river with her child for the rest of her life.

That’s because the river taught her much of what she learned in that long and difficult childhood. It supplemented the knowledge she gained from her father and grandfather, and from Smoke. The river was her friend, her provider, her protector, her means of escape.

It was the river that gave Margo a will to live, the resources to live and a lifestyle she enjoyed and excelled at.

Margo helps me continue the adventure going on in my mind, the one that started when I read Cheryl Strayed’s book, Wild, several years ago. That was when I started to have the fantasy that I’d like to live on my own, off the land.

But, just for a minute. I am still mulling my next life adventure. Boy, how I’d like to incorporate Margo’s houseboat in it.

Oh, what I could learn from a river.