You are here: Home / All / The Trip of a Lifetime 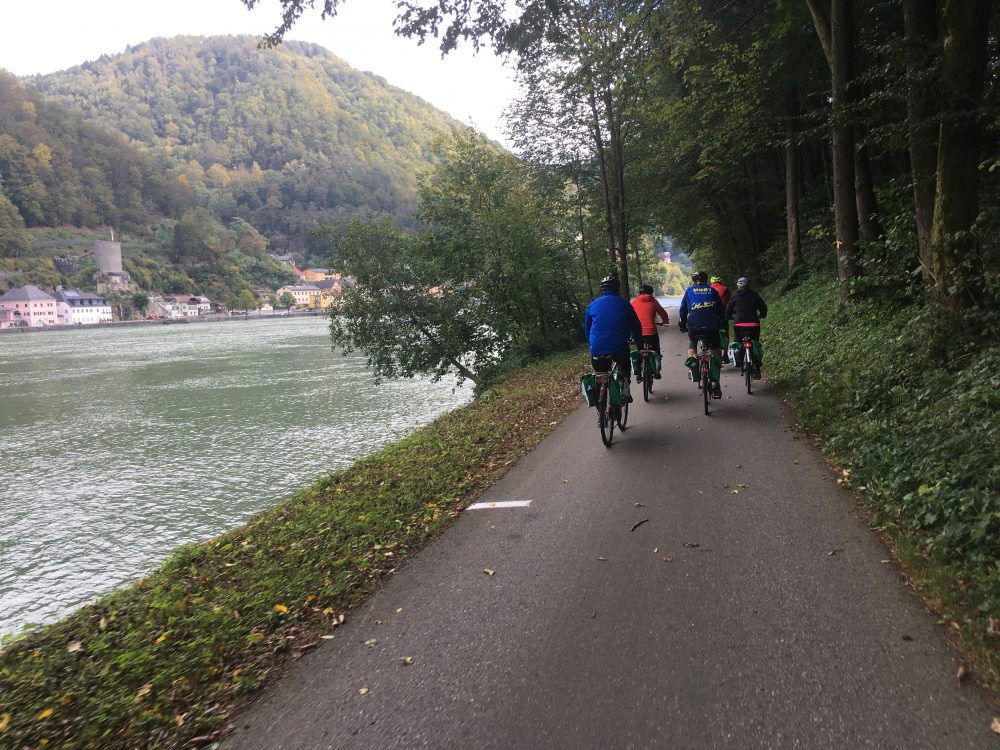 Note: This blog is part of a series on a recent bicycle tour across Austria, along the Danube.

It’s been almost 10 days since I returned home from the trip of a lifetime in Europe. I want to tell you all about it in a series of blogs I start today because it was full of adventure, and it might inspire you to do something similar!

Highlights of the trip included getting engaged on the first night; touring the countryside of Austria on a bike; and visiting three different countries: Germany, Austria, and Hungary. (We also had our toes in Zurich, Switzerland, at the airport, on a quick layover on the way home!)

Over eight days, 16 of us travelled about 250 miles—not 300 as I originally thought—beginning in Schärding, Austria, doubling back to Passau, Germany, and then heading on to these locations in Austria: St. Agatha, Linz, Ardagger, Emmersdorf, Krems, and Wien, which is Vienna, I learned.

After a few days of celebration in Vienna, we took a train to Budapest, Hungary, where we spent the last three nights of our vacation and took a guided bicycle tour of the city.

We ate like animals—brie, more salami and bologna than I have ever seen, wienerschnitzel (breaded veal), spätzle (a noodle), gnocci, and ghoulash. We also discovered German beer, Austrian wines, and absinthe.

For most of the bike trek through Austria, we hugged the Danube, Europe’s second longest river. It was wide, flowed quickly, and had a lovely greenish tinge. We also meandered through farms, villages, and vineyards. I drank in the views. I thrived on the physical exertion and constant activity.

I was awestruck by the beauty of Austria. There were so many churches and spires and homes older than any I’ve ever seen before. Buildings weren’t made of steel but stone and brick and mortar.

People had pride in ownership. Homes were well-maintained, eclectic, and interesting. Almost every yard was pristine and had some unique feature that we hadn’t seen yet, such as a creative sculpture or a fence with slats on the diagonal instead of straight up and down.

There were window boxes full of petunias and other flowers in bloom. And I’ve never seen such gigantic butterfly bushes; they were everywhere.

The people in Austria were warm and friendly and eager to talk to us and were very forgiving of our ridiculous grasp on the language. We met people we really connected with, and soon I’ll tell you about a few of them. We also had much fun with each other.

Talk about over-stimulation, though. Being with 15 people for much of every day, exercising for hours, and moving from one activity to the next with only a shower in between—and sometimes not even that—kept the mind active, to say the least.

We returned home in a trip that took 16 hours, plus a six-hour time change; that meant we were awake for over 24 hours. It’s taken this past week for my brain to calm down, for the racing dreams to stop. When I sat at my desk last Monday, I had to relearn things—like my system password and how to attach something to an email.

That’s why it has taken me so long to pen this first blog. I had to figure it all out again!

In the weeks ahead, I will tell you more trip stories! Stay tuned.