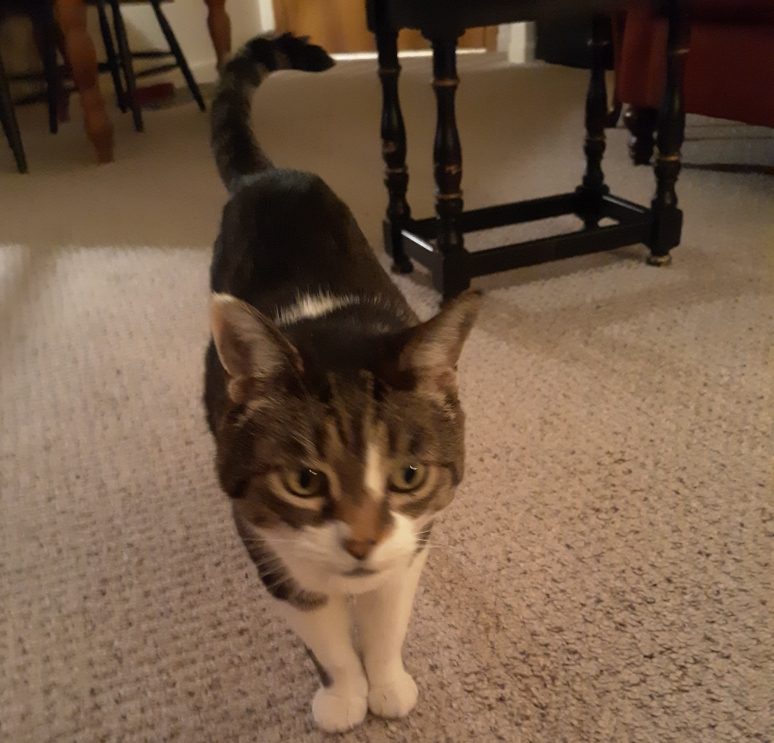 I haven’t written a blog since last November because my inspirations dried up for time. Life took a turn toward the shit pile mid-way through last year. I feel like ranting about it for a minute.

Starting in July, when the motorcyclist crashed in my driveway, it’s been a steady downhill descent, and, I don’t mean just for me. After all, July was far worse for that man on the bike and his family.

The decline started slowly with a month full of rain in August. In September, Jacques broke his leg while we were hiking. (Stay tuned because I’m going to tell you that story next time.)

Then, my father got sick and passed away, and my mother moved into an assisted living facility. Grieving while also watching her cope with the multiple losses—her husband of 68 years, her home and all that went with it, her car, her independence—has been sad for the three Beetle children and our respective families.

Not one damn thing is familiar for Mom. Well, just her cat, Molly-Wally, so named because when my parents first got it, they thought it was a girl, but it isn’t. That cat made my mother’s transition so much easier than it could have been. An outside cat for 16 years, Molly-Wally transitioned to “indoor cat” without so much as a meow.

Mom has had to learn how to live communally, comprehend a cell phone instead of a landline, and decipher all new channels on her television. She’s met dozens of people in these past months—a lot of new names to remember—and she has people sticking their noses in her business all day long.

Mom has been nothing but stoic, which is typical. Molly-Wally helps make that possible. My mom feeds Molly-Wally the dregs of her morning cereal, talks to him all day, and brushes him in the afternoons as Molly-Wally purrs and juts out his chin, guiding the brush to the best place.

Still, my mom is damn sad.

It all kind of sucks.

But the thing is, this is the good news that has been swirling around me. Many of my friends are dealing with offenses so much greater. My heart can’t help but absorb their pain like a sopping sponge.

One friend lost an adult child not too long after my father died on Oct. 25, 2018. As I mourned my dad’s loss, while packing my mom and gearing her up for the move, any time I became aware of self-pity, I’d stop myself.

I bumped into my friend a few weeks ago. She looked vacant, and I felt her devastation like an open wound; I felt the throb, the ache that never leaves your heart. I wished I could suck some of it from her, bear it for her for a time, find a place to quietly, respectfully discard it, but, alas, what I could do instead was give her a hug. Two hugs.

Hugs and prayers are what I have to offer to the friend who was diagnosed with Hodgkin’s lymphoma around the holidays.

Big fucking deal. Her life has become something nearly unrecognizable. She is learning about things she did not need to know.

So, as you go through your day, when you think you’re in the shit pile, take a moment to get grounded. Know that we are all scooping from that heap and that others have unfairly taken on a larger load.

My hope is that my friends in crisis—and everyone in physical or emotional pain in the world—have a Molly-Wally to count on—someone or some thing, leading them from one moment to the next.

Please, 2019, dole out a little less shit and more Molly-Wallys.