You are here: Home / All / The Long Road into Nonfiction 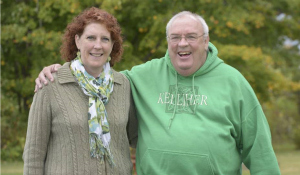 Judy Kelliher has been a writer and reporter for more than 30 years. She has interviewed hundreds of people—from athletes to scholars to regular folks—for newspapers, magazines and brochures. Interviewing her brother Bobby for a book she is writing about his two tours in Vietnam, though, was unlike anything she’d ever done.

Judy, 55, of East Longmeadow, started interviewing Bobby, in 2014. They met on Saturday mornings and talked for hours. Sometimes the conversations were difficult, bringing up painful memories for Bobby, such as the deaths of fellow soldiers or almost dying of malaria himself. Other times, they were able to laugh and reminisce about growing up in a big Irish Catholic household, and they bonded in a way that they weren’t able to while growing up due to their 12-year age difference.

Judy’s book “focuses on the good, the bad and the ugly of Bobby’s service in the war.” It transcends a timeline from the time right before he enlisted in the Army—19—right up to the present and his views today, at 67 years of age.

Now that she’s this far into the project, Judy admits she was naïve to the intense time commitment that would be involved, and this makes the project an on-again, off-again one.

Recently, Judy joined Janice on a weekend retreat as a belated birthday gift to work on the book. They’ve been friends since 1985 when they were both newbie journalists working for the Springfield Morning Union (now Springfield Republican). It’s fun for them that they now also have in common a book-in-progress.

“Scheduling the weekend forced me to focus my energies on the book and didn’t let my other obligations get in the way,” Judy says.

Judy is in the writing stage of her third-person narrative, using many hours of recorded conversations as the basis for the story. Before the retreat, the prologue and first chapter were written. During the retreat, she “wrote rough drafts of chapters two, three and four and am happy with the way they turned out.”

She has only worked on the book briefly on a couple of occasions since the retreat. She is meeting with Bobby this week to ask him follow-up questions regarding material in the first few chapters.

Judy started working part-time as a staff writer and photographer with the Springfield College Office of Communications in July 2015. She spends time writing and editing for the college’s alumni magazine, Triangle, as well as editing and proofreading a variety of material that comes through the communications office. Judy also does some freelance writing, making it difficult to devote time to the book.

At a minimum, Judy’s goal “is to have an accounting of Bobby’s experiences before, during and after the war just for him.” She is fine with whatever he has in mind for the book, whether it be sharing it with friends or family, wanting it published or even if he chooses to not show anyone but himself. “Truly, it is most important to me that my written words are what’s best for Bobby,” she says.

Having taken on such a long and difficult endeavor, Judy has been learning from it. She learned the importance of being realistic, but also to not be afraid of taking something on that is outside the comfort zone. Her admiration for her brother continually grows as she learns more about him.

“Since I started this project, I have even more respect for Bobby’s service to our country,” Judy says of her brother.