You are here: Home / All / Telling Stories to Fight Back Against Cancer 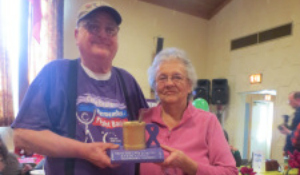 They call them Mr. and Mrs. Coffee.

That’s what happens when you are on the giving end of the coffee booth at the American Cancer Society’s Relay For Life of Hampshire County for 14 years. You get known for your generosity.

This year, the Relay leadership recognized Elsie and John Waskiewicz of Hadley for their past contributions – donating the coffee and tea and manning the station for the full 24-hour event. But each of the Waskiewiczes were also both honored as cancer survivors who have taken turns caring for one another.

They were named this year’s Honorary Survivors and Caregivers on Feb. 1 at the kickoff event for the 2014 event. As the person who oversees the publicity, I attend the pancake breakfasts each year with an intern. This year, I was accompanied by Alaina Leary, a junior at Westfield State University.

Alaina and I interviewed survivors at the breakfast – like Elsie and John – so we can tell their stories over the coming months, as Relay approaches, in hopes of raising awareness and in hopes that Relay raises more funds.

We interviewed seniors, teenagers, and everyone told a similar story: Cancer has robbed them of loved ones, and they Relay to fight back.

As someone who has lost a brother, many other relatives and friends and my husband, Ed, to cancer, I totally get it. That’s why I Relay too. I like the pancake breakfast because it lasts the morning only – not the full 24 hours of Relay – and so I am immersed in grief for only a short time.

I appreciate the opportunity to tell the stories of others as that gets me outside of myself and my own pain and allows me to support the cause.

Elsie is 72, and she and John have lost one of their five children, daughter Nancy; a brother and each of their mothers to cancer. A second daughter, Karen, is a colon cancer survivor.

“We have a lot of cancer in our lives,” Elsie says.

She and John got involved in Relay in 1998, a year after their daughter died of Hodgkin’s Disease. For 14 years, they donated the coffee, with assistance from Serio’s Market of Northampton as a sponsor, and manned the booth overnight, taking short breaks in the middle of the night to sleep in the car.

Last spring, after being diagnosed with endometrial cancer after a hysterectomy, Elsie underwent chemotherapy from January to April, and then tried to man the booth in June.

“It was really too much,” she says.

John, 75, is a bus driver in Northampton, and he was diagnosed with basal cell cancer in 1990. He had surgery on his nose, including reconstruction surgery that involved his forehead and right ear. Both he and Elsie are in remission.

They described what it was like to care for one another during each of their illnesses. Elsie said a family member was required to attend her first chemotherapy session, but John was frightened, so her sister came in his place; he came afterwards each time.

“I thought about just getting take-out,” John says, smiling.

This year’s Relay will be held June 13-14 at Look Memorial Park in Florence; the financial goal is $280,000. To get involved as a volunteer or to donate, email hamprelay@gmail.com.