You are here: Home / Adventures / Swimming with a Manta Ray 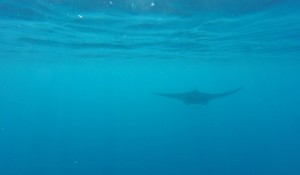 Note: This is the fifth of fourteen parts. Click here to read from the beginning.

As they are in many places across the globe, the coral reefs are dying here in Hawaii, but there are many places to snorkel and take in incredible sights.

In our first days here, after a visit to Pu’uhonua O Honaunau—a national park that pays tribute to an ancient refuge I will write about later—we snorkeled at an area called Two Step, aptly named because you enter via two steps made of volcanic rock.

Poor Guy loaned me his wet suit so I was warm and toasty as I swam among the Tang and Angel Fish.

I find snorkeling to be the most relaxing experience. I swim hard to find creatures, and then stop and float above them, taking in the unusual world of rock ledges and caves and corals. I get as close as I can, studying live, spiny, sharp sea urchins and fish feeding on the coral.

I love the sound of the snap and pop I assume is the coral itself and also the rhythmic sound of my own breathing through the snorkel.

I inevitably must quit when I get cold, even with the wetsuit, but I leave unwillingly.

Molly has recently been certified as a scuba diver, and she has spent some time here trying to find someone to dive with, without luck. But she is satisfied to snorkel with me. She dives deep down as if she was diving and has gotten great images with her new GoPro camera.

Our best trip so far has been in a small cove near the Captain Cook monument. We hiked in there on Christmas Day and could clearly see from shore that there was great snorkeling to be had. Yellow Tang were nestled in large and feisty schools only a few feet away.

A few days later we rented a tandem kayak and paddled about a half hour or more over near the monument. The very strict rule is that you cannot pull the kayak on land. You must stay in the water. So we jumped overboard and became one with the reef, which was a work of art over there.

We snorkeled for hours, in several sessions, even swimming for about 20 minutes with a giant manta ray, who seemed to find us amusing.

We spotted it at first from the surface after seeing people point at it and then jump in with their gear on. After they re-boarded their boat, we jumped in to play.

I was nervous at first to approach the ray, but after swimming behind it for about five minutes and watching it feed on the plankton with little interest in me, I got close enough to touch it. But I didn’t.

The ray was graceful and sleek, gliding effortlessly about with two gently articulating fins. I had a side view and struggled unsuccessfully to see its face. Its gills, on its underside, were massive and pronounced, looking almost like protruding ribs.

We could have followed the ray around all day, but thought we should leave well enough alone. It must tire of humans gawking at it while it is simply trying to take in a meal.

We also saw many other interesting creatures in this bay, such as Convict Tang, Needle Fish and red and black urchins bigger than our heads.

The deep peace under the sea almost makes me long for gills.