You are here: Home / All / Stepping Back in Journal Time 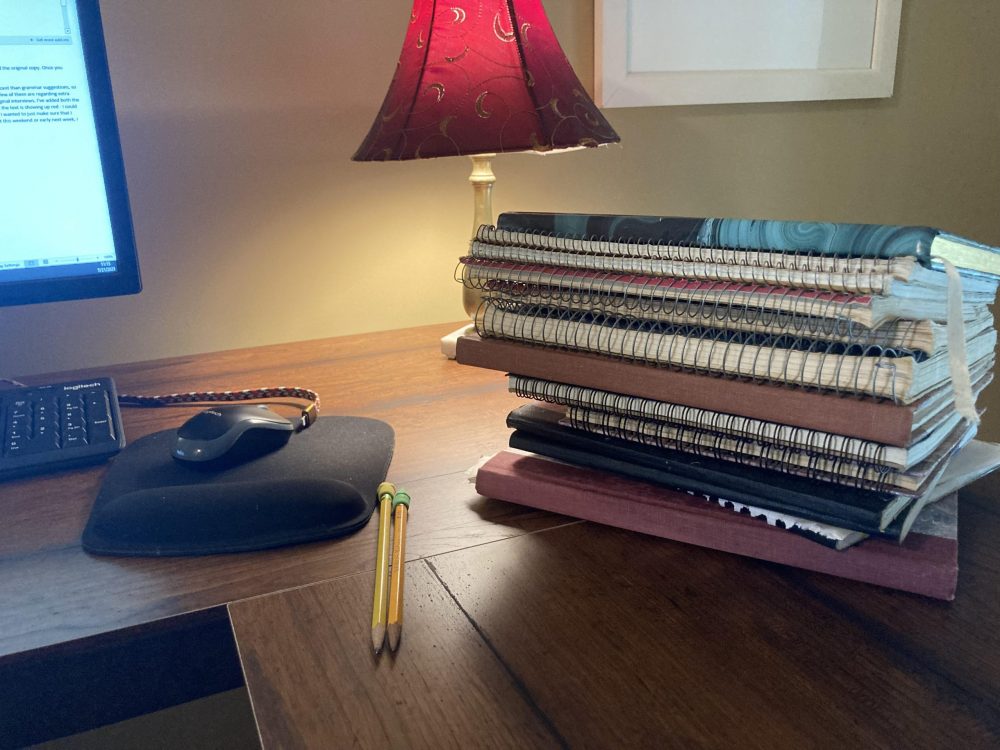 When Steve and I did our phase two of three moves a year ago, I made a mental note that a large plastic tote that made its way into the attic held several dozen bound journals of my creative writing. Over the past two weeks, while on a vacation at our New Hampshire house, where we will move at the end of September, I organized these volumes by date.

And I started reading these cloth-bound books in order to see what caught my fancy 30 years ago.

The first two journals were small, roughly 6×9, and they read like a diary. They covered the years from 1987 to 1992 and, in entries that were sometimes months apart, I told the stories of my first marriage, first pregnancies, and first angst over having an ex-wife in my life.

There were no surprises, but I enjoyed some of the passages about my older daughter Sally, and I plan to type them up for her as a gift.

The fun came as I dipped into the journals that are larger, the same size as an 8.5 x 11 piece of paper. I was pleased to discover that in these books, I wrote only fiction, and some of it was quite good.

I’ve only gotten through two of these tomes so far, and I’ve unearthed stories that reveal both my empathy at the time towards young children in bad home situations and my fears about my children and protecting them from violence.

Many of my stories have young protagonists, from young children up through teens. They are either in dangerous situations, or they are navigating awkward adult conversations. Sometimes, they are simply enjoying life in the kind of serene setting I grew up in on Lake Winnisquam in New Hampshire.

So, there is a mix of Little House on the Prairie type work and that in the Law & Order SVU and Stephen King genre.

In one short story, Stephen King comes to the lake house I grew up in to ask my mother and I if he can live there for a time and set his next story there.

It’s kind of fascinating, really, to trace the roots of some of the stories. Clearly, some characters were modeled on people in my world back then, but others come right out of nowhere, and I can’t imagine what sparked the imagination.

Some of my favorite character descriptions gripped me, but then the story just ends. Damn. Why didn’t I finish?

One is about two young teenage girls; one confesses to the other that she is a lesbian, and the friend faces a moral dilemma that does not come to completion. I would like to think I can finish that one now. And how interesting how different “coming out” is viewed now for teens. It is so much more acceptable today than it was three decades ago. Thankfully.

I was in a writing group while I kept these two particular journals. We met every other week and wrote based on prompts the leader gave us; some stories begin with that prompt. But I also was writing nearly every day. I remember I used to get up early, before my young children, and write for an hour or so each day.

That was before I worked full time outside the house. I hope someday to return to that form of meditation. It’s so soothing and creative.

I will continue exploring the depths of my twenty-something-year-old mind, continuing to read through the stack of books.

I hope to transcribe some stories and share with you, too.