You are here: Home / Books / Sharing the Prologue of Willful Evolution 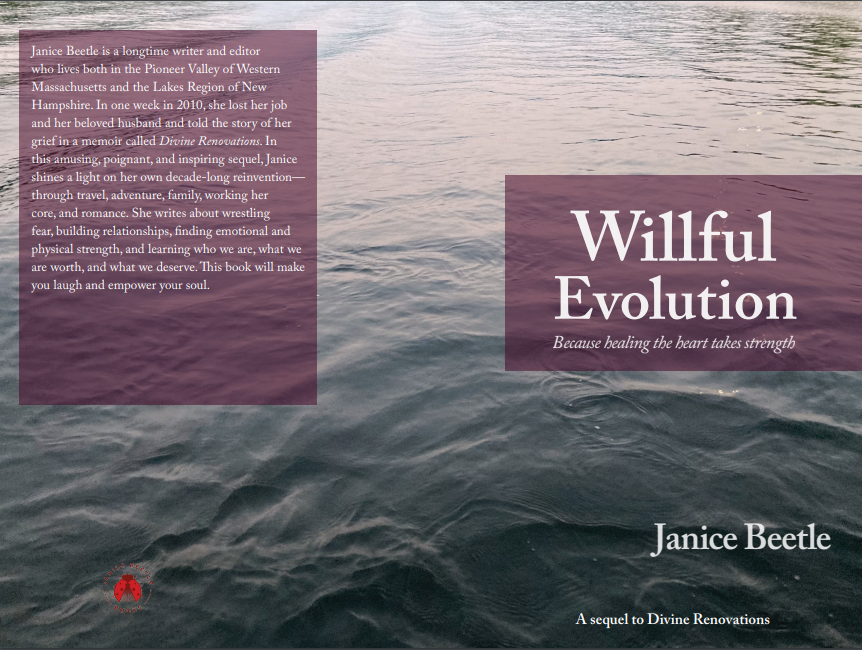 I have promised an excerpt from “Willful Evolution,” and today, I deliver. What follows is the book’s prologue.

My second husband, Ed Godleski, died in September 2010, four months after a terminal lung cancer diagnoses was dropped on us like a four-slice toaster in a bubble bath. I had been laid off from my job four days earlier. It was the worst week of my life, and it ushered in the worst year.

I wrote a book about my grief journey called Divine Renovations, and I self-published it in 2011. The book tells the story of the jolt that was Ed, coming into my life in 2002, and the tight bond that was created between us almost instantly, growing exponentially stronger over time.

Our story was also my story of learning the importance of emotional connection, trust, and unconditional love in a marriage. I lost it all, abruptly and traumatically, along with the companionship and compassion I thought was lifelong. It was debilitating.

When Ed died, it felt I had lost everything, but I soon recognized that what I had left were the things I needed most—my daughters, Sally and Molly, and my grandson Eli. Yet, I was weak, rudderless, and needy.

Divine Renovations ends on a note of hope, as I came to realize that what was also left for me was me. But at that time, I didn’t know one redeeming thing about myself.

That was a decade ago. I began a long fight to strengthen and rediscover—or, more accurately, finally discover—myself and grow up.

I created a blog site, JaniceBeetle.com. Initially, it was a personal endeavor, focused entirely on grief, grieving, my book, and the readings I was holding to promote Divine Renovations and sell it. As I reached across Western Massachusetts, sharing my story in venues from bookstores to living rooms, I heard the stories of others who were grieving, and my blog became about them as well.

Time passed. After a few years, I moved into a new phase of life, and my blog did, too. I began to write about my own creative writing, local authors, and little by little, I wrote about what was happening in my life. And then more time passed, and I got bolder in what I was sharing, blogging about dating, finding personal strength, seeking adventure, and travelling.

Last year, as I approached the tenth anniversary of Ed’s death, I asked my interns from the fall and spring semesters to choose their favorite blogs that posted over the past decade; I had thoughts about compiling a “Best of the Blogs” book. As I reviewed their picks, I realized the posts, seen in their entirety, told a story of finding myself. They show how much I have transformed since that major loss ten years ago, how much I have grown as a person—and how I have grown as well.

I have reinvented myself, slowly and deliberately, blogging about it all the while. For me, the categories in this book were the somewhat accidental components of my willful evolution— travel, family, working the core, romance, bad shit, and adventure. The book moves through these sectors the way I did in life, the way we all do, one at a time. Back and forth. Sometimes all at once.

My original plan was to compile the best-of blogs and also write a memoir on dating and finding Steve, the love of my life. I am very satisfied, though, that in this work, I’ve achieved both goals and said what I wanted to say, which is this:

Success and fulfillment don’t come to you from others. You have to create them in yourself.

Sometimes our fear keeps us safe, but more often, it gets in the way of the things we want. We need to figure out the difference and push past the doubts that are holding us down.

When we are lost and lonely, we shouldn’t set out looking for a partner. You will never find what you need that way.

You must set out looking to find your center. Then, when you’ve found your inner strength, you work your way out, using it to strengthen the bonds around you.

You can’t love anyone well—parents, children, grandchildren, siblings, a partner, or friends—without loving yourself first. Without knowing who you are. What you want and need. What you are worth. What you deserve.

This books tells the story of how I learned these most basic truths.

Note: I am still working on this manuscript. I’ll tell you more about that in the coming weeks.