You are here: Home / All / Seasoned Journalist Nominated as 2015’s Professional Writer 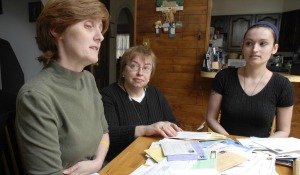 Ever since she was a student at Northampton High School, Cynthia Simison knew she wanted to be a journalist. Now in her 50s and the managing editor of The Republican, her love of the field has only grown, as has her drive for sharing other peoples’ stories.

Cynthia initially decided to pursue journalism because of her love for the Boston Red Sox. She hoped that one day, she would be able to cover the team, and she sought opportunities that would help make her dream come true. During high school, she worked in the news room at the Daily Hampshire Gazette, where she first got a feel for work as a reporter.

“What I really liked was talking to people one-on-one and sharing their stories,” Cynthia says. “I learned the concept that everybody has a story. Everybody’s life matters.”

After graduating high school, Cynthia attended Syracuse University, where she earned a bachelor’s degree in newspaper journalism and political science in 1977. Having completed a summer internship with The Republican’s predecessor, the Springfield Daily News, she fell easily into full-time work with them in 1977.

Due to her decades of experience in the field, Cynthia has recently been nominated to receive Western Mass Women Magazine’s Professional Writer award for 2015. The magazine draws together a yearly list of local “Women to Watch” and gives awards based on profession. It is the second year Cynthia has been nominated.

Janice hopes Cynthia is selected as this year’s recipient for her skill, experience and huge heart. Janice freelances for Cynthia, follows her column and has known her as a professional for many years. Back in the 1980s, when Cynthia worked for the Springfield Daily News, Janice was writing for its companion paper, the Morning Union. She sees clearly Cynthia’s passion for the job and her passion for supporting the community through the sharing of news—and, as Cynthia says, stories.

At the launch of her career, Cynthia’s work with the newspaper didn’t include covering sports, as she had originally hoped, but Cynthia found that by covering local, hometown stories, she was able to feel personally connected to her sources, coworkers and even her readers.

“People in the 1970s and ’80s were picking up the newspaper every day and reading it, so writing for the paper was a chance to be part of a community,” Cynthia says. The connections she has made as a reporter, Cynthia says, have really been the greatest reward of her work.

Cynthia became the newspaper’s managing editor in 2005 and continues to write regularly and offers a Sundaycolumn, in which she likes to focus on topics that her readers will find fun and enjoyable. “I (like to) use the column as a place to encourage people to slow down and appreciate life,” Cynthia says. “I try to find topics that are a little off-beat or interesting.”

Cynthia enjoys the freedom to pick and choose what she writes about and feels that it gives her a chance to really explore the depth of each story.

Cynthia wrote one of her favorite pieces of her career last October. The Holyoke Soldiers’ Home and Honor Flight New England jointly organized a trip that would bring World War II veterans to see the war memorial in Washington D.C. Because her own father had served in the war, Cynthia was interested in the story from the start. She traveled with the veterans to the United States Capitol for what was a very emotionally touching journey.

“It was without a doubt one of the most moving things I’ve ever experienced,” she says. “These were 80- and 90-year-old men and women who were in tears that somebody cared enough to do this for them. They got to see how the nation cared for them.”

Outside of her work as a journalist, Cynthia is a board member for the Food Bank of Western Mass, and she participates on two scholarship committees: the Valley Press Club, which gives scholarships to high school students pursuing careers in journalism, and Dollars for Scholars, which supports Northampton students.

In her spare time, Cynthia enjoys gardening at her home in Northampton and reading nonfiction and mysteries. She also enjoys spending time with family, friends – who she says are often as close as family – and, especially, her three nieces.

We encourage you to vote for Cynthia as 2015’s Professional Writer.