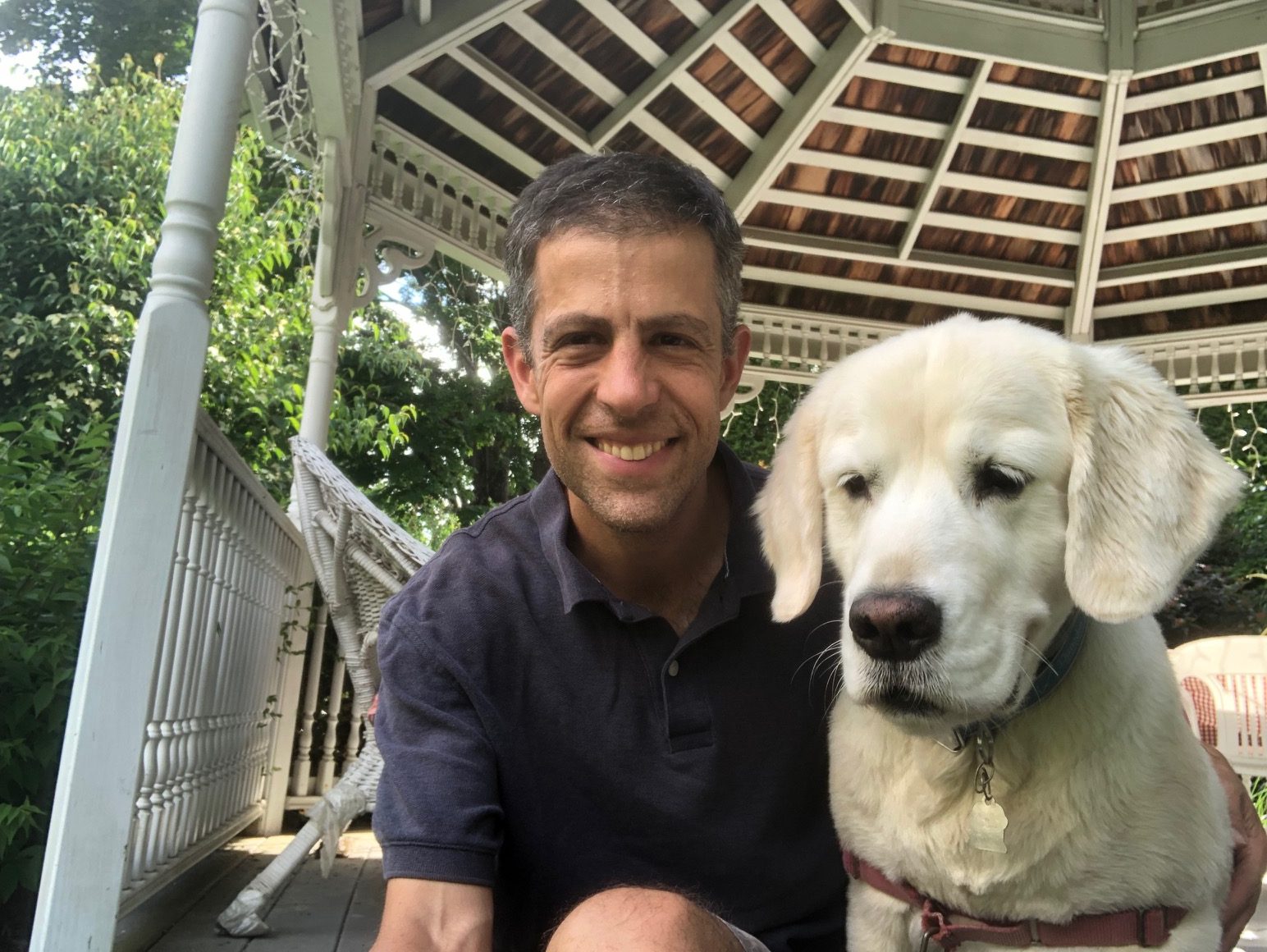 In Pod Three, Grammy talks more about her inspiration to write as a child and reads more poems about pets. Eli interviews a friend, Craig Fear, and he tells a story about his dog and talks about the books he writes. Please share this post! Click here to start at the beginning of the Poem Pod series.

Grammy: Hi, Eli and I are here, bringing you Poem Pods—fun poems for fun people! And guess what, we are still smiling under our masks. How are you today?

Eli: We hope you’re going to do something fun today—or you already did!

Grammy: Well, I’m going to do something fun today. I’m going to tell you about another thing that inspired me to be a writer when I was young and that was the book Harriet the Spy by Louise Fitzhugh when I was in fourth grade. Back then, Harriet was the same age as me. She liked to spy on her friends and take notes about them in a notebook she kept hidden—until her friends found it and what Harriet had written made them sad. I didn’t like that part, but I liked the idea of watching people and observing the things they did and writing them down. So, I got a notebook, and I started writing about things that happened around me.  Eli, have you read Harriet the Spy?

Eli: I have not read Harriet the Spy.

Grammy: Like, in a stealth, Ninja kind of way?

Eli: Yes. I do like spying in a stealth, Ninja kind of way!

Grammy: Sorry. Today’s poems are about two animals I have now: Ricky, a cat who is 17, and Lipton, a dog who is almost 9.

He loves eating,
Chasing squirrels
And lying on the ground.

She’s sweet
A pleaser.
Her heart is open wide.

She loves begging.
And belly rubs,
While sprawled upon her side.

Grammy: I should actually say that Lipton was my dog. She lived with me for about eight years, along with my friend Craig. Then, Craig moved out. He and Lipton were best friends—really best friends—so I let Lipton go with him. They would have been sad without each other. Eli, whaddya say that we invite Craig on right now to tell a story about Lipton?

Grammy: Eli, you can interview Craig for us.

Eli: Craig, how is Lipton these days? Does she still beg at the table for food?

Craig: Well, Eli, of course she still begs at the table for food. She’s a dog. That’s what she does. I’m sure you remember her well, begging. We’re still working on getting her to lie down and behave herself, which she does most of the time. She’s doing really, really good. She’s very happy and getting her daily walks and of course her daily tummy rubs. She’s happy. She’s doing good. But she misses you guys for sure.

Eli: We are teaching kids to tell stories. Can you tell us a story about Lipton, maybe something that made you laugh?

Craig: Oh, Wow. Lipton makes me laugh every day. I’ll tell you, I’ll give you some video evidence of this, and Janice you can put a link to it. Lipton likes to howl at airplanes, and we have a military base around here with a type of airplane that has a very high-pitched kind of sound to it, like a coyote.

Craig: Exactly like that. And when Lipton hears it, she gets all excited about the airplane. It’s the funniest thing. It always makes me laugh. I have a YouTube channel for her, capturing all my funny videos of her. It’s hilarious to watch her howl at the airplane.

Grammy: Excellent. We will link to that.

Eli: Anything else you want to say about Lipton?

Eli: That’s cool. Hey, Craig, you’re also a writer aren’t you! Tell everybody what you write.

Craig: I am a writer. I write about food, and I have a food blog. My last name is “Fear.” It’s kind of a cool last name, and so my blog is called Fearless Eating.net, and I write about food from my perspective and a lot of perspectives on food today. I’ve written books on food, and I’ve written two cookbooks on soup actually. And I’m working on my fourth book. That’s what I do.

Eli: That’s cool. Got anything inspiring to say? Or a tip?

Grammy: Like a writing tip, not a life tip.

Craig: Well, I’ll say that I’m a bit of an accidental writer. I didn’t go to school for writing. It kind of happened. I started a blog and started writing about food, and one thing led to another, and it led to a book and then a cookbook and then another one. I guess my tip would be that if you have a book idea, something you want to share, something inspiring, or a skill you have that you’d like to teach other people, that it’s easier today to publish a book than it’s ever been before. Traditionally, you needed to submit a proposal to a publishing company, and it’s very competitive and difficult.

Grammy: I think you had them at inspiration. Kids, if you get inspired, go with it!

Craig: Right. If you get inspired, go with it!

Grammy: Thank you, Craig. Thanks for coming on our Poem Pod show!

Eli and Grammy: That’s the end of the third Poem Pod. Remember… We are smiling under our masks, and we hope you are too!

Craig: I’m a big believer in using social media to tell stories. Tell Janice a pet story in the comments for this blog, or on her Facebook page at Janice Beetle Books! It’s fun!