You are here: Home / Poem Pods / Pod One: Meet Janice, Eli, and the Family 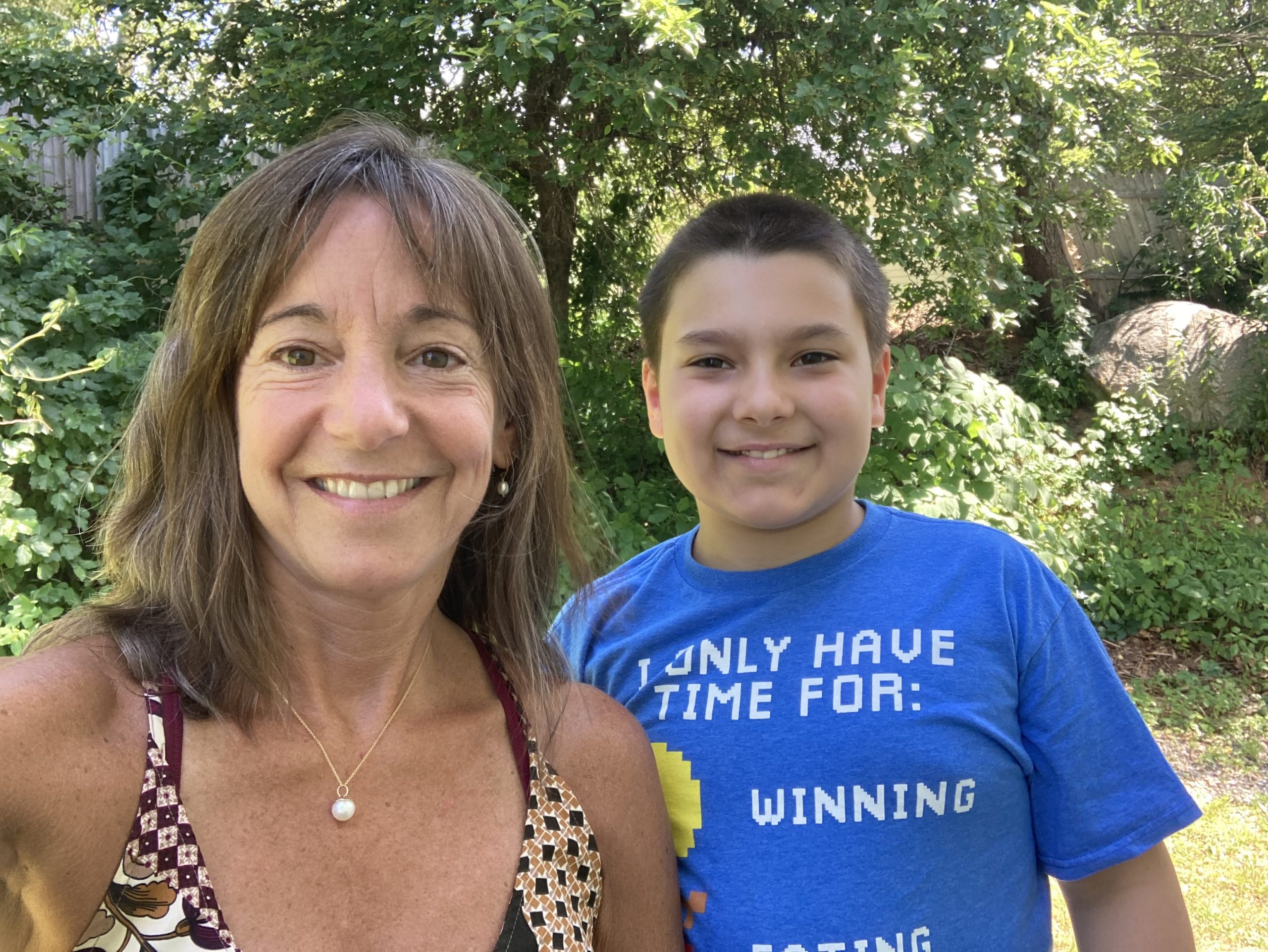 Note: In Pod One, you’ll meet your narrators, Janice (known as Grammy in Poem Pods) and her 11-year-old grandson, Eli. They explain what Poem Pods are, and Grammy reads a poem to introduce you to people in her family—who you’ll meet later in interviews about their work and their writing! Please share this post! Click here to start at the beginning.

Grammy: Hi everybody. I’m Janice Beetle, and this is my grandson Eli.

Grammy: We are excited to bring you the first installment of Poem Pods—fun poems for fun people! Keep in mind we are doing this outside to social distance—so you might hear traffic and other noise, like birds. And we are low-tech, so just accept us as we are!

I’m a writer, and I’ll tell you more about that over the next few days. I love writing because I think it’s fun to tell stories. Poems are really just short stories that can rhyme.

Here’s how I got the idea to share my poems with you:

I have two daughters, Sally and Molly, who are all grown up. Sally has two kids of her own.

Eli: I’m one of them, and now I also have a baby sister named Phoibe!

Grammy: Phoibe was born in March, when the coronavirus came. She is very small and had to stay in the hospital for awhile, so I couldn’t meet her. I still haven’t.

Eli: Neither have I!

Grammy: I started reading storybooks to Phoibe so she would get to know me. I recorded them on my phone, and texted them to Sally and Phoibe’s dad, Tommy. They played the stories for Phoibe when they visited her. I sent the recordings to Eli, too. He’s almost 12. I wasn’t sure if he was listening.

Eli: I wasn’t. I knew all the stories.

Grammy: When I read in the newspaper that there would be no school for the rest of the year and no summer camp either because of the virus, I started thinking about children who were at home, either alone or with parents who were trying to work in the house. I thought they might not have many new stories either. I wanted to give them something new to listen to, or read. I remembered the poems I’d written years ago for Sally and Molly as birthday and Christmas presents. I dug them out. I showed them to Eli to get his opinion. Did you like them Eli?

Eli: I did! They were funny, and weird.

Grammy: Now, we’ll start sharing a few with you every day as Poem Podcasts, or Poem Pods.

Today, I’m offering one long poem that I wrote recently to help you meet my family. Tomorrow, I’ll introduce you to the family pets. Later, we’ll get to the silly poems I wrote over the years for my girls. They’re about things like fairies and clowns, being tired and playing games, and friends and love.

When I started out in life

My family was two brothers—

Plus, a mom and dad.

Now, I have girls, boys,

Three grandkids, and a hubby.

Their antics bring me joys.

Sally is my oldest girl.

She nurtures her two kids.

And her patients too.

She also walks, plays games, and

Molly is a sweet teacher.

In a classroom in Vermont.

She jogs around a lot,

And paddles a canoe.

They’re a great pair, those two.

Sal, she married Tommy, and

They had three little kids.

Eli is a smartie pants,

Sucking on her bottle.

Eli has a big brother.

And his name is Darrian.

Steve is the man I married.

A gray beard upon his face.

He has three tattoos.

On a bike he flies,

When not at work as a controller,

Talking planes down from the skies.

Steve has three kids of his own.

Amanda is the youngest;

All our kids are friends.

We all do things together,

The matriarch of the gang,

I am both mom and Grammy.

A long time ago,

I sang in a band,

Now, I read and write all day,

And sometimes fly across the land.

Grammy: That’s what I’ve got for you today. I hope you liked the story of my family told in a poem.

Eli: Here’s something YOU can do… Make a list of who is in your family. Who are your grown-ups? Your brothers and sisters? Everyone who lives in your house? Write down what they like to do. Try turning it all into a little story, and maybe draw a picture to go with it. If you don’t write yet, draw a picture!

Grammy: I’d be so happy if you posted your story or picture—or both—on my blog site or Facebook page, or if you told Eli and me who is in your family!

Eli: We want to get to know you, too!

Grammy: If you sign up for my blog, you’ll get an email every day with a new Poem Pod.

Eli: And a new activity idea from me, too!

Grammy: By the way, Eli and I are tired of social distancing and seeing people wearing masks. It’s hard when you can’t see peoples’ faces. When you can’t see their smiles. We want you to know that we are always smiling under our masks. We hope these poems make you smile under yours.