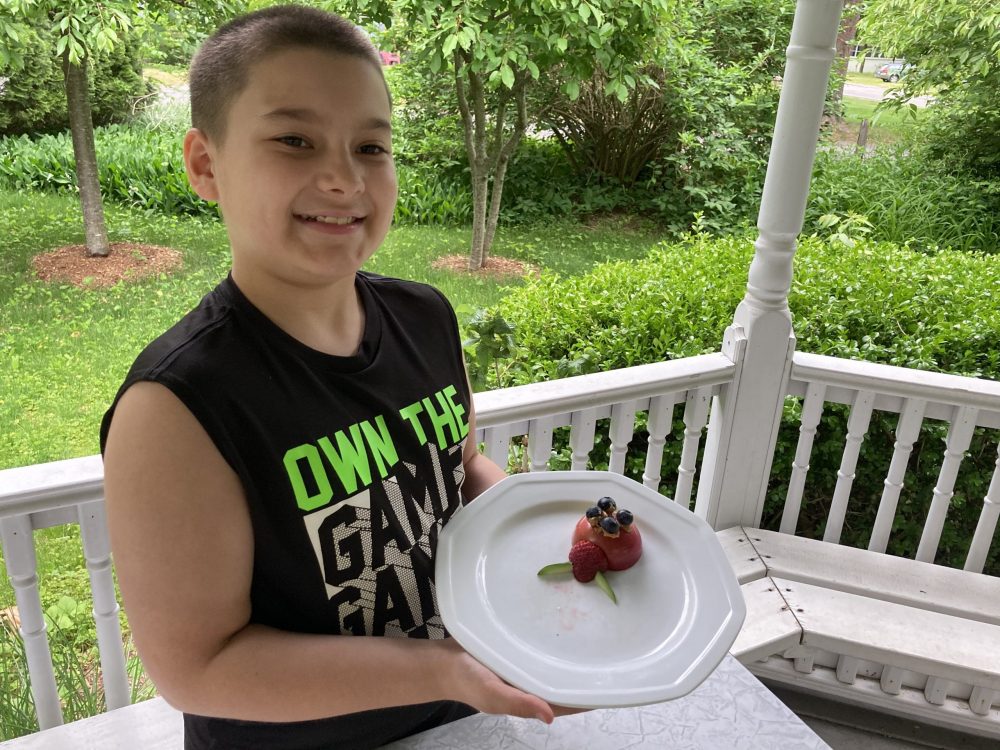 Note: In Pod Eleven, Grammy and Eli talk about Grammy’s work—including helping the Eric Carle Museum of Picture Book Art. They also talk about what Eli wants to be when he grows up, and Grammy reads two poems about ladybugs. Then, Grammy walks Eli through the process of making a healthy snack that looks like a ladybug! (Watch a video of Eli making his ladybug.)  Click here to start at the beginning of the Poem Pod series.

Grammy: Hi everyone, Eli and I are here, bringing you Poem Pods—fun poems for fun people. We are still smiling under our masks, and Eli is particularly happy. He is excited about our activity today!

Grammy: Don’t give it away!

Grammy: So, here’s more of the story of how I got started as a writer. I stopped working at the newspaper in 1998 so I could be home with Sally and Molly. I started my own business and named it Beetle Press. My work was still writing. I wrote articles for newspapers and for businesses. I got to write stories about the college I attended, Westfield State, and they were published in the college’s magazine that was mailed to its graduates. I also got to help with the newsletter that is sent out by the Eric Carle Museum of Picture Book Art. I still work with the museum and get to hear news about exhibits and talks and new children’s books by fun authors like Mo Willems. Eli, do you know Mo Willems?

Eli: Yes, I do, and I love his books, especially “Piggy and Gerald.”

Grammy: I love “Don’t Let the Pigeon Drive the Bus.”

Eli: I definitely want to open my own mechanic shop, so I can work on cars and stuff.

Grammy: Hmm, that’s cool. You don’t want to be a superhero?

Grammy: Argh! Well, I want to be a superhero! That could be my second job. I actually think you’d make a good lawyer, Eli.

Grammy: Because you are so good at arguing.

Eli: You’re very funny. Also, Mom’s told me this before.

Grammy: What insect do you picture when you hear my last name? Hint, they are all over my house. (Not real ones. Decorations.)

Grammy: Right! Today, our poems are about ladybugs!

Ladybug, Ladybug,
Hiding down there,
On that wide greenish leaf
Without ever a care.

Ladybug, ladybug,
I thought you were dotted,
But when I looked closer, I thought,
“Nope, you’re just spotted.”

Grammy: Do you think there’s a difference between dotted and spotted, Eli?

Grammy: I was just being silly, and I was going for a rhyme. The second poem is called:

One little ladybug,
Lying on a plate.
Another bigger bug,
Lying in wait.

Crunch, crunch. Swallow.
Little bug goes bye-bye.
For it was just an apple
In the bigger one’s eye.

Grammy: What do you suppose is the bug lying in wait?

Eli: Oh, a kid that’s going to eat the snack?

Eli: Guess what we are making today, everybody? The ladybug on the plate, and you can be the one, lying in wait to eat it when you are done!

Grammy: How to you want to do this, Eli? Should I read the directions, and you make the ladybug, or do you want to read, and I’ll make the bug snack?

Eli: You’re definitely going to read it because I want to make it!

Grammy: Ok, he wants to be the hands-on, chef, ladybugger. 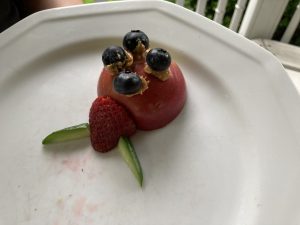 Grammy: Okay, we’re getting started now. Here’s what you need to make a ladybug snack:

And here are the steps:

Step one. Don’t peel the apple because the ladybug wants to have a nice, red coat, but do cut the apple in half. Whoops, there is Eli cutting his in half. Don’t cut your fingers.

Eli: And if you’re a little kid, get an adult to help you with this part. I’m old enough to do it by myself.

Grammy: Right. You need your grown-up. Now, remove the core by scooping it out with a spoon. You might want some help with that. Do you want some help?

Grammy: I’m just going to dig down, and scoop it out. And then it’s all done. Okay, now, place your half apple, skin-side up on a plate. This is your bug’s body.

Grammy: Eli, one apple makes how many bodies?

And now on to the next step.

Remove the green, leafy part of the strawberry, and cut off the very top part that no one likes to eat. Yup, and now, cut the berry in half. Place each half of the strawberry on top of each apple half. Ya, it looks like a hat, right? What do you suppose that is?

Eli: The ladybug’s head and butt.

Grammy: No. The ladybug has its butt on the apple. So, take off one. So, we’ve got half the strawberry on top, and what’s next?

Step three: Peel an inch-long section of cucumber, or if you’re using the kinds of cucumbers that we use—they’re very small and have a very thin skin; we don’t peel them. Cut it in half, and eat one half (yum, yum, yum, yum), and cut the other half into thin, vertical strips. Make sure it’s an inch long. Cut it in half the long way, and then cut four strips. You only need two for one bug. The reason you need two… why do you supposed you need just two?

Eli: For the antenna!

Grammy: Exactly. So, where would they go?

Eli: On the strawberry.

Grammy: So, put your cucumbers sticking out of your strawberry, and those are your bug’s antennas. Your bug is coming along quite cutely. (Watch a video of Eli making his ladybug.)

Grammy: Next, you take about four blueberries, dab a little bit of peanut butter on each one, and stick them on the apple to make the bug’s dots!  You can use raisins instead, but we are using blueberries because Eli doesn’t like raisins. And likewise, you can use celery for the antennas, but Eli doesn’t like celery, and he does like cucumbers.

Grammy: His bug is looking quite cute.

Eli: And you can put the blueberries wherever you want, except on the head.

Grammy: Exactly. You can imagine what your ladybug should look like. Eli’s has four dots right around the center, where that imaginary line would be.

So, step five is a fun step. You can admire your bug.

Step six is even more fun. Eat your bug. But before you eat yours, Eli, we’re going to finish our Poem Pod!

So, take a picture of your bug and post it on my blog or Facebook page. It would be super fun to see a picture of you eating your bug too, like the photos we have of Eli, making and eating his. Yes, please share. We want to see!

Eli and Grammy: That’s the end of the eleventh Poem Pod. Remember… We are smiling under our masks, and we hope you are too! It’s hard for Eli to talk, with apple in his mouth.