You are here: Home / All / Plugging Away at a Novel 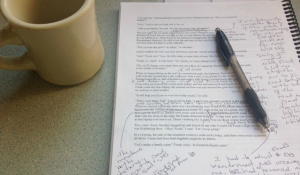 In February, my good friend Judy Kelliher and I had the chance to sneak away and write for an entire weekend.

We intended to be at a retreat center in the woods—on a lake in the Hilltowns in a most inspiring and peaceful setting—but a glitch with the center’s online registration system meant we were the second group to book the suite for the same dates, and so we were told there was no room at the inn.

We did what any adventuring writers would do: We booked a room at the Econolodge in Hadley. Not nearly as inspiring—located on Route 9 with a view of Barnes and Noble—but it served us well.

The Friday night of the retreat was Judy’s birthday. After we checked in, we each spent some time mapping out our weekend plan and the work we wanted to accomplish, and then we headed off to Amherst for a birthday dinner.

The rest of the weekend, we were deep in thought, making project progress. Judy worked on her book, a memoir about her brother Bobby’s two tours in Vietnam, fleshing out chapters. I worked on my fictional love story, with a current working title of Unleashing the Sun.

I didn’t plan to work on the book, though. My original intention was to write some blogs and work on a memoir I have in mind about traveling. But, a few days before the retreat, an intern asked me if she could take a look at Unleashing the Sun.

Before I sent it to her, I took a peek and was pleasantly surprised by my skim of the first chapter. I hadn’t looked at the manuscript since I worked on it on retreat in New Hampshire with Judy last May, and it was livelier and more developed than I remembered.

That’s when I decided to spend our retreat working on it.

I printed the manuscript out and had it spiral bound for ease in flipping pages. I was certain I’d like the first few chapters but imagined the bulk of my work as I read through the draft could easily be crossing out what was there and starting over.

I was pleasantly surprised, though.

As I dove in, I found I changed very little in the first three chapters and made more substantive edits in the remainder of the book—mostly in the form of notes to myself like, “Say more here. Set the scene better. Describe.”

I enjoyed discovering a few plot twists I’d forgotten about that made me happy. I laughed out loud a few times at passages, and I wept a few times too.

The work ahead now is building scenes, adding more layers of depth to characters, fine-tuning transitions between scenes, and making everything fit together! Thank you for continuing to listen to me talk about writing a book. Someday, it will be a tangible thing!

My next opportunity to do focused writing will be on my next writing retreat with Judy, the first weekend in June. Can’t wait. Neither can she. We will be in a bed in breakfast in Amherst that weekend. We are sure to do well in such a literary locale.