You are here: Home / All / On the Edge of the World 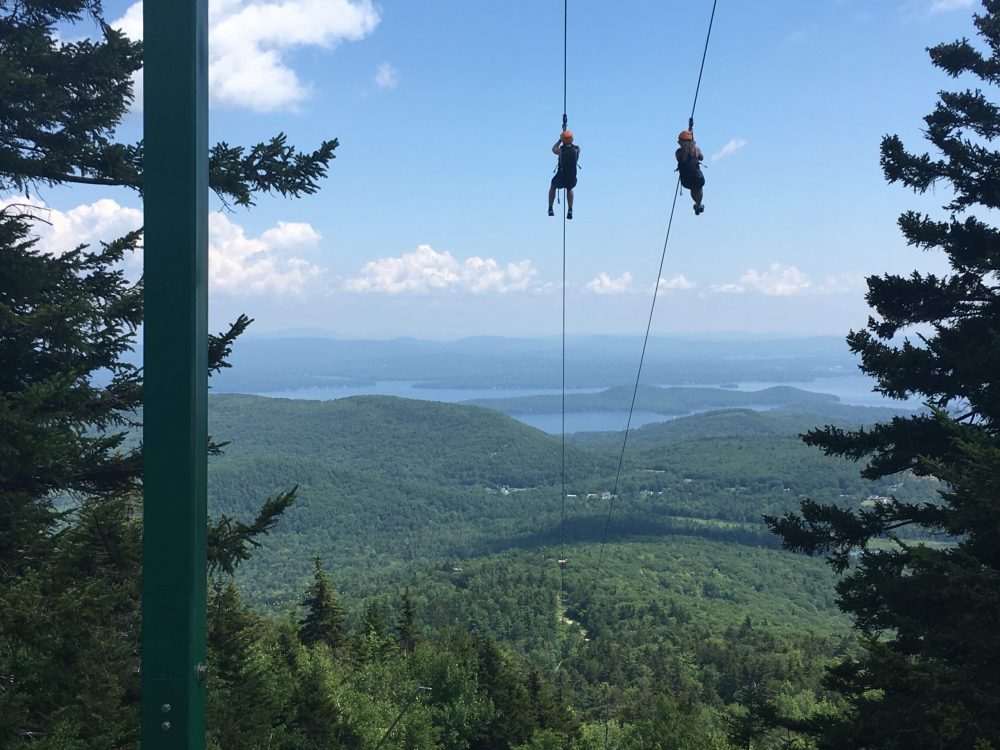 I’m going to take us into some adventure territory this week and next, given that it’s almost a new year, so it’s time for new adventure!

Last summer, I was asked to write a piece for The Laconia Sun in New Hampshire on the Adventure Park at Gunstock Mountain Resort in Gilford. I was pretty tickled because Gunstock has been a staple in my life for nearly a half century. I was a bit nervous too, since the Adventure Park includes a zip tour—a feature that terrified me.

As a teen in the late 1970s, I spent many days riding up on the chairlift and zooming down the alpine slide. I learned to ski at Gunstock. I’ve hiked on dozens of the mountain’s trails.

Not long after the zip tour became an offering in November 2011, I emerged from the woods onto the summit via the Orange Trail and spied people flying down the mountain on a cable.

“No way would I do that,” I told my hiking buddy as we watched people get clipped on and literally zip off. “Way too scary.”

I had also pronounced I would never do the Aerial Treetop Adventure Course at Gunstock either. Nope, no way. Too far off the ground. Too scary.

As I’ve gotten older, though, my taste for adventure has increased along with my willingness to have faith. I’m past my Year of Strength now, right? I’m even stronger! (Literally, I am—physically and mentally.) So, I took a big gulp and decided it was time to conquer that fear of heights thing.

My friend Mary and I signed on for Gunstock’s Premium Adventure, which allowed us to experience the zip line as well as the mountain coaster, aerial treetop adventure course, and the Discover Zone, which is packed with fun play things like bungee trampolines and a stunt jump.

We experimented with the mountain coaster first; it seemed safer! We each climbed into carts and ascended the mountain on a cable. It was peaceful and pretty. Once at the top, the cable releases your cart, and your speed becomes your call; you push your hand controls forward to accelerate, pulling back to slow or stop.

The ride was like a roller coaster through the woods and prepared us for the next challenge: the zip line. I was running with the mantra that had been suggested to us by friends: “Trust the equipment.”

Two guides helped our group of about 15 harness up. We were handed backpacks that held the pulley system and clips we would need to ride down; we all put them on our backs and walked in a clump toward the first two sets of practice zip lines.

“That was fun,” I exclaimed to Mary when we got off the second one.

As we walked to the chairlift, though, our fear level inched up from a two to a three. Guides had told us you can fly at speeds of up to 65 miles an hour on the zipline, and the course is over a mile long.

I thought about that little pulley, the skinny little cable as we boarded the chairlift to head up to the summit, but I held the mantra: “Trust the equipment.”

On the way up, my anxiety spiked to 25 when we caught sight of the dual cables running down the mountain to our left, hundreds of feet above the tree line. “Oh my God,” I said to Mary. “We’re coming down on those.”

The third zip line at the summit was not too daunting, though; you could see the platform where you would brake and land down below. Mary and I easily zipped off.

Climbing the metal spiral stairs for the fourth of five sets was where true panic set in. The sight of the cables—so far above the tops of the trees—disappearing all the way down the mountain into trees took our breath away. Mary repeated, “I don’t think I can do this.”

The thought that we might die passed through my mind as a clear and present possibility. I could no longer hear the trust refrain, only thoughts of survival. After we were clipped on the cable, I bounced nervously in my harness, testing the pulley.

“One, two, three, go,” the guides told us. Defying logic and our reasoning minds, we released our brakes and began to speed down.

The next five minutes passed in a blur of emotions; there was panic, as I spun backwards continuously as I flew down the mountain, shifting back to face forward only when I gently applied the brake, but there was also pride and joy and a sense of accomplishment and “Oh-my-God-look-at-me!”

After our feet were on solid ground, over and over, Mary and I said things to each other like, “I can’t believe we just did that,” and we laughed, and we trembled and hugged each other to prove we were still alive.

We were ready for an adult beverage after the last leg of the zip. But it was only about 1 p.m. on a hot, sunny day, and we had more adventure to tackle, so we settled for water instead. Then Mary watched as I did back flips—harnessed in—on a trampoline in the Discover Zone. And then we tackled the tree top adventure.

There are 91 activities on the treetop course—a combination of bridges, ropes, swinging obstacles, and mini ziplines that you navigate independently as you pass through the trees, ascending higher and higher as you make your way through five levels that gradually become more difficult.

A guide taught us how to clip ourselves on to the cables that traverse the obstacles in the trees and to use other equipment we would encounter on the courses. We learned that if you slip or fall, the clip and the cable hold you until you get your bearings and clamor back onto the obstacle that tripped you up.

We did a mini-course that was five feet off the ground and then headed into the first level on our own. Here, we were roughly 10 feet above the ground, in the trees, and I mostly loved every moment of it, except for walking across a series of about a dozen swinging wooden dowels; that sent shock waves of panic through my limbs.

I enjoyed the challenge of clipping myself in and managing the pulley on my own when I needed to zip between two trees. I liked figuring out how I would tackle each set of obstacles and forming a plan in my head. I felt like I was in the starter-kit version of American Ninja Warrior.

It took Mary and I about an hour to complete two levels of the treetop adventure. We had hiked the Lockes Hill Trail in the morning, before heading to Gunstock, not realizing what a physical day we were about to have. So, we were weary and emotionally drained, and the next three levels were too challenging for us to forge ahead. I imagined how easy it would be to forget to clip yourself in, and in the latter levels, you can fall from two-story heights.

We had met our own internal goals: We conquered our fear of heights and had oh so much fun in the process. What a great way to feel like a kid again, challenge yourself, go all-in.

Next week, I’ll tell you about my latest terrifying adventure. I’d like to hear how you are challenging your own self? What fears are you conquering?