You are here: Home / Adventures / Off on a Hawaiian Getaway 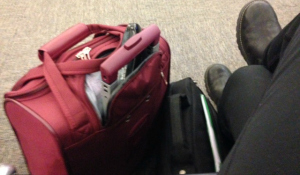 Note: This is the second of fourteen parts. Click here to read from the beginning.

In the days before my extended travel adventure to Majuro began last year, I admit to feeling a sense of terror. The island in the South Pacific was so far away and so small, and I was leaving for so long–a whole month. I had a lot of trouble believing it was all real, that I would actually find the capital of the Marshall Islands, that my daughter Molly would be there.

An island you can only see on Google Earth when you zoom in over 300 percent, Majuro seemed fictional to me, a fantasy island Molly had imagined. Even though Molly claimed to be living there, and even though I had seen her photos on Facebook, I was skeptical. I imagined circling over the South Pacific, running out of fuel, crashing and being lost at sea. I had nightmares.

I remember my last work out in my little home gym in the days before I left. I was weepy, thinking I’d never be in this room again, that I’d never see my home again. I sobbed saying goodbye to Eli, to Sally, my boyfriend as if for the last time.

Melodramatic, yes. But truly how I felt.

Even landing on Majuro, three days after leaving Bradley International, I could see only water. Where the hell is this going to land, all the passengers asked, not just me.

Then the wheels did touch the tarmac at an airport built on a half mile strip of land. And there was Molly, nonchalantly waiting for me in the rustic open-air lobby. I finally relaxed and got into the journey.

This year, as I packed and prepared, my head was telling me a different travel story. One with a happy ending.

That’s because I can clearly see Hawaii on a map. I know it exists . My mother and grandmother have been there. I have been there, on a layover in Honolulu last year! It was no sweat, traveling there.

And as last year, the promise of holding my younger daughter Molly drew me more than the warmth and balmy air.

I’m in an airport in Los Angeles as I write, on a seven-hour layover, and so far, the hardest part of my trip was packing. It took me two hours to plan and stuff books, snorkel gear, sports equipment and Christmas gifts into my suitcase and carry-on. After making dozens of painful decisions, eliminating items, I still had to remove seven pounds of belongings at Bradley at the ticket counter.

Good thing Poor Guy was there to help me.

I did shed a few tears saying goodbye to him. It has been terrific to be back in a relationship with him. We’re growing ever closer.

I’m working on a client’s book project on the plane, and here at the airport. I’ll be on Kona, with Molly, in about 10 hours!