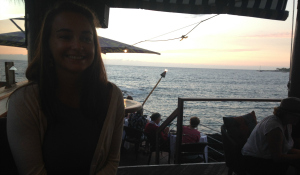 Note: This is the twelfth of fourteen parts. Click here to read from the beginning.

I felt sorry for Molly on New Year’s Eve. I wished there was someone her age who could stay up until midnight. I decided I’d have to take that on and be a good sport.

We went out to dinner to a place called Huggo’s in Kona, Hawaii, with a gift card from my friend Bonni that was a very thoughtful birthday present for me. The restaurant was on the water, and we started the night with a cocktail—a Fire Rock ale for me, and a ginger drink for Molly.

It was beautiful with the sun setting, and we chitchatted about what we might eat and what we might do after dinner. I was worried about staying up until midnight and was focused on pacing myself because I had to drive home.

We were sitting at an arrangement of wicker sofas and a coffee table that could seat about 10 people, and I asked the waitress if we should move to a table for two. “People will ask to join you when it gets busier,” she said.

About 8 p.m., Molly and I were gabbing away and on our second drinks. We had shared an order of tuna poke—a raw fish salad—and I had also had a cup of chowder. Along came a woman about my age with a young man.

“Can we sit here with you?” the woman asked, adding, “I am a single woman with an attractive son.”

“What a coincidence,” I said. “I’m a single woman with an attractive daughter!”

They sat, and I could see right away this woman Kathy and I were going to hit it off. Likewise, Molly and her son Colin were making a good new connection.

Over the course of the next few hours, we met a couple of Kathy’s friends who live on the island and their younger son, Todd, and we learned a bit about everyone’s history and occupations. Kathy and her friend are retired flight attendants with American Airlines and the friend’s husband is also in the industry.

As an airline retiree, Kathy has ample time and a pass to fly anywhere in the world affordably. So, at that point in time, she was spending a vacation at a friend’s house on Kona, and she said she travels all over the place year round to ski and vacation. In January, she was headed to places such as Utah ad California to hit the slopes. She has a home, but it’s more of a home base she checks in at.

Likewise, Todd is an engineer, and he moves to a new region every year or so, never really putting down roots.

These topics got us on my topic of “home.” Do they feel at home? Or do they feel like nomads? Nomads, they both said.

Kathy said even when she is home, she doesn’t really feel home, and I know what she means. Our kids are gone. We don’t have partners we live with, so there is something missing for us in our “homes.”

I know I have been searching for home since Ed died and my kids moved out. I know on Kona and, last year, on Majuro, the climate felt like home to me, but I didn’t exactly feel at home. So what is home? We couldn’t answer the question, but obviously it’s not something a person can get a grasp on while traveling about.

About 9:30 p.m., Kathy invited Molly and I up to her friend’s house just up the hill, in a traditional residential neighborhood. We sat around the pool, eating cheese and crackers and sipping wine. Molly had the company of two people in her age bracket, and I had the company of someone in mine.

What a perfect set up.

Kathy and I kept finding commonalities. We like to hike and ski and swim. We can’t sit still. We’re young at heart.

The time passed quickly, and we rang in the New Year together and watched fireworks down below in the city of Kona. We learned New Year’s fireworks displays are a big thing on Hawaii. All the neighbors were setting them off, and Todd and Colin lit a few as well.