You are here: Home / All / My Intern Dared Greatly in Italy 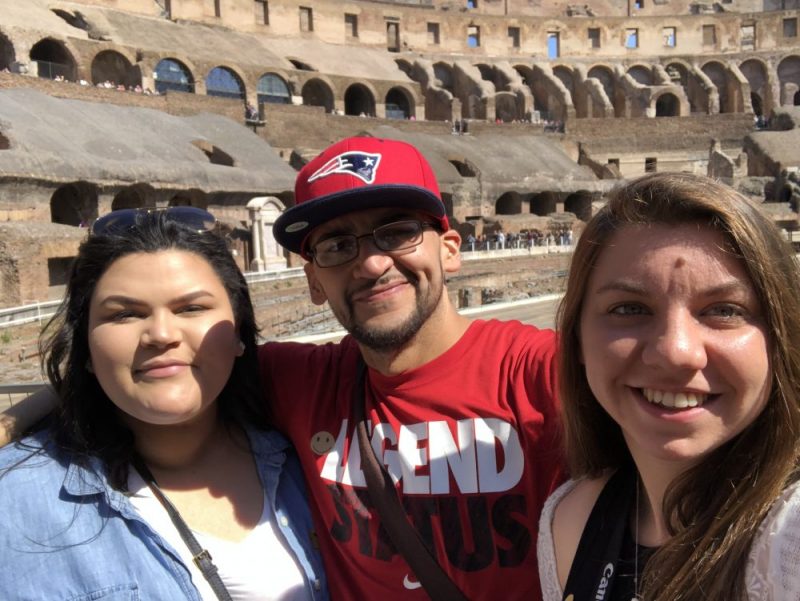 My spring intern, Aimee Funk, a Westfield State University student, went on a major adventure in March. I asked her to write a blog about the trip because, on it, she was daring greatly! I share her story with you today! (I think she did a great job.)

When I was in ninth grade, I had the chance to go to Italy with my freshman class. I remember very little about the trip, and most of what I recall consists of late nights with my friends in the hotel and teen gossip. I remember ordering a pistachio cannoli at a hole-in-the-wall bakery in broken Italian, and I was awed by the Colosseum. But other than that, it was just one long, expensive field trip.

I’ve always regretted focusing on my friends rather than on the experience, and, now that I’m 21, I wish I’d paid more attention to what I was really there for: the history, the art, and the culture.

Somehow, I was granted the opportunity to go back and try again. Jonathan, my boyfriend of almost a year, planned a vacation to Italy with his sister before we met, and he invited me to go with them in early February. At first, I was hesitant to say yes, not because of the expensive price tag on the last-minute ticket, but because I’d never traveled with a partner before. I didn’t know what to expect. Even though we live together, and I’ve spent plenty of time with his sister, Yelitza, I was unsure about the commitment.

I talked to him about my fears, and he admitted to sharing some of them. One day, he looked me in the eyes and promised he would always have my best interest in mind, even if something bad happened. His reassurance was all I needed, and I bought my ticket shortly after. It was going to be the perfect opportunity to see how Jonathan and I handled stressful situations as a couple, and it was a chance to test the strength of our relationship. Fortunately, we passed with flying colors.

We arrived in Rome on March 21. Our hotel was in the center of the city, and it was within walking distance of pretty much every landmark you could possibly want to see while there. On our first day, we walked to the Trevi fountain, the Roman Forum, and the Spanish Steps, all in one day. Jonathan and I visited the Colosseum at night and took pictures with the full moon in the background. We ate pasta and pizza and gelato at different restaurants every night. We took a speed train to a historical beach town called Anzio, where we ate croissants on an oversized blanket, and three local teenagers sold us a tiny bag of marijuana for 20 euro.

We saw an entire city of ruins called Ostia Antica, where dozens and dozens of stone structures stood like tombstones. We walked through the Vatican Museum, where we witnessed hundreds of pieces of art including Michelangelo’s famous Sistine Chapel ceiling. We took pictures of the mural on our phones, even though it was forbidden. We walked miles and miles every day. We took sketchy, overpriced taxis when our feet hurt. I spoke to a stranger in broken French. I absorbed as much of the culture as I could, even the sketchy parts.

The vacation was unbelievable. I experienced more beauty in one week than I thought possible. Rome itself is dirty, grimy, and overpopulated, but it was so full of life and energy that I knew I would miss it as soon as our plane took off. Navigating a new place and culture with Jonathan only brought us closer together, and I found myself trusting him even more deeply once we got home. I got to know Yelitza better, and I learned more about their family history. It was a bonding experience for all of us, and in a way, the vacation never really ended.

It amazes me that I ever considered saying no to an invitation to Rome with two of my favorite people. At the time, I didn’t recognize that my hesitation was really about fear. I was afraid of the unknown, and I preferred to stay home, rather than fail at something with my partner. My comfort with the status quo of our daily lives made the unknown look much less appealing, but if I hadn’t agreed to go, I never would have found my ability to trust Jonathan so deeply. I wouldn’t have learned so much about myself and/or about the great big world that exists right outside of my own. The trip was a risk worth taking, and I’m so grateful for going for it.