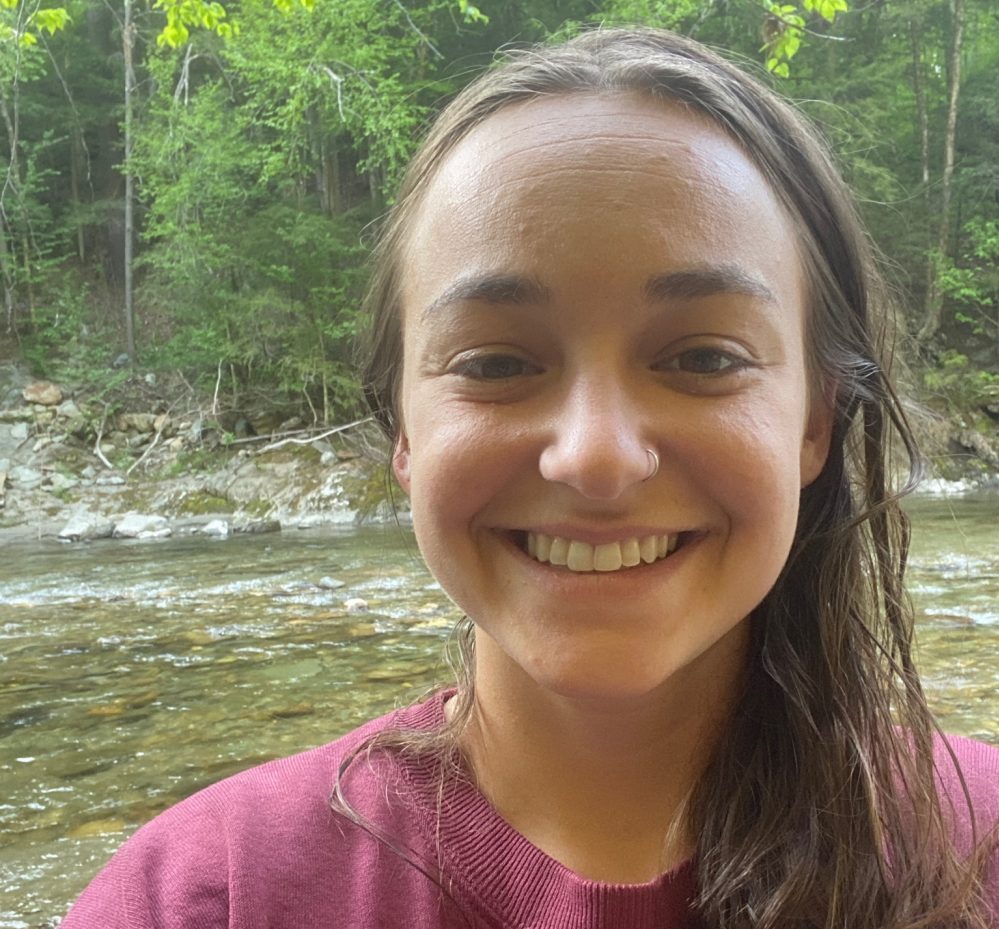 Note: In Pod Four, Grammy talks about the typewriter her grandmother gave her that was an inspiration and reads two poems about imaginary things. We interview Eli’s Auntie Molly, a preschool teacher, who talks about children reading and writing and why it’s important. We also talk about inspiration. What inspires you? Click here to start at the beginning of the Poem Pod series.

Grammy: Hi, Eli and I are here, bringing you Poem Pods—fun poems for fun people. We are outside in the shade, social distancing, and we are smiling under our masks. Eli, how are you today?

Grammy: Eli, when I was twelve, Ma—the same grandmother who gave me the notebook with the kitten on the cover—gave me her typewriter. Do you know what a typewriter is?

Eli: Yeah, I do know what a typewriter is.

Eli: It kind of looks like the base of a computer but it’s really big, and it holds a piece of paper in it, and when you get to the end of a line, you have to push it back to start the new line, and the keys go clack, clack, clack, clack. It’s really loud.

Grammy: And when you push the thing, the return, it’s called, it goes “ding,” and you start a new line. Yeah, so it was like that. A big and clunky thing. But back then, having my own typewriter was as exciting as it might be for you to have an iPad or a tablet now. I wrote all kinds of things on my typewriter. I made up stories, little poems, and I wrote letters to friends. I also typed my papers for school. I remember I wrote a story about a playing card that fell into a heat duct. The wax melted off, and the card came to life. Have you written any stories you’ve liked lately?

Eli: Uh, no. I haven’t written any stories because I don’t really like to write, but I have written the story about Oscar, and I liked that one.

Grammy: Right? You wrote a poem about Oscar.

Grammy: Stories that are made up are imagined. Science fiction is something about the future, or technology. The point is, I didn’t just write poems about my friends and my family. I wrote poems about what I was imagining—like the playing card, melting. Today’s poems are poems I wrote for Sally and Molly about things we don’t usually see. We just imagine them.

The first one is called:

Once there was a fairy.
She flew above my head.
I grabbed her,
Gently,
By one blue wing.
Then, I tucked her in my bed.

The other poem for today is about Santa Claus, who we never see, right? We just have to imagine him.

Santa is a jolly elf.
He climbed into my house.
He left me treats and toys.
He took the sleeping mouse.

Grammy: Did I ever tell you about the time I saw the Easter Bunny?

Eli: No, actually you didn’t.

Grammy: Well, I was at my aunt’s house, and I got up in the middle of the night to go to the bathroom. I looked down the hall and saw his big giant ears sticking up, and I hid in the shower because I was afraid the Easter Bunny wouldn’t leave me any candy if he noticed that I saw him.

Eli: Did he leave you anything?

Eli: Hey, I think a good activity for today would be to write a story about something from your imagination. Close your eyes and dream up an animal or a creature in your mind. What does it look like? What does it do? Write that down.

Eli: If you want to try to make this story a poem, write down some words that describe your creature. You could use words like:

Then think of words that rhyme with those qualities:

There was a creature,
In my yard.
It was big and scary.

It danced a jig.
It was a pig.
And it was rather hairy.

Grammy: Good one, Eli. Thanks for that. This is the part in our program where we like to invite a guest on. Today’s guest is my daughter Molly, and Eli’s Auntie, and she’s a teacher. Eli is going to interview Molly about being a teacher and about inspiration. So, let’s ring her up, shall we Eli?

Eli: Hi Auntie. How are you today?

Auntie Molly: I’m doing really well, Eli. I’m sitting outside by the river in the sunshine. No complaints, except that I miss you guys?

Grammy: Where are you? Are you in Vermont?

Auntie Molly: I am in Vermont. On the Huntington River.

Grammy: So, we said you’re a teacher, now Eli’s going to ask you…

Eli: How old are the children in your classroom?

Eli: Do they every write stories and poems?

Auntie Molly: No, these children are learning how to write their names and all the different letters in the alphabet, but I have taught first and second grade before, and those children love to write poems.

Grammy: Why do you think that’s important, Auntie, for children to learn how to read and write?

Auntie Molly: I think it’s important because it helps them develop skills that they’re going to need later on in life. It helps them be creative and imaginative and just figure out a new perspective on the world.

Eli: What do you think inspires young children to read and write?

Auntie Molly: I think a lot of it comes from the older people around them. If they see their parents reading and writing, they want to be just like them. A lot of their stories come from things they’ve experienced, or they come from their imagination.

Eli: Well, thanks for coming on the Poem Pod show with Grammy and me!

Auntie Molly: Thanks for having me. It was nice to talk to you two.

Grammy: Yeah, it was nice to talk to you. We miss you.

Eli: We miss you!

Auntie Molly: I miss you guys too.

Grammy: Yeah. We want to sit on the river with you. Alright, we’re going to say goodbye.

Grammy: Eli, I’m going to suggest that today’s activity for kids also be to think about what inspires them. Kids, what inspires you?

Eli: Grammy, give them an example. Name something that has inspired you?

Grammy: That’s a good idea, Eli, because inspiration might be hard to explain. Well, Auntie and Mommy inspired me when they were little just by being cute and saying cute things, and that’s what inspired me to write poems about them and about other things in our world—and things they did and said. And then, more recently, when I thought about creating these Poem Pods, and I was inspired to do that, I got inspired to make it an even bigger thing, where we’re having interesting conversations with different people, and we’re learning different things from different people, and we’re—maybe inspiring people. I’d like to think that we are an inspiration.

Eli and Grammy: Well, that’s the end of the fourth Poem Pod. Remember… We are smiling under our masks, and we hope you are too!