You are here: Home / Adventures / Mocking the Token Narcissist 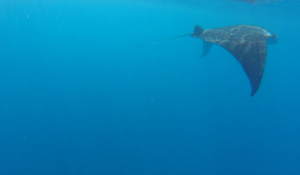 Note: This is the thirteenth of fourteen parts. Click here to read from the beginning.

And then there was the narcissist.

I’ll tell you about him, because every good story needs a narcissist, but let it be known that Molly thinks this blog could be unfair. I, however, believe in mockery, when mockery is due.

We met this fellow while drinking a few Fire Rock beers and watching the sun set at a harbor in Kona, Hawaii, where several competing dive shops were located. Three tour leaders from these shops were standing around, waiting for passengers to arrive for their nighttime manta ray cruises. Molly and I were considering going on such an outing, so I asked one 30-ish-looking guy if he wanted to sell us on his particular tour.

I didn’t know yet what he really loved was himself.

I asked The Narcissist how the manta ray trip worked. He pointed to a surfboard with a strand of lights mounted to it and explained that folks don snorkels and masks, get in the water and hang on to the board. The light attracts the manta rays, and you view them through the mask.

“Yes it is,” he said smugly, and with annoyance. “You’re wearing a mask and snorkel. It’s snorkeling.”

I couldn’t let it go. “That’s not exactly snorkeling,” I said.

“I guess you just don’t know water sports,” he fired at me. It was the wrong thing to say to me—so antagonistic—but because I’m one of those people who thinks of a good comeback a week later, I am appalled to say my response was to stick my tongue out at The Narcissist.

Then I said, “I grew up on a lake and learned to snorkel when I was six. I know how to waterski, and I own a boat. I know water sports, and, to me, snorkeling is an independent sport in which one swims freely in search of fish and other wildlife. It is not holding onto a surfboard with a dozen other people with your head in the water.”

He shrugged, walked away. Ten minutes later, The Narcissist circled back to us at our perch on a picnic table. He asked if we wanted to go on his trip.

“You didn’t want us aboard five minutes ago,” I reminded him. He said a few people had just canceled, offered us seats at half price. We were not prepared for an outing that night and declined.

The Narcissist continued to talk. He told us he leads dozens of different adventure tours—kayaking, camping, biking, swimming with dolphins. You name it. He does it. He told us he’s a great diver. He even showed us several videos of himself, free diving down at 130 feet, without a tank. He let each video run in full. He pointed to himself, as if we couldn’t see him.

We told him his trips sounded cool. He told us we wouldn’t be afford them. I giggled inside my head. He was too much.

The Narcissist offered us half price seats on that night’s outing a few more times, and we continued to decline. What we had learned was that, if we went on such a trip, we wanted a more humble guide.

Turns out we saw a manta ray on our own on an actual snorkeling outing we led ourselves.