You are here: Home / All / Meeting Roxie 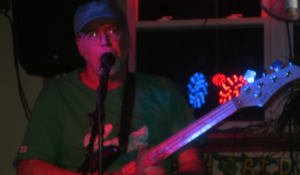 I met the main character in my love story last Friday night at the VFW in Florence. Or some might say, I accosted her.

Earlier that week, my intern Shannon Grossman completed her review of the manuscript, Unleashing the Sun. (You will hear more about this soon.) One piece of feedback Shannon had for me is that she couldn’t quite picture Roxie Rogers, the main character. I had to admit, Roxie was not all that clear in my mind either.

So, I started thinking more about Roxie. What exactly did she look like? Were her teeth straight? Any gaps? What was the exact color and length of her hair? I had a vague notion of it all, but nothing clearly defined.

Friday night, I went out to see my friend Mike Hooker of Kiss Me Florence at the VFW with my friend Becky and Mike’s wife, Jeanne. Sometime around 8 p.m., in walked Roxie through the front door, and I recognized her immediately.

She was a brunette with shoulder length, wavy hair pulled back in an 80s-like hairband. (I was also instantly aware that Roxie has a collection of such hairbands.) The stand-in Roxie had round dangling earrings, brown eyes, and full, flushed cheeks. What caught my attention, though, were her bright eyes and exuberance.

This Roxie person took to the dance floor with some friends of hers right in front of me.

“She looks like my main character,” I whispered to Becky, because the band’s volume was just right that night, and one could actually whisper in an ear and be heard. “I’m going to take her picture so I can describe her.”

But this Roxie stand-in was so full of life and energy—just like my Roxie—that all my attempts resulted in shots of the back of her head. When the song ended, my Roxie moved again to the back of the room.

“That’s so frustrating!” I said to Becky.

“Go tell her who you are and what you’re doing and ask her if you can take a picture,” Becky said.

So I did. I explained to this stranger in the hairband that I’m a writer working on a love story, and that she looks just like my protagonist, who I have been having trouble describing with any clarity. I asked if I could take her photo.

“Who are you again?” I gave her my business card, and explained a second time.

“Will I see my photo on the Internet or some other weird place?” she asked me.

I said no. (So that’s why the photo you see here is not her; it’s Mike, talking up his audience.)

“OK then, sure,” she said. I snapped a quick photo and now can’t wait to go back in the manuscript and weave in Roxie’s look and her affection for hairbands. Shannon had other feedback I am excited to tackle as well. I will go through the book and add this kind of depth when Judy Kelliher and I go on a writing retreat in New Hampshire the first weekend in April.

Before I left that night, I said goodbye to my new friend, and I told her the character’s name is “Roxie.”

I will never be able to look at her photo and think “Sue.” And that is a good thing!