You are here: Home / Adventures / Marshallese Children: The Heart of the Island 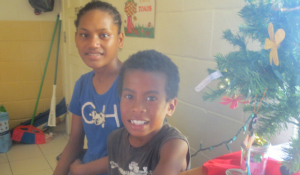 Note: This is the fourth of fifteen parts. Click here to read from the beginning.

Without doubt, the children are what brings Majuro to life for me.

There are so many of them, and because their homes are small and cramped, they tend to be outside in easy view. Molly tells me—because she knows from having 27 children in her classroom—that many of them live in one-room homes with over a half dozen other people. They don’t get to sleep until late at night, when the adults have finally gone to bed, and some of them even sleep outdoors.

They don’t eat well. They don’t have proper hygiene, and their options for the future are limited. Still, these Marshallese kids are always laughing and playing, full of hope and promise and affection.

On my first walk through the campus of the cooperative school, as I headed out the back to cut through the yard of one of the caretakers, five smiling faces beamed at me. They were children ranging in age from 2ish to 10ish. They were bare-footed, dusty, and they all closed in to hug me or wrap themselves around my legs.

Molly told me to get used to this type of greeting, and I was happy to do so! Because none of them speak English—either at all or very well—I wasn’t quite sure how to connect to them, though. But Molly taught me how.

On my second afternoon, after having been away from my apartment—the only place on the island where I have wifi—I was outside trying to get a good signal on my iPhone so I could check several days worth of email. A clump of four young girls came to say hello, but of course, they don’t speak English so they didn’t actually say hello. They came and smiled at me and giggled.

They were fascinated with my phone and tried to peer over my shoulder. I showed them my screen. “It’s just email,” I said, then, feeling silly, added, “You probably don’t know what email is.”

I asked them their names, and this they understood. They weren’t able to tell me how old they were, though.

One appeared to be the spokesperson. Her name was Thi-thi. She asked me if I was Molly’s mom, and I said I was. They all continued to stare and smile and giggle at me, and I literally did not know how to connect.

“In her apartment.” I walked them next door, opened the door and pointed inside. They all waved and smiled at Molly, who grabbed four colored pencils from her bookshelf and handed one to each of the girls; then she gave them a pad of paper to share.

Giddy with delight, the girls sped off.

Five minutes later, there was a knock on Molly’s apartment door. Thi-thi showed Molly a drawing. Then skittered off. Ten minutes later, another knock. When Molly opened the door, Thi-thi said, “Green.” Molly handed her a green pencil, and off she went.

There is one Marshallese child who is special to Molly. His name is Rueben, and he is a third grader in Molly’s friend’s class. She knows he has an especially difficult home life and has taken him under her wing. Several children are becoming special to me: Thi-thi, of course, and an older girl, Charlotte, who is 14 and attends a different island school. She is bright and friendly and very level-headed.

On Christmas Eve, Molly filled stockings for these children, and we bought them the game of Sorry. On Christmas Day, when they came knocking, we welcomed them in and taught them how to play the board game. It was so fun to see them catching on to the rules and laughing as they would knock each other off the board and back to “Start.” I can’t imagine 14-year-old American children enjoying this kind of experience as the Marshallese children did.

In the early evening, Molly and I shared our chicken dinner with Charlotte and Rueben, and other adult friends of Molly’s came to visit. We played more games of Sorry, and Charlotte taught Molly’s friend how to play a game called Take Two. (We think her rules were not exactly consistent!)

Let’s just say I am getting attached. It will be hard to leave these little guys. Molly and I have even started thinking about a Kickstarter campaign to bring Charlotte and Rueben home for the summer.

Possible or another of my fantasy ideas? Who knows, but I love the idea of Rueben playing with my grandson Eli. They each have much they could teach the other.