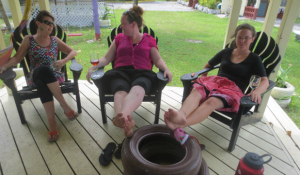 Note: This is the third of fifteen parts. Click here to read from the beginning.

Majuro is home to about 30,000 people, mostly Mashallese, but also Americans, Australians, New Zealanders, Portuguese, Brits, Asians, Pilipinos, Germans—people truly from all around the world who are here on some sort of mission.

There are volunteers, teachers (like Molly), fishermen, and there are electricians, carpenters and engineers working on expansion projects.

I feel extraordinarily lucky to have met many of these visitors. Below is a sampling of some of the folks I now know thanks to Molly, who has met them all at restaurants in town, or on the island of Eneko. (Bear in mind this isn’t a journalistic report, so I am not swearing to the accuracy of the information, picked up at social gatherings and on the beach.)

At a gathering on Christmas Day with the man from New Zealand who works for the power company, his girlfriend, the engineer and some of Molly’s teacher friends, I learned about the many ongoing infrastructure projects here.

It surprised me to learn that there are many dollars being invested in Majuro because, several weeks before I arrived, there was a story on the front page of the New York Times out of Paris, during the global climate summit, that outlined how Majuro is slipping in to the sea and is expected to be nonexistent in 30 years.

When I mentioned this at our Christmas party, the fellow working for the electric company said no one was ready to give up on the island. “They will keep improving it and living as if it is not going anywhere,” he said.

It fascinates me that in less than a week I have met all of these interesting people, each of them with stories that keep me entertained and asking questions.

The people who have given me the most joy so far, though, are definitely the children.