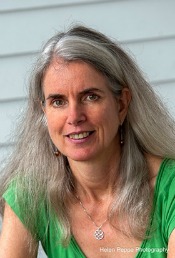 Note: This is the fourth of seven parts in a series of blogs on authors living in the Pioneer Valley. Click here to read from the beginning.

Suzanne Strempek Shea says her idea of a hectic commute is walking down a hallway to her office, her office being a sunroom in the winter and her back patio from May to October.

It is on this turf that she spends the majority of her days, gleaning inspiration from the ambient setting. Suzanne, 56, a full-time writer from Bondsville, Massachusetts, has been lucky enough to carve out a career that allows her to focus entirely on her craft.

Journalism is Suzanne’s base; her writing career starting at the young age of 9, when she created a newspaper for her parents. This then spurred her on to write for newspapers once she reached high school.

She is extremely ambitious, saying that her career really took off when she realized her town paper wasn’t covering her high school’s hockey team. This frustrated her, so she went to the editor to complain, and he claimed that the paper had no one to send to the games. He told her, “If you go to the games, why don’t you write the stories?” Rather than be put off by this, Suzanne did just that, and the rest is history.

As a full-time writer, Suzanne’s reporting days are behind her, yet nonfiction is still an ever-present part of her career. She has written three memoirs, titled Songs From a Lead-Lined Room, Shelf Life and Sundays in America. She is also the author of six fiction novels titled Hoopi Shoopi Donna, Selling the Light of Heaven, Lily of the Valley, Becoming Finola, Around Again and Make a Wish But Not for Money.

Make a Wish But Not for Money, Suzanne’s newest novel, follows Rosie’s accidental career change to palm reader at a failing mall, which opens up a world to her that she never knew existed, leading her to reassess her own future while exploring the futures of others.

As far as upcoming appearances, Suzanne will be traveling quite a bit locally this coming spring and right into the summer months. She will be doing a book signing and reading from Make a Wish But Not for Money at the Peabody Institute Library on June 4. She is also co-hosting the annual “Are You a Bookie?” reader day at Bay Path University on June 14, so if you’re interested in checking out her work or meeting her in person for a quick chat these dates are a great opportunity!