You are here: Home / All / Local Author Series: Marian Kent 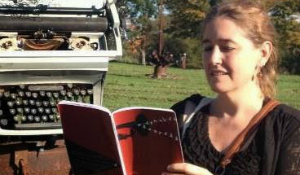 Note: This is the third of seven parts in a series of blogs on authors living in the Pioneer Valley. Click here to read from the beginning.

Marian Kent, a 48-year-old grant writer and successful Easthampton poet, says “if I say I’m going to do something, I’m going to do it.” This affirmation is evident throughout Marian’s work, and she continues to compete with herself each day.

Marian is a mogul in her own right. She has created her own publishing company, or empire as she refers to it, called ALL CAPS Publishing, in which she is the founder and editor, and through which not only she publishes her own books but also publishes other authors’ works. This company was designed intentionally in order to ensure that her books never appear self-published, which is very important to Marian; the books are extremely professional, the covers are designed by a local musician and graphic designer named Max Germer, and she assured that the level of detail and attention that goes into each book is such that they reflect this effort.

Her newest book, SUPERPOWERS or: More Poems About Flying, achieves this goal. The cover art represents a retro comic book, right down to the cellophane packaging. It is creatively divided into sections by superpowers such as invisibility and immortality, and the poems are selected that way, respectively. Marian says this is a fun way of organizing. Her first book, Responsive Pleading, has a similar organizational theme, based on the seasons in this case. She says she latches onto a concept of why she would want to collect something and bases her books around this focus. Her next idea for an upcoming collection will be based upon a journal of her grandmother’s poetry combined with her own writing, but still needs to further conceptualize and iron out the details.

Poetry is Marian’s main genre, yet she has dabbled in short fiction as well, but feels that this is harder. She even wrote a 50,000 word novel in 30 days a few years ago, participating in National Novel Writing Month (NaNoWriMo) in November. She has not published this, but would like to revisit it, and also wishes to branch out further from poetry at some point in her writing career.

Blogging spurred her writing practice; she built a strong readership this way. It quickly awoke the creative writing aspect within her and she was able to connect with writing communities, such as the Imaginary Garden with Real Toads. This is comprised of a group of poets that create writing prompts and provide support. This allowed her to build a strong online presence and following, and has now spread this to various social outlets such as Facebook and Twitter.

Locally Marian is part of the Florence Poets Society and frequently participates in local fundraisers such as Northampton’s Center for New Americans November event where she writes 30 poems in 30 days. She has also been doing many local readings and you can check out her scheduled events here if you’d like to check one out!

How she finds the time to write is her number one challenge, but she is a very productive writer and her way of writing is observational. She always carries a notebook and jots down notes as they filter in, saying that “there is no shortage of things to notice.”

In Springfield Marian works as a grant writer full time for HAPHousing, a nonprofit that focuses on affordable housing and homelessness in the community. It is predominantly a fundraising position, seeking out resources and development for the individuals she works with. This is a fairly new position to her, and she says that this work finally gives her the opportunity to merge the two processes. Marian feels that writing is a practice, and while poetry and grant writing are two very different skills, to have writing be the focal point of both careers feels like the right fit for her.

Marian has had the opportunity to have some of her poetry published in local journals, but spends less time focused on submitting her work in this arena, feeling that she would prefer to spend her time writing and promoting herself. She says that we are lucky to be in a moment in time when publishing is really changing; self-publishing has changed from even just a few years ago. She feels that what she has been doing is working and what she has been able to accomplish is a huge success.

If there is more you’d like to know, it can all be found on Marian’s personal website here. There are constantly new poems on the site, so if you want to get a glimpse of how great Marian’s work is, go check it out!