You are here: Home / All / Local Author Series: John Sheirer 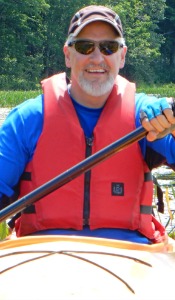 Note: This is the second of seven parts in a series of blogs on authors living in the Pioneer Valley. Click here to read from the beginning.

John Sheirer is an episodic writer.

The 53-year-old local Northampton author works full time as a professor at Asnuntuck Community College in Enfield, Connecticut, and he writes creatively on the side. “I have two careers, one that pays reasonably well and one that doesn’t,” he says. “But both are about making the world a better place, and I’m happy with that.”

Like many writers, it’s difficult for John to find the time to write creatively. He said he is always preparing for school, and the key thing for him is to grab small pieces of time as they arise.

John writes a monthly column for the Daily Hampshire Gazette, and in order to organize for this he will grab 15 minutes here and there to gather his thoughts until it finally comes together, similar to his own personal writing. He referred to this as episodic writing—brief but intense periods of writing in which he gets an abundance done in a short time frame.

His main genre isn’t definitive, however, he does work a great deal in memoir writing. One of his works, called Loop Year, is an ecological memoir. This book focuses on John’s experiences in hiking the same trail for an entire year, and he describes it as an environmental and anthropological study, as it focuses on the current events and people he came into contact with during that year in that specific region.

The column he writes for the Gazette is political in nature and deals primarily with current events, and he also has published a book, called Tales of a Real American Liberal, which is political as well. His most recent endeavor has been children’s books featuring his dog Libby, titled Libby Speaks and I Like Sticks! John says that everything he writes comes out of his own life; it is a way for him to connect with what comes from outside of himself.

John has been publishing since he had a poem appear in a literary magazine in college. He used to rewrite obsessively, and felt that everything he wrote needed to be literary or scholarly to be considered worthy of reading. Now as a more mature writer, he says that it wasn’t until he finally gave himself permission to make mistakes as a writer that he was able to publish his books.

Once he let go of the need for perfection he finally saw the greatness in his work. He now starts hundreds of projects and finishes five, and says he now comes up with his best stuff that before he would have disregarded.

He feels that his writing career is more of a hobby; he sells a few books here and there, making enough yearly to cover one mortgage payment, and he works with small publishers, so it is an intimate experience. His goal is not to get rich but to connect with people, including his students. He teaches children’s literature and all levels of college writing, and feels that writing makes him a better teacher. By having lived the craft, he can more artfully model the experience in a skilled way to his students and connect with them on a deeper level.

John grew up in Central Pennsylvania, in Bedford County, on a farm. He elaborates on this experience in his book Growing Up Mostly Normal in the Middle of Nowhere: A Memoir. He moved to Northampton, Massachusetts, in 1989.

He has been teaching full time at Asnuntuck Community College for the last 22 years; it has been “the career job he was looking for.” John teaches a vast array of courses, from literature, writing and English offerings to communications courses. He has also held administrative positions at the college but prefers to be in the classroom.

Given the ability to write full time, he would jump at the chance, but he would also still teach part time because teaching is a great passion for him as well.

All of John’s books are available on his personal website here, and are all definitely worth the read. He is also available on Facebook, so check him out!