You are here: Home / All / Larceny in the Aisles is Hot Off the Press! 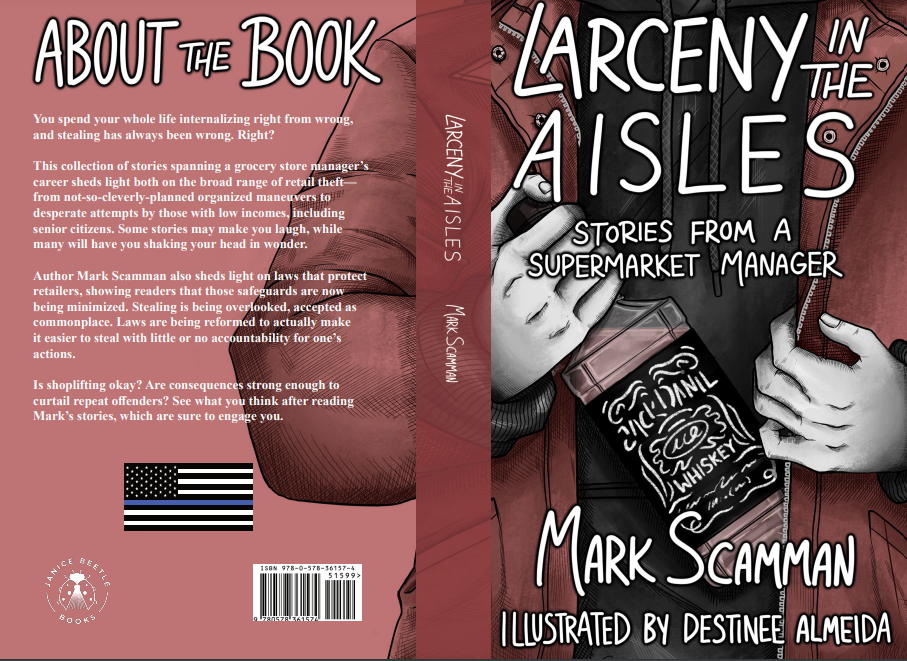 Mark Scamman worked in the supermarket industry for one chain store for over four decades, and now he is an author! His book, Larceny in the Aisles: Stories from a Supermarket Manager, is now available for purchase. And I highly recommend it. It’s great reading, both interesting and informative as well as entertaining.

Mark’s book highlights dozens of stories that shed light on the broad range of retail theft.

For much of his career, Mark served as store manager, working in 13 stores in two states and witnessing hundreds of instances of shoplifting. He saw people fill whole shopping carts with meat and then run from the store without paying.

He saw people shoplift one ingredient they couldn’t afford for a special holiday meal.

He saw parents teaching their children how to steal.

Larceny in the Aisles tells all these stories and offers perspective on the laws governing retail theft and how they have changed over time.

Over the years, Mark told his friends and family his ample shoplifting stories. Some made them laugh, some made them cry, and some just made them angry. Friends told him he should write a book, so he started to document the tales, thinking someday he might compile them.

For Christmas 2020, Mark got a Chromebook laptop—much better than pencil and paper. Retired by this time, he started telling his stories.

A year and a half later, my intern at the time, Jillian Tully, connected Mark to me as he was interested in self-publishing. Jillian had worked for Mark at one of the supermarket locations he managed.

I’ve been working with Mark on his manuscript since, and we are both excited and relieved that the book is live and available.

After working for one employer for forty-five years, Mark is loyal to the supermarket chain he worked for for 45 years, and he empathizes with all retailers.

Because he saw his supermarket suffer losses so many times without recouping the cost of many thefts, Mark also wanted to educate readers on the laws that protect retailers. He shows how those safeguards have been diminished in recent years, and he calls for reform.

Mark is also sympathetic toward law enforcement. For so many years, local police officers came to Mark’s aid in one incident after another. He respects the police so much he features the Thin Blue Line flag on the back jacket of his book.

Not a writer by trade, Mark has worked diligently at writing Larceny in the Aisles, and he hung tough in the arduous content and copy editing process he engaged in with me. He hopes that people will be entertained by his book, but more so, he hopes to inspire people to be aware of retail losses and advocate for retailers.

Mark learned how to spot shoplifters from the best, and he and his team managed to catch nearly a thousand shoplifters. He was named Store Manager of the Year in 1999 by the New Hampshire Grocers Association. One store he managed was named Best Store three years in a row by Best of Central Massachusetts, a survey put on by The Worcester Telegram and Gazette yearly.

Mark now lives on the Cape, where he runs a bed and breakfast with his wife. He enjoys running the busy inn as well as woodworking and playing golf with his fellow retirees. He can be reached at markscamman1@gmail.com.

Larceny in the Aisles in the aisles is illustrated by Destinee Almeida. Read about her here.