You are here: Home / All / Keeping the Conversations Going 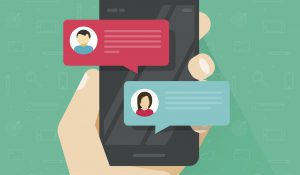 Note: This is the fifth of eleven parts. Click here to read from the beginning.

In the evenings, it was uncanny that Jacques and Troy would text me within minutes of the other.

With Troy, we tended to talk about his travels, World War II, my children. He kept his own personal stuff close to the chest, talking little about the people in his life. I knew that he was divorced and had no children.

Jacques, on the other hand, was an open book and would often tell me to ask him whatever I wanted. “I’ll always give you an honest answer,” he’d say, adding, “But you might not like it.”

I was often afraid I might call Troy “Jacques” or Jacques “Troy” or drop one a reference that was meant for the other. But I was having good, safe fun.

Hearing my phone ping like a piano for hours on end, and hearing me laugh at the individual bantering, as I lay on the couch and Craig sat in his chair, Craig would ask, “Who are you texting with so much?”

“Talk to them when you meet them.”

Troy became known in my circles as The Emperor, because that’s what I’d dubbed him, given he owned property in Connecticut and Vegas. I called him My Lord. He called me My Lady.

Jacques was known as the Air Traffic Guy. I talked with friends about our ongoing conversations as each man held promise for different reasons—Troy’s far more elusive. I was fixated on hiking in the dessert with him and couldn’t let go of the green Jeep thing.

Jacques was far more personal and forthcoming in his communications than Troy, and we seemed to have an awful lot in common. He peppered me with questions, such as these, early on: What’s your favorite color? (Maroon. His too.) Name a pet peeve. (Being kept waiting. Him too.) Are you organized? (Totally OCD. Him too.)

Jacques confessed to having a sneaker collection. Told me he loves traveling, having traveled much as a child in a military family. He’d often send long, overshare emails: “Doing my laundry. Going to the grocery store. Vacuuming.” Or, if he was at the gym, he’d be apt to tell me: “It’s leg day.”

When I offered Jacques a double entendre, he’d fire back with something clever and humorous. When I told him I’d left my first marriage by running away with the carpenter, who later died, he said he was glad I’d followed my heart and offered appropriate, well-spoken condolences.

I found it all incredibly appealing. He was solid, strong, could keep up with me in the humor department, and also had deep emotional intuition.

I liked that often, at bedtime, Jacques would text and tell me, “Bonsoir.”