You are here: Home / All / Craft ranges from Journalism to Children’s Books 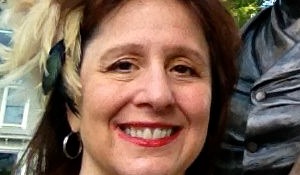 When Joan Axelrod-Contrada was young, she was one of the children who cheered instead of groaned when doing grammar and writing exercises. “I loved how all the different parts of sentences came together,” she says.

Joan spent much of her childhood reading and making up stories for her dog. As she got older, she became unhappy and introverted. In high school, she discovered the world of journalism. “It changed my life,” she says. “Instead of looking into myself, I looked outside of myself and focused on other people. I got a front seat view of life. Journalism saved me.”

She later became the editor for her high school paper. However, in college at Boston University, she majored in history instead of journalism; but, she holds no regrets. “Journalism is modern history,” she states. “I’m a geek for history.”

After graduating college in 1980, Joan took a freelance writing class that took her back into the journalism realm. While working at a community newspaper, she met her future soul sister, Ann Malaspina. After they left the paper, they both became freelancers for The Boston Globe in 1982. Over the years since, Joan has freelanced on and off for the Globe, writing for a variety of different sections.

“The world of journalism has experienced lots of cut backs,” Joan says. “Sections I used to write for are now filled with wire copy.”

Ann eventually moved to New York, but she and Joan still remain close, emailing every day, having parallel careers. Joan married a fellow writer, Fred Contrada, a longtime reporter for The Springfield Republican, and the couple had two children.

As Joan read to her children, she became fascinated with children’s literature. She began writing books for kids, with a focus on reluctant readers and those with reading disabilities.

“I was a very slow reader and still am,” she says. “I loved reading, but I couldn’t read too much without getting a headache. So, I feel like I can relate to that kind of audience. I think my style of writing is natural for their needs and mine as a writer. It’s been a good fit.”

In recent years, Joan earned a master’s in fine arts from Vermont College of Fine Arts in July 2015. While there, she worked on a draft for a picture book about Sylvester Graham who invented the graham cracker. (It’s the same Sylvester Graham that the local restaurant in Northampton, Sylvester’s, is named for. The book release party, to be announced at a later date, will be held there and copies will be sold at the restaurant.)

Joan is currently working on an essay for the March issue of a monthly magazine called The Writer. The essay is titled “Do Writer’s Need Thicker Skins?”

“It’s a ‘thin-skin’ writer’s guide to success,” Joan explains, noting she is a “thin-skin writer,” or one in need of supportive criticism.

Joan has also helped coordinate The Write Angles Conference for writers off and on for over 20 years, and she will gear up soon for next year’s event, the date for which will be posted soon on http://writeanglesconference.com.

Joan recommends that all writers find themselves a community. Also, she says, “Don’t put all your eggs in one basket. Instead of obsessing about one thing, I have different projects to work on. I look at my writing as a stove. I always have two things on the front burners and two things on the back burners, simmering.”