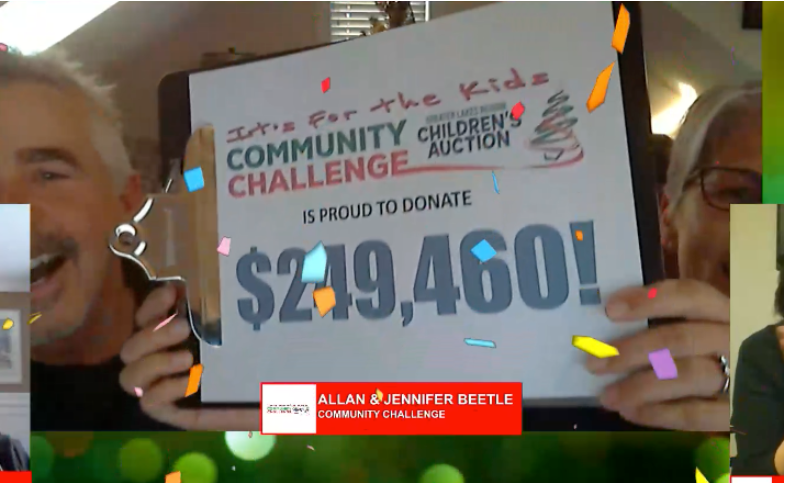 For about a dozen years, I’ve watched my big brothers and their wives host a fundraiser at their pub called Pub Mania. The annual, 24-hour event supported the Greater Lakes Region Children’s Auction, which offers annual grants to nonprofits that support children and families. Think food pantries, educational programs, and organizations from Boys and Girls Clubs to those that provide free lunches.

As Pub Mania grew, in the number of teams and dollars raised, I slowly got as involved as I could as a person living three hours away. I wrote a check most years, then I was a team member who took a turn sitting on a bar stool for one hour, as all Pub Mania team members did. Two years ago, when our father passed away, I sat on a team in his honor and did my most rigorous fundraising, bringing in about $1,000 for the Harvey’s Harmonizers Pub Mania team.

But I was involved for only one hour of the event. Then, I went home.

Last year, I had the opportunity to watch my brother Allan open and close a Pub Mania event, greeting team members, introducing presenters, speaking about the need, repeating how it was all “For the kids.”

It was humbling to watch Allan in action—to see how moved he was as children who benefitted from the auction’s philanthropy talked about their personal growth and how they were helped. I admired the authentic compassion Allan had for the hundreds of people on the over-30 teams that made up the Pub Mania core.

I wanted a bigger part in it. But Pub Mania was limited to the number of bar stools at Allan and Jeff’s restaurant, Patrick’s Pub & Eatery; one team per stool, so they were not accepting new teams.

Then, along came COVID-19, shutting down events like Pub Mania before we could say “social distance.” Allan and his wife, Jennifer, transformed the event into something new. They called it It’s for the Kids Community Challenge, the new fundraising arm for the Children’s Auction.

I formed a team made up of family members, friends from my longtime home base in Western Massachusetts and clients and new friends in the Lakes Region of New Hampshire, where my husband, Steve, and I now own a home.

The Janice Beetle Books team then started raising money and taking part in a host of fundraising activities promoted by the Challenge organizers. There were walks to raise money. Zoom events. There was an online portal for raising funds, and many on my team set up accounts. We made financial donations and one member donated two items to be auctioned off. We solicited funds. We got team shirts.

We created a book to sell. Called Mixed Words, it features work by nine clients of mine, including four women on my team. Proceeds from sales benefitted our team, and hence, benefitted the auction.

At this time, thanks in large part to one woman on the team who is a former salesperson, we have sold dozens of copies, and we still have some left. Mixed Words offers an engaging sampling of nonfiction, fiction, and poetry, and you can buy it here.

Once again, Allan, with Jennifer, led the closing ceremonies for the challenge teams. Many of my team members were on there, shedding a few tears along with our Zoom hosts and the captains and members of other teams as children who’d received services spoke eloquently about how they benefitted from programs such as Big Brother/Big Sister.

Allan announced a series of awards for teams that raised money and showed spirit. Given that this year there could be new teams, there was a new award for rookie team participation. What a thrill when the winning team was announced, and it was our team.

We began texting one another “OMGs” and other attaboys. How fun. We were a small team of only eight people, but we had spirit and might. We had a blast and raised about $2,800 in the process. Each one of us brought something special that assisted in the raising of funds.

Last year, Pub Mania raised roughly $350,000, bringing the total raised throughout the event’s history over $2 million. No one knew what would be possible this year, without a live event, with new teams, and in the midst of a pandemic that was crippling the economy.

I feel honored to have been able to take part in this great new event.