You are here: Home / All / Instilling Confidence in the Work 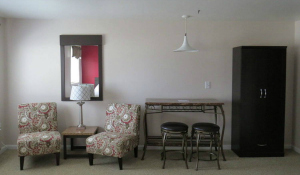 Here’s what Judy Kelliher and I learned last weekend as we worked all day Saturday and half the day Sunday on our books in progress:

We can do this hard work.

We left Friday afternoon for Misty Harbor Barefoot Beach Resort in Gilford, New Hampshire, where we had rented a room for the weekend. While the weather made it clear we wouldn’t be walking barefoot on the beach, we were thrilled to be headed north for a writing retreat. Making time to pursue your passion is a luxury that’s hard to come by for both of us.

After a dinner with my parents in Belmont, Judy and I talked about what we hoped to accomplish in our time together.

I had two sets of marked up manuscripts from Kayla Fontaine and Shannon Grossman, and I said I wanted to process all the good comments and direction I received from them and that I would be happy if I was able to edit three or four chapters.

Judy said she hoped to write chapters two and three of her book about her brother Bobby Kelliher’s two tours in Vietnam.

Saturday morning, we got down to it. We silenced our cell phones, closed out our email programs and sat in stillness, the only sound the thrumming of the ancient heater in the corner of the room.

I struggled with my chapter two for most of the day, thinking first I would edit it, and then, as I continued to consider Kayla’s feedback to “show don’t tell”—a familiar mantra of my own—I realized I did need to slow down and show this important time period in Roxie’s life more fully. Basically, that meant I had to write the chapter over, but by the time I went to bed that night, I felt I had done justice to all of the characters and the flow of the piece.

I spent Sunday shuffling chapter three around, but this work was more fun than the tediousness of the day before as it involved the creative fiction process I’m coming to love in which my mind eagerly and inadvertently tosses up bits and pieces of information, both real and imagined, and I weave them into the story. It’s so much fun.

Having previously finished writing the prologue and chapter one, Judy’s goal over the weekend was to create rough drafts of chapters two and three. She accomplished that—and even started on chapter four.  As she wrote these chapters, and reviewed chapter one, she knew there were more questions she needed to ask her brother Bobby to fill in the gaps she missed during her initial interviews with him.

She needs that level of detail from him to, hopefully, put the reader exactly where Bobby was in the late 1960s and early 1970s.

On the way home, Judy called Bobby from the car and booked time with him in her calendar. He was as excited as she was about the progress.

I am more than satisfied that I have a process established for moving forward on my book, giving my characters nuanced personalities and physical features and letting them speak more often and with more purpose.

I have my first writing session with Liz of Write of Passage Wednesday morning as I had to bow out of the last two due to deadline needs of clients. I know just what I will do with my two hours in her studio. I will keep going.

We’ll hear more about Judy and her work in a blog penned by Shannon two weeks from now.