You are here: Home / All / Inspiration Found in Jeanne Julian’s Creative Side 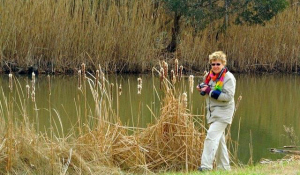 Jeanne Julian, a 61-year old poet and photographer from Western Massachusetts, published her first chapbook of poetry, Blossom and Loss, this past December. It compares the seasons of nature to those of life, because, as she says, “everything begins with blossoming and ends in loss.”

Jeanne says the inspiration for the opening poem, “Loss and Blossom,” came from the death of a former colleague’s daughter, exploring the idea of our never-ending satisfaction with life and our constant desire for more out of it. She hopes to convey the Buddhist idea of loss as a natural process, not something scary or alien, with the adoption of various personas throughout her poems.

We’re excited for Jeanne, who is someone Janice knows from her days as a student at Westfield State College (now University); Janice and Jeanne also worked together on the University’s alumni magazine, called Focus, before Jeanne retired in 2010. Jeanne was the editor before Janice.

Jeanne’s pleased too, of course, but she admits that when she presented her manuscript at a Pitch the Publisher session of a Writer’s Conference in March 2015, she didn’t feel very confident that it would get any attention. Some months later, she learned she won the prize, which included publication and 50 copies of the book.

She enjoyed the process of refining her work with the editors in a back and forth, tweaking and rewriting sections to satisfy them while also maintaining the integrity of her work. It was the first time in a long time that Jeanne wore the hat of the person being edited; in her career at Westfield State University, she was the editor.

During her 28 years at Westfield State, Jeanne worked as a public relations assistant, director of public affairs, and assistant to president for communications; she performed various media relations tasks, and wrote press releases and speeches.

Jeanne began writing creatively as a young child. While serving as an editor on her high school literary magazine, she began to grow tired “of love mourn poems” and developed a style of her own, leaning more towards narrative poetry.

She received a bachelor’s degree in English from Allegheny College in Pennsylvania and pursued a master’s degree in fiction writing at the University of Massachusetts, Amherst. She began to further pursue her passion with poetry after her poem, “The Last New England Winter,” was published in 2009 in the Naugatuck River Review, a journal established by another Westfield faculty member, Lori Desrosiers.

Since then, she has focused solely on writing poetry. She says she “feels like I found my calling.”

Jeanne has continually been published in the Naugatuck River Review, as well as Minerva Rising, Pinesong, and Kalalak. Within the past year, she has published over ten individual poems in various publications, most recently this past winter, in Poetry Quarterly, Fallen Leaf Press’s Nature Inspired Winter 2015 Anthology, and Snapdragon Journal.

Like her passion for poetry, an interest in photography came to her later in life, too; she says the exploration and experiences of going out and taking photographs can lead her to a poem.

Since Jeanne is retired, she has found more time to write and doesn’t have a set routine. She believes the process is important, that you have to get everything out on the page and then step back for a bit, before editing it.

The biggest challenge for her is learning to discipline herself when she doesn’t necessarily feel a rush of inspiration. But she recently joined a mixed group of writers, Neuse River Writers, to help gather feedback from other writers.

Jeanne is currently working on another chapbook, Relic and Myth, exploring the idea of objects and symbols in our lives that turn into myths or the things we believe in which may or may not be true. She is also working on a longer piece, Margins, from the perspective of people who are marginalized, dealing with the edges of our lives, such as close calls and margins of error.