You are here: Home / All / Helping a seasoned writer tell his story 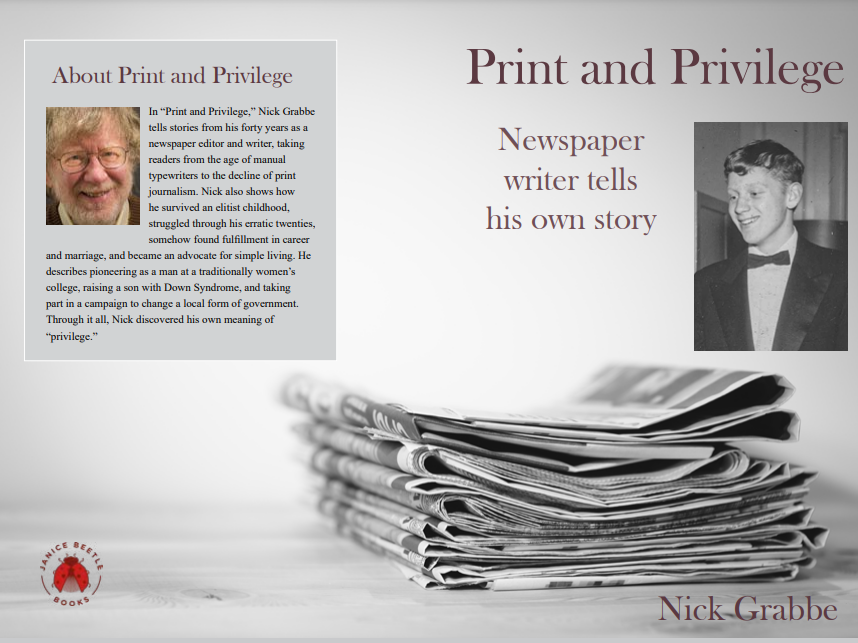 Nick Grabbe was a longtime editor of the Amherst Bulletin, a weekly paper that covered Amherst, Massachusetts, and was owned by the DeRose brothers, who also were the publishers of the Daily Hampshire Gazette.

I met Nick in the late 1990s, when I was working for the Gazette as special sections editor; it was my job to assign, edit, and lay out the stories in 52 sections the paper put out each year, from its Wedding Showcase to Spring Home & Garden to First Snow.

Nick worked in Amherst most of the time, but when he was producing pages for the Bulletin—laying them out and walking them through the process of getting plated and readied for the press—he worked in the Northampton office. He and I often were readying pages at the same time.

Nick is roughly a decade older and wiser than me. Back then, he kept to himself, yet his reputation spoke volumes. He was known as a tireless advocate and defender for the Bulletin, a hard worker, and a particular editor. I was a bit intimidated by him for all of these reasons. I don’t remember that we spoke much, aside from idle chitchat in the break room.

I left the newspaper in 1998 to start my business, Beetle Press, and Nick was still plugging away for the Bulletin. I didn’t hear from him or of him until late in 2019, when he contacted me because he had written a book and was looking for an editor.

In true Nick character, he had a healthy list of questions for me to answer about my editing style and approach, and wanted to know what other clients I had engaged. He sought permission to speak to a recent client and ask some questions, and I was happy to agree.

Nick’s questions for my client were good ones. First posed by Nick to author Judith Kelliher, these queries continue to be put to use when I complete a project and seek client feedback. They tend to get at the heart of each client’s work with me.

A Q&A with Nick, which also makes use of his questions, will post in the coming weeks.

Called “Print and Privilege: Newspaper writer tells his own story,” the memoir is about Nick’s life, beginning with his privileged childhood, growing up in Washington, DC, in a family with a Russian count in its family tree.

“Print and Privilege” tells the story of Nick’s forty years as a newspaper editor and writer, taking readers from the age of manual typewriters to the decline of print journalism. He shows how he survived an elitist childhood, struggled through his erratic twenties, somehow found fulfillment in career and marriage, and became an advocate for simple living.

Nick also describes pioneering as a man at a traditionally women’s college, raising a son with Down Syndrome, and taking part in a campaign to change a local form of government. Through it all, Nick discovered his own meaning of “privilege.”

As a journalist in Western Mass, I found the book to be fascinating. I enjoyed reading about Nick’s roots and his early entry into the local scene. I also recognized some of the characters Nick worked with and was impressed by the methodical, thorough way in which Nick led the Amherst Bulletin, the creative stories he assigned, and the meticulous notes he kept about his work and ideas.

In reading Nick’s book as I made my edits, I also enjoyed Nick’s own introspective look at himself as he matured into a husband, professional, and father of two.

When we started working together, Nick asked me to read his book and offer my feedback and suggestions. These ranged from starting the book with a broader look at his world to providing readers with a deeper look at his parents, sister, and wife, Betsy Krogh. Nick accepted almost all of my recommendations, and I enjoyed the easy way in which we interacted.

As we neared the design phase, it was exciting to enter into email conversations with Nick about particular words, phrases, sentences. I don’t often have this level of engagement with clients, as many of them are not longtime writers, as Nick is. Nick and I kept each other on our toes, and together, we did our best work.

Whether you live in Western Mass or read the local papers here, you will enjoy Nick’s book. It is an honest look at a life in which things didn’t always run smoothly. “Print and Privilege” also provides seasoned journalists and those with little knowledge of how a newspaper runs with an inside look at what’s involved, the pressures, the ethics.

“Print and Privilege” is coming soon. Make room on your shelf!