You are here: Home / All / Helping a Client Get the Good News Out 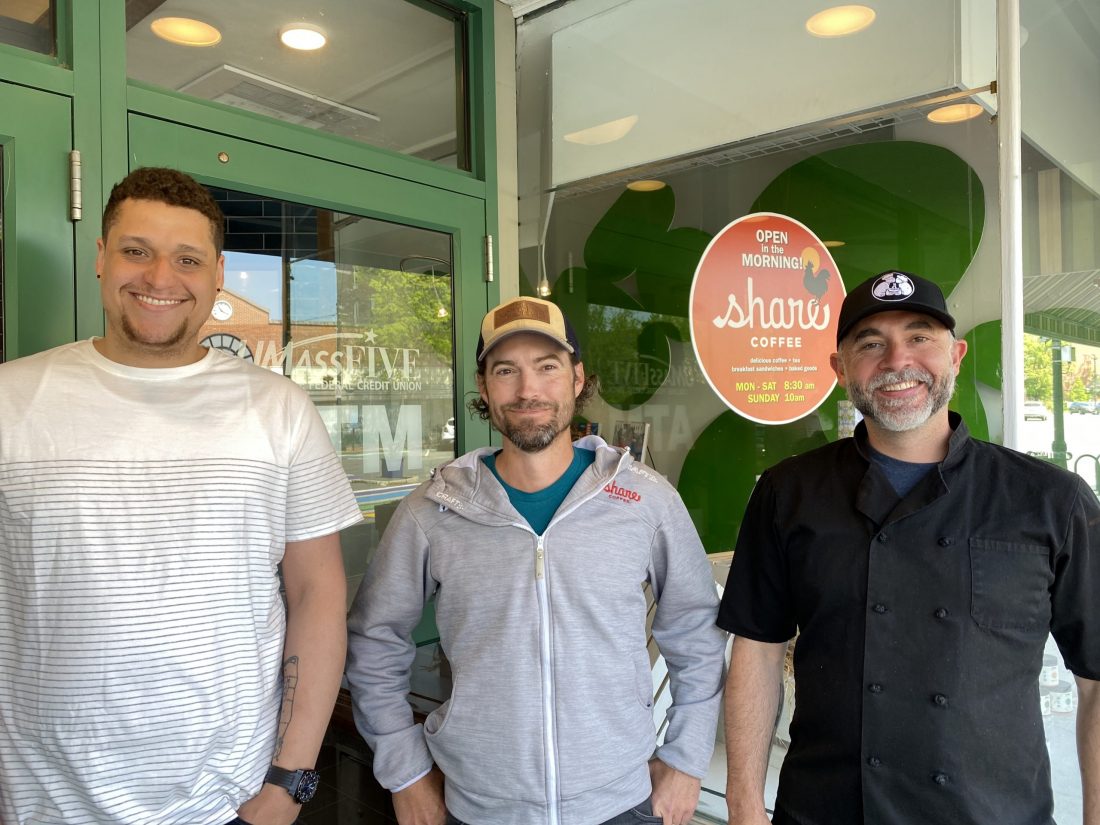 Business remains steady for Janice Beetle Books, and Beetle Press is getting busy again as well. Through my PR business, I write blogs and craft press releases for Thornes Marketplace in Northampton to help raise awareness about events and individual shop owners. This month, there was such good news from Thornes, I share it here as well! I got to help the popular shopping center announce its return to its pre-pandemic hours as well as the regrouping of three of its restaurants, two of which are reopening in June.

The pandemic hit business owners hard—restaurants especially—so the leaders of Thornes Marketplace were thrilled to announce the return to an early morning opening of 8:30 a.m. as of May 10, allowing Share Coffee on the main floor to once again serve morning commuters, and two other Thornes restaurants expect to reopen in June.

In addition, the main marketplace is also poised to continue to follow the commonwealth’s requirements regarding mask-wearing and social distancing indoors. Door monitors and staff will continue to enforce this requirement, and when Massachusetts lifts the indoor mask requirement on May 29 for all, or just those who are vaccinated, they plan to eliminate the door monitor position.

Mask-wearing will not be enforced inside the building; individual shop owners may enforce their own rules, however. The majority of shop owners and staff have been vaccinated.

The last year has been a very difficult one. Thornes leaders appreciate the continued support and understanding from shop owners, their staff, and customers as Thornes navigates what is hoped to be the final hurdle in reopening.

Paul and Elizabeth’s will reopen on June 3, and Patria—a new business on the lowest level of Thornes that opened shortly before COVID-19 forced closures—will begin serving in early to mid-June from a new six-course tasting menu.

Since Thornes reopened for business on June 8 last year, following a lengthy closure brought about by the pandemic, it has opened its doors at 11 a.m. The earlier opening allows Share Coffee to serve customers once again during its busiest time of day.

“We’ve been affected by the limited building hours,” says Ken Majka, owner of Share Coffee in Thornes and in Hadley and Amherst, and in Montague, where Ken has a café and pub. “That was definitely impactful, and we’re looking forward to getting open earlier.”

Share is now open Monday through Saturday at 8:30 a.m., and on Sundays, at 10 a.m.; the cafe serves coffees, teas, breakfast sandwiches made to order, fresh bakery items, salads, and other light fare.

Ken is working to get his tables and standing bar set back up inside Thornes; in the meantime, orders are served to go.

Nate Sustick, the son of Paul and Elizabeth’s longtime owners, Paul and Elizabeth Sustick, and the restaurant’s general manager, says their restaurant was closed for about a month last spring and reopened in April for takeout only. He’s pleased to be able to reopen for in-house dining on June 3.

“It was a personal comfort level for me and the staff to wait until everyone was vaccinated,” he explains. “All will be fully vaccinated by mid-May. I’m looking forward to the next step. This has been a long road, and it is almost like starting anew.”

The closure and downsizing led to a loss of regular staff, so Paul and Elizabeth’s reopens with a new team, with some former employees at the core. Nate says, “This pandemic’s been survivable with the support from the local community and government funding. It’s been amazing.”

Paul and Elizabeth’s will reopen with 50 percent of its seating—about 40 to 50 seats, and Nate will encourage diners to make reservations using the app, Resy.com; walk-ins will also be welcome.

He says he is both refreshing and trimming the menu, keeping classic items and locally produced food, such as produce and seafood from Berkshore, which will soon provide striped bass, bluefish, and scallops as they become available.

Patria was a brand-new restaurant located on the basement level of Thornes in the space formerly occupied by ConVino when Thornes was closed in March due to the pandemic.

Aaron Thayer, who owns Patria with his wife, Abby Fuhrman, is pleased to reopen in early to mid-June with a new six-course tasting menu in the dining room; small bites will be featured at the bar and in the lounge, and the cocktail menu has also been revamped.

Aaron says the new menu allows people to order the six courses, which will be tailored for those with allergies or other dietary restrictions, and the items arrive one at a time. “This well-curated and creative tasting menu shouldn’t leave you feeling engorged at the end,” he says.

Inside Patria, roughly 24 seats will be available in the main dining room, with 20 in the bar and lounge. Some seating will also be available outside on the patio.

Aaron is a chef with experience at exclusive, fine dining establishments in Boston and San Francisco—and at Coco & the Cellar Bar in Easthampton.