You are here: Home / Adventures / Heading to Hilo 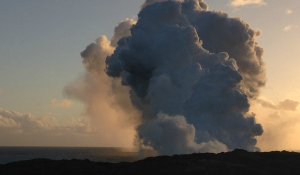 Note: This is the seventh of fourteen parts. Click here to read from the beginning.

After being on Kona for about 10 days, Molly and I decided to venture to the Hilo side of the island, where they receive over 200 inches of rain a year. We wanted to explore the Kilauea Volcano and view the current lava eruption, which became active in 1983.

Even though we intended to climb the 14,000-foot Mauna Kea as part of this side trip, we took the Versa. It’s more reliable than the Subaru, and if the Versa were to break down, we knew we could simply call Budget for help!

We started our cross-island adventure just after the sun rose on Wednesday, Dec. 28, 2016, and the signs told us we’d reach the Hawai’i Volcanoes National Park in 74 miles. The Big Island of Hawaii is the same size as Connecticut, roughly, and the travel guides say it holds 13 of the world’s 15 or so climate zones. Over the course of the next few days, we would experience about a half dozen of them; we were prepared to layer up and down, often, with everything from bathing suits to boots in our luggage.

We headed south on 11, taking an hour-long detour pass Green Sand Beach to the cliffs that are said to be the southernmost point in the U.S. We stopped at a cafe with amazing potted sedums and other succulents in a nursery full of orchids and had coffee/tea and breakfast bars made with Lilikoi, or passion fruit.

When we entered the national park about 90 minutes later, we didn’t yet know what we didn’t know. We ran to the visitor’s center in a down pour, well aware that the climate had become a rain forest. We got inside just in time to watch a park ranger give a spiel about the best areas for viewing the lava and the best time of day to do so.

We learned you can’t drive very close to the eruption because lava from a 2014 flare-up covered a center section of Chain of Craters Road, which takes you there; we learned the best viewing of the current lava, which was spilling into the ocean, was still about an hour away by car—where one could access the other end of the road via a 4.5-mile walk. Finally, we learned it’s best to watch the lava at night as it’s easier to see; we did not know this and that changed our plan radically as it meant we had more time!

We still drove into the park on the west side on Chain of Craters Road because there was much to see in that area. We walked through a lava tube, for instance, saw a half dozen craters and took a short hike to view some petroglyphs preserved in the volcanic rock in a mountainous region. I regret that we did not stop in the museum. We were conserving time, but we learned later there are views of the active lava from within.

As we drove down and deeper into the park, at some point, we noticed a giant plume of steam in the sky and realized with very bubbly excitement that this was the molten lava hitting the ocean and filling the sky with clouds. It was awe-inspiring, and we drove as far as we could, getting closer and closer, but then we had to turn the Versa around when we hit the closed area of roadway. (We could have hiked in on this side, but the climb is longer and harder, and we wanted to get to the other side because that’s the side where our night’s lodging was.)

We drove straight up for 45 minutes to get back outside the park and stopped in a little village called Volcano for lunch, gas, extra batteries for our borrowed head lamps and to charge our tech equipment. Then we drove an hour to Hilo side and down to the coast into a town called Kamokuna. We parked our car, geared up our packs and started what would be a nine-mile hike round trip in a dry and dessert-like climate.