You are here: Home / All / Heading Back on Retreat 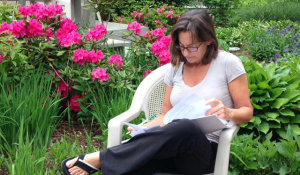 Friday night, my dear friend and fellow writing partner Judith Kelliher and I are heading to Amherst, Massachusetts, to settle in to a bed and breakfast known for its support of women writers. And once again, we’re going to quietly work side by side on our books.

Judy is working on a nonfiction book about her brother Bobby’s two tours of duty in Vietnam; I am struggling to finish my first work of fiction, at present called Unleashing the Sun.

My hope is to finish this book in the next six months and then take it on the road, across the country, for an adventure the proportions of which I have yet not seen. I fantasize over ads for trucks and camper trailers, as I consider this journey.

But let’s not get ahead of myself. I have a lot of work to do still, and no time to do it!

As I get ready to sit down and go through my book from the start, I thought I’d offer an excerpt, the book’s beginning. Feedback is most welcome. Whether you like it or hate it, please post a comment at the end!

Almost two years after my husband died, an unwitting plumber somehow became the focus of my desire. It started when the elbow joint in my kitchen sink rusted out, and I found Lanzio through Angie’s List. He was stereotypically tall, dark, and handsome. My infatuation escalated quickly. Suddenly, the washing machine that had leaked for months in the rinse cycle, leaving puddle after puddle on my basement floor, needed to be addressed immediately. Likewise, I had Lanzio fix the dishwasher that refused to click into the dry cycle. The faucet in the upstairs bathroom leaked; Lanzio repaired that too, and then I ran out of legitimate excuses to call him, so I created work. I had Lanzio replace my shower head simply because I liked having him around. He liked to play board games, had no children, looked young, and had all his own hair and teeth.

Each time Lanzio came for a project, real or fabricated, I enticed him with craft beer, a bag of Cape Cod potato chips, and cheddar cheese so he would stay for a game of Scrabble or cribbage. I wondered if he thought I was pretty and talked about him nonstop with friends. I ignored that he was clearly more interested in competing with me than in wooing me. I also ignored that while Lanzio was olive-skinned and svelte, he had no interests that intersected with mine. He was thirty-four and had in mind the possibility of having a few children. He liked auto racing and subscribed to Auto Mechanic magazine. I am forty-eight. I wouldn’t know a spark plug from an oil filter, and I am done raising children, but still, I pursued that plumber as if he was the only man in the Lakes Region of New Hampshire.

It was my late husband who finally brought me to my senses, communicating with me from the beyond one early spring afternoon as I raked what remained of the fall leaves from my yard. I was thinking about Frank, and about Lanzio, and men in general, and the fact that I had failed at the only major relationship I’d ever entered into, when suddenly Frank’s voice piped up from the inside of my head.

It startled me to hear his voice, but I’d always respected his counsel. Only then did I step back into objectivity and notice that my plumber smacks his food when he eats, and he smells like a crushed garlic clove, too.

So one day I sat warming myself next to the radiator in the dining room like a cat and thought, “Well, if not the plumber, then who?” Not a name or face occurred to me at first, and then I remembered the guy who visited my business networking group a year ago. He worked for a company that developed and sold wind turbines. He was short. Cute. Also dark and handsome. He seemed sweet and gentle. He’d asked me if I lived in Gilford, and I took the question as a personal advance, and even though I was attracted to Alex, I said, “No, my husband and I live in Belmont.” And then I felt guilty for the lie and said, “Well, I live in Belmont.” I didn’t mention my husband was dead and that I might as well have killed him.