You are here: Home / All / Guest Blogger Talks about Why She Writes for Children 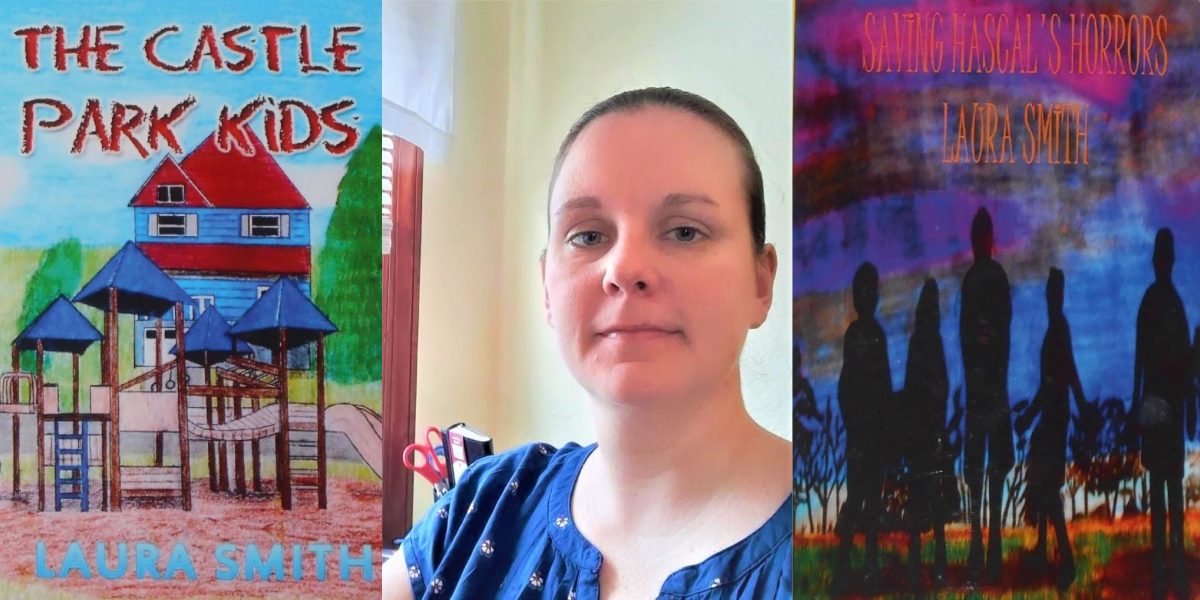 Note: As I worked to publish “Willful Evolution: Because healing the heart takes strength,” I reached out to online bloggers and print reviewers alike to secure book reviews. One blogger who responded to me was Laura Smith. She was too busy to review the book, but she offered me the chance to submit a guest post to her blog, which will upload in April, and she will post a Q&A style interview with me in October. I wanted to return the favor, so this week’s post is from Laura Smith, who talks about why she writes for children.

Here is Laura’s bio to get you started!

Laura Smith is a middle-grade novelist, blogger, and reviewer from Pittsburgh, Pennsylvania. She earned her bachelor’s in creative writing from Carlow University in 2007. Since then, she has self-published three middle-grade books and is working on traditionally publishing her first middle-grade trilogy. When she’s not writing books, Laura works on her blog, Laura’s Books and Blogs, writing essays, book reviews, and posting author interviews. She also writes for HubPages, Horrorscreams VideoVault, and LitPick. Her work has also been featured on these websites: Ok Whatever, Cleaver Magazine, ProWriting Aid, and Support for Indie Authors.

When you’re a kid, it’s impossible to imagine your life as an adult. It’s such uncharted territory, full of intimidating tasks (paying bills?), romanticized notions (driving a car), and concepts that far exceed your understanding (having a baby). Even though I was always mature for my age, the idea of growing up scared me. I understood childhood. It made sense to me. Adulthood didn’t, and in a lot of ways, it still doesn’t. That’s why I write for children.

Learning how to write

One thing I’ve always been certain of is that I’ve wanted to write. From the age of two, I was practicing my letters, following along with the songs and lessons on each episode of “Sesame Street,” and having the same books read to me so many times that I memorized the words on each page.

When I got to school, I was so excited to learn how to read and how to write, not only print but cursive writing. Like childhood, writing made sense. It came so easily, and it was something I liked doing, not only in school but in my free time as well.

I understood that books were written by grownups, but that didn’t stop me from writing as a kid. I began writing down stories as early as kindergarten, asking my parents to spell out the many words I didn’t know how to spell. I wrote for myself, but I also showed my stories to anyone who would read them.

What I get out of writing

I always got a lot of praise for my stories. Whether it was an essay assignment for school, a made-up story about my siblings and I walking 400 miles from the beach to our house, or fan fiction that I wrote for my friends about my favorite bands or movies, writing was my main source of self-esteem. That combination of desire, skill, and praise forged the perfect path for a writing career.

It allowed me to work out issues or thoughts, escape from my real life, and essentially play God, creating worlds and characters and allowing me to manipulate them at will. Writing gives you so much power in a powerless world, especially in those scary teen years.

Then, I got to college, and my inspiration plummeted. I still liked writing papers and essays, but when it came to stories, I was blocked. I always managed to squeeze out stories to workshop in class, often writing in the summer in order to have a back catalog of story drafts to adapt during the school year, but it was tough trying to think up ideas. I didn’t feel worldly enough to write like an adult, and while I loved college life as a full-time commuter student and member of several academic clubs and groups, it just didn’t inspire me to write about college life.

Returning to my roots

Once I graduated, it took me a few years to realize that I was no longer bound by the restrictions that college had put on me. I could go back to writing the stories that I wanted to write, and I found that my desire to write for children was still there.

Suddenly, no longer was I not blocked, but I also recaptured that desire to write. It occurred to me that writing had started to feel like a chore. Attaching a grade or an expectation that what I write needs to be publishable was killing that creativity, sense of accomplishment, and self-esteem that writing once gave me, and once I gave myself permission to write what I wanted, that all returned.

In between graduating and finding my first job, I began to write my first novel, adapting a short story I’d written in class into a middle-grade novel for pre-teen girls called “The Stable House.” I thought writing a novel was going to be overwhelming and take years, but it came so easily. I had no outline and no idea of where the story was going. I just sat down at my laptop each day and continued where I had left off the day before, and by the end of each writing session, I’d have between five to 10 pages of my first draft typed out.

In just a few months, my first draft was finished, and by the end of the year, I felt I’d revised enough that I was ready to start submitting to publications. After a few dozen rejections, I decided to prove myself by self-publishing. This is what I did for the next several years, eventually self-publishing three middle-grade novels.

How I plan and plot my novels

If you asked me what’s the best age in the life of a human being, I’d say 10 years old. Every novel I have written since has contained main characters ranging from nine to 11 years old. So, now when I sit down to write a new book, I’m immediately comfortable knowing my audience, my characters, the limitations, and the possibilities that this genre encapsulates.

The next thing I ask is what message do I want to put out into the world for this age group? What advice, lessons, or experiences do I want to impart on them? For “The Stable House,” I wanted to show pre-teen girls what to expect when transitioning from elementary school to middle school. Set in the mid-90s, it specifically outlines my experiences but with the intention of the experience being universal enough to translate to a modern reader.

Then, I ask myself what topics interest me? What knowledge or worlds do I want to share with my readers? For my second novel, “Saving Hascal’s Horrors,” it was my love of horror films. Even though I didn’t get into horror until middle school, it was fun to explore that love with my favorite demographic and to hopefully inspire them to get into it even earlier than I did.

My third novel, “The Castle Park Kids,” came about after having a conversation with a friend one night. Usually when someone starts a sentence directed at a writer with, “You should write about…” it can cause a lot of subliminal, if not blatant, eye-rolling. But she hooked me by saying, “You should write about the games we used to play at the park growing up.” That was all I needed to hear, and I was starting my first draft the next day.

Finally, I like to ask myself, “What tough life lessons or experiences can I share with my readers?” For my latest book, “The Secret Superpowers of Molly Bright,” the answer to this question was childhood bullying. Bullying is such a universal topic that I had a lot of experience with and felt like it was a relevant topic to explore at this age level.

I wanted to present as many different forms of bullying as I could. So, every character in the book, from Molly’s disfigured face after a horrific accident, to her jock sister being bullied by her track coach, to her biracial best friend being racially targeted to her older cousin getting beat up for being gay, there are so many avenues that children can connect and empathize with.

Throw in a superhero angle, another beloved topic of both mine and kids, and I have the strongest story I’ve written yet. I also have plans to turn it into a trilogy, broadening my process and allowing me to try new things while still staying in my comfort zone.

What writing has given me

Many authors steer clear of writing for children because they want to write about adult topics. But I never felt like writing middle-grade fiction kept me from writing about heavy or important topics. Everything I’ve ever written has had a deep message behind it. And I never talk down to my audience. I want my characters to feel mature but authentic and for the conflicts in my story to be real and even scary or intimidating yet age-appropriate and handled from a child’s point of view.

Writing for children has given me the opportunity to realize my dream of becoming a writer and to write the types of stories I’ve always wanted to read: stories about real kids with real problems in real situations. Any fantasy or supernatural elements are still grounded in the real world.

This genre just fits for me. It keeps writing fun, gives me specific sandboxes to play in, and makes me want to continue writing, no matter who reads it.

There’s a great piece of advice that circulates for people in every creative profession, and that is to quit if you can. Writing is too difficult, time consuming, and competitive a job to do casually. You have to love to do it and want to stick with it in order to get anywhere.

I see so many people who want to become writers but don’t put the work in or quit when they have a setback or aren’t meeting their goals fast enough. You don’t have to start when you’re five, but you have to be able to not want to stop until you physically can’t do it anymore. And most importantly, don’t let others tell you what to write, who to write for, or make you feel like you have to do it for a reward (a grade, a check, recognition, etc.).

For me, my motivation is writing for kids. It allows me to write the topics that I want, for the audience I want, and leave the legacy I want in my work. It also allows me to return to childhood, even if it’s just in my mind, to a life that’s just as challenging in many ways but in the end, so much more desirable.

Here’s where you can find Laura online: