You are here: Home / Adventures / Going Home to Florida 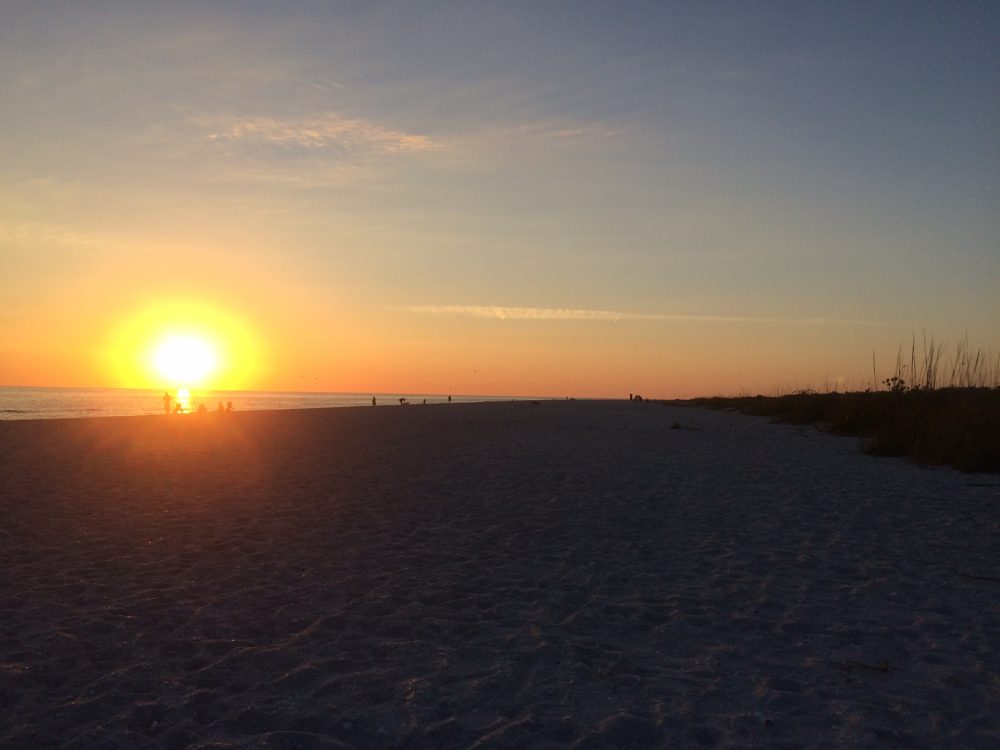 Note: This is the third of three parts. Click here to read from the beginning.

The sun rose behind me as I drove west to Sanibel from my brother’s house in Vero Beach, Florida. I enjoyed watching the landscape, which was flat, grassy, and sprawling, and lined on both sides with cattle farms that went on and on and on for miles. Then, citrus trees, lined in neat rows, were the focal point to my left and right for at least 45 minutes.

I was elated when I finally arrived in Sanibel, Florida, about four hours after leaving Jeff and Wendy’s cozy house. This was my sixth year there, but I’ve never made any of the travel arrangements myself. I am usually along for the ride, so I felt both proud to have gotten myself there as well as happy to be nestled somewhere familiar and pristine.

I went running on the beach on Captiva, and then I set up my cooler, beach bag, and towel on the Sanibel side of the bridge, across from the Castaways cottages where I’ve stayed in the past. I read my book. I walked the beach in search of shells. I napped, and I settled deeply in to myself. To Sanibel.

It got cold about 4 o’clock. I had to put on long pants, my fur-lined winter boots, and my The North Face jacket. About 6, I wrapped myself in a fleece-lined blanket. I was shivering, but I was determined to sit there and watch the sun set at 7:37 p.m. I had not seen that phenomenon, in this setting, for twelve months.

When the orange orb dipped under the horizon, I drove to my cheap hotel in Fort Myers, where there was no management on site and the hallways stunk of cigarette smoke. (But it was still nicer than Shelley’s.)

As I settled in to my room, I had my first wave of loneliness, but a friend called me unexpectedly, and we talked until it was time to turn out my light.

I spent the next two days facing the Gulf of Mexico at Bowman’s Beach, following a similar agenda as I kept to on day one: Run, eat eggs, nap, read, walk the beach and search for shells, nap, day dream, eavesdrop on others, watch the sun set.

One goal I had for myself on this mini-adventure was to think about the concept of home, what it means to me. What makes me feel like I’m home? Nothing profound came to me. Until my last night on the beach.

I was listening to a young couple near me. It was his 25th birthday, and he received frequent well-wishing phone calls. He’d also been drinking most of the day and had a mean attack of the hiccups. He and his pretty girlfriend laughed long and hard.

A young boy nearby put a ring from a ring-toss game around his neck and said to his sister, “Look, I’m Saturn.”

I started to wonder why the hell I wasn’t at Jeff’s, sitting in the screen room with them by the pool, with my own family. I felt homesick, and alone. I thought about that moment when I recognized Jeff as a deeply personal part of my life.

Then my mind sped through other recent memories. I thought about a fall afternoon spent watching football at my daughter Sally’s house, when she and her husband made me dinner and indulged me. I remembered a winter weekend at my younger daughter Molly’s house, where she and her boyfriend CJ were also largely focused on my contentment.

And I thought about the few days I spent at Allan and Jennifer’s house over her birthday, and how hard we laughed and how much we connected. I pictured my housemate Craig driving me to the airport for this trip and knew his would be the face that greeted me on the way home.

Then, I had the epiphany that Jeff and Wendy are what is home. Allan and Jennifer are home. Sally, Tommy, Molly, CJ, Eli. Craig. All home.

Home is about love, but also about history, support, giving, taking. Home is wherever you left the people who nurture and look out for you.

At that very moment, Jeff called me as I sat there on the beach waiting to witness my last Sanibel sunset for 2018. He told me about taking his grandsons to a minor league baseball game earlier in the day. Someone in the crowd gave Charlie a fly-away ball, he said.

I drove back to Jeff’s the next morning, arriving as the gang was finishing breakfast. When I walked in, with my cooler and bags, they all turned and said, oh so casually in a sing-song chorus of voices, “Welcome home, Jan!”

They had no idea what that meant to me.