You are here: Home / All / Fueled by Maternal Strength 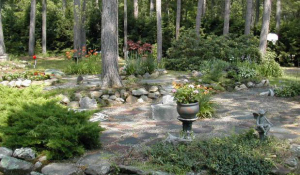 Friday, I had 11 cubic yards of mulch delivered to my house. That’s a lot of mulch – more than double the amount that most gardeners I know spread. It meant my weekend work was cut out for me because I hate to have a task hanging over my head.

Friday afternoon, I worked for four hours in the spitting rain, spreading mulch in my front and side yards, and after a day off on Saturday, I turned to the backyard for another four hours of back-breaking, hamstring-stretching work.

I was still sore from my first stint. I had a lot less energy, and it was Mother’s Day and gorgeous; all I wanted to do was plunk myself in the sun. But because it was Mother’s Day, and because my mom is no stranger to hard work, I thought about her, and she kept me going.

My mom, Evelyn Beetle, is no shrinking violet. When she sets her mind to something, watch out.

I grew up in Walpole, MA, and we also had a summer house on Lake Winnisquam, NH. In our year-round house, I watched my mother toil over normal household chores and special projects like creating clever Halloween costumes, wallpapering walls and preparing sit-down meals for a crowd of 20.

But it was in NH, on our piece of property overlooking the south end of the lake, that I really saw my mom roll up her sleeves and get dirty. All the time.

When my parents were newlyweds, they bought the Camp, as we called it, from my paternal grandfather for $1. The house was a one-room guest house at the time. After I came along about 15 years later, the Camp had evolved to a two-bedroom summer camp complete with a kitchen and bath.

In my teen years, I watched as both my parents worked to continue improving the house, adding on a porch, a bigger kitchen and a new bathroom with their own two hands and those of hired help and neighbors who provided direction and more skilled labor.

When she wasn’t calling the hired hands Beardie (because he had a beard) and Gummie (because he had no teeth but chewed gum constantly), my mother was working her tail off. And when the renovation project was done, she set her sights on the outside of the home.

Aside from the gorgeous view down to the water, the yard at that time was not much to speak of – dirt with patches of grass here and there. The neighbors’ homes on both sides were in clear view. Over the next four or five years, my mother worked to turn that yard into one that was worthy of magazine coverage.

She planted hemlocks along both property lines. She planted rhododendrons, flowering miniature trees and other shrubs around the foundation of the house, and in front, she created a brick patio and a flagstone patio, not to mention two separate sets of stairs – made of concrete block – down to the water.

I have vivid memories of my mom on her knees in trap rock dirt she had pounded flat, ordering bricks in place, securing them, using a deft combination of patience and strength (and cursing a lot, too).

Then my mom made rock walls, lugging each and every rock from the gravel pit a half mile away (with her car; she wasn’t crazy). In and around the patios and between the confines of these new walls, my mother then sought to plant perennial gardens that would knock your buds off.

Lilies, daisies, black-eyed Susan’s, sedums, ferns and some Lady Slippers she transplanted from nearby woods (sssh, don’t tell) mingled with annuals such as geraniums, coleus and impatiens. There were blooms all summer long.

I was so proud of our yard and my mom.

My mom had some serious inner-strength. She knew how to push herself.

It’s no surprise then that I know how to push myself too, and no surprise that each of my parents’ children are entrepreneurs who think up projects with their own unique minds and then get the jobs done.

My mother has slowed down some, but I bet there aren’t many octogenarians out there like her. She still dabbles in her garden, moves all the living room furniture around herself when she wants a new “look,” and she’ll still take on big projects, like knitting a quilt-sized afghan for the annual family Yankee Swap.

You’re something else mom. Thanks for having all that gumption and being a good role model to keep your eyes on. I love you!