You are here: Home / All / Flight of Integrity is Raw, Real 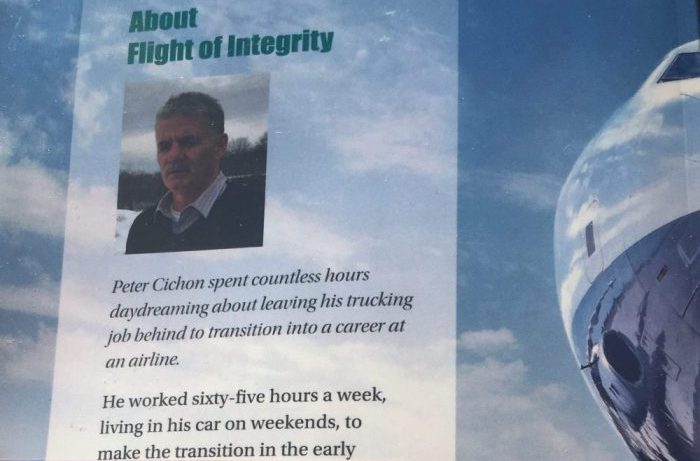 Flight of Integrity doesn’t hold anything back.

I worked on this book with Peter Cichon of South Hadley for the past four years. It’s about Peter’s former career as a ramp agent for a major airline that is now defunct. Peter’s experience there traumatized him. His reason for telling his story was to free himself of the shame he felt after he and the airline parted ways.

Early on, Peter and I made the decision against offering a nonfiction account to protect some of the individuals and the airline itself, but rest assured that the story is true. I have held the documentation in my hand. It remains at my house in a set of cardboard boxes.

Judith Kelliher, a longtime colleague, helped me interview Peter many times, and we also interviewed his colleagues, his wife, his friends. In writing, I invented only some dialogue and situations.

In the book, the main character is James Kowalski. He grew up poor and developed a work ethic that served him well. James became an exceptional laborer and was praised by every employer he had. Working as a truck driver, James dreamt of changing his career; he fantasized about working at an airline.

When he was finally offered a job as a ramp agent—loading and unloading baggage and maintaining airplanes for Arrow Airlines at Bradley International Airport—he jumped at the opportunity. James also took on the volunteer role of managing employee payroll because he loved being a part of the success of the airline.

James felt invincible, as if the airline wouldn’t run well without him. He was revered by his colleagues—except for three minorities who caused problems for all airline staff. These three men go AWOL from their work stations. They refuse to do their jobs, claiming they are given the worst assignments because they are minorities.

The prologue introduces the reader to one of the three: Juan Delgado, who is fired in 1993 from HomeAir at Logan Airport for sexual harassment and other offenses. Juan is later hired at Arrow, and James’ problems begin.

Flight of Integrity is not for the faint of heart, and it will stir emotions. Releasing the book makes me as anxious as it does excited!

Peter and I have scheduled a first event for Tuesday, November 5 at South Hadley Library at 7 p.m. I will tell the story of how Peter and I partnered to tell this story, and I will read several excerpts from the book. We will then take questions from the audience.

If you would like to purchase the book to read before the event, you can find it here.

I am eager to hear your thoughts and interpretations!