You are here: Home / All / Filling a Niche for Local Authors 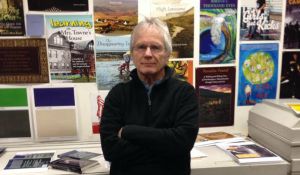 Steve Strimer says the Pioneer Valley is rich with authors who have something to say, and the traditional publishing world is getting more and more difficult for them to navigate. This set of circumstances was the main catalyst for the print shop Steve works for, Collective Copies, to develop its own publishing company six years ago in September.

The goal of Levellers Press, which is primarily run by Steve, a 65-year-old Northampton resident, is to give opportunity and support to local authors.

If a manuscript is selected for publishing through Levellers, the Press takes on the layout, design and early stages of marketing on behalf of up-and-coming local authors to give them a shot to get their work out there. Steve says the rewards for him are great; he has developed many good relationships with writers over the years.

Levellers and Collective Copies have created the Off the Common Bookshop within their shop in Amherst where all Levellers titles can be found, along with self-published titles that have come out under the Off the Common imprint. Most books are now available in Kindle, Nook, and Google Play digital versions.

Once the “start-up costs” have been recouped, Levellers Press and its authors share the surplus on each book 50/50. Thanks to the authors’ local reputations and network of friends and family, a Levellers’ title can break even within the first few months, Steve says.

Still, Steve says Levellers’ methods are a bit unconventional as it has no national distributor due to the small-batch printing technique; books are printed on demand, between 25 and 200 at a time, based on need, making it difficult, cost-wise, to distribute on a larger scale.

To date, Levellers has published 60 books, and Steve plays a large role in the manuscripts that are chosen. Some of the biggest selling titles are The Curse by Robert H. Steele, The Wealth of the Commons: A World Beyond Market and State, and Slavery in the Connecticut Valley of Massachusetts, by Robert Romer. Romer’s title was the first title released by Levellers.

The name of the press derives from the Levellers in England who, during the period of Cromwell’s England, fought for extended suffrage and equal rights under the law.

Of the 60 books that have been published, only three are from outside of Western Mass, two from Boston and one from Connecticut. Steve says this is in keeping with the local model of the business.

Steve has been in the industry for a long time, starting off at the Daily Hampshire Gazette in 1973 as a “pre-press guy.” He learned a great deal about the printing process and eventually started the worker-cooperative Common Wealth Printing in 1977. In 1997, he needed a change and became more interested in digital printing, joining Collective Copies, another worker-owned collective.

Levellers continues to branch out and grow; it is in the process of creating two new imprints at the moment. For poetry, Hedgerow Books is taking off with approximately one or two manuscripts per year. Thornapple Books is taking submissions from all across the country on the hunt for the next great American novel.

Imagining and growing Levellers Press was a great business move for Collective Copies; there are so few copy shops in the area now as traditional copying has moved in-house and online. The book business helps keep sales and business going, and it has really paid off.

Steve is also very active in the rich history of Florence, having participated on the committee of the Sojourner Truth Memorial Statue and now is heavily involved in establishing The David Ruggles Center. After seven years of renovations, the center opened to the public on June 20, finally offering a space in which to celebrate the history of the Underground Railroad and the connected Florence had with the pursuit for freedom by African Americans and democratic workplaces.

Steve says that once he learned that Florence was founded as a cooperative community, he felt it so inspiring a correlation, given his years in worker-cooperatives, that he has been invested in its history ever since.

If you’re interested in more info about The David Ruggles Center check out the site here, and if you want to peruse any of the outstanding titles that Levellers has to offer stop by their online store here!