You are here: Home / All / Fighting Cancer, One Relay at a Time 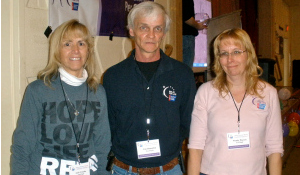 The 16th annual American Cancer Society Relay For Life of Hampshire County will kick off on Friday at 3 p.m., transforming Look Park into a place of hope and celebration. I’ve been involved with Relay for about six years now, first as a team member, and now as a team captain and the publicity chair.

I first got involved because I lost a brother to cancer before I was even born. He was 10 and had leukemia. Since, I have lost several close friends and my husband, Ed Godleski, to cancer, and several people in my immediate family have been affected by the disease.

I hate cancer. And I will do what I can to raise money to fight it.

I love Relay because it offers an outlet for fighting back and because it gives an opportunity for hope. There is nothing so moving as watching the survivors walk the track as if to say, “You suck cancer. We will beat you.”

The luminaria celebration, held at 9 p.m. this Friday night, also always brings a tear to my eye.

Relay doesn’t happen by itself though. It takes a lot of work to pull off, so I wanted to say a few words about some of the people involved, who I am lucky enough to know.

In Hampshire County, a committee of dozens of volunteers is led by three chairs, Wendy Payson of Southampton and Gail Croake and Jim Hannifan, both of Easthampton.

Even with full-time jobs and families to care for, these volunteers take time out of their busy schedules to oversee subcommittees and take on literally hundreds of tasks – from fundraising for their own teams to figuring out all the logistics of the event.

Wendy, Gail and Jim knew each other before becoming chairs as they were separately involved with Relay teams. This June will mark Jim’s fifth year as a participant; his first was in 2009 after losing his wife, Donna, to cancer.

Gail did her first Relay 10 years ago when the company she works for started a team after losing a colleague, and now, she Relays in memory of her mother, who passed away less than two years ago, as well as family members currently battling the disease.

The chair with the longest participation record is Wendy, who got involved with Relay in its first year in Hampshire County in 1998, only one year after losing her father to the disease.

Gail encourages everyone to experience Relay: “You will never experience a feeling like this anywhere.”

Madelyn Breen is another tireless volunteer for Relay. While she has never suffered from cancer, as a nurse for many years and a caretaker to friends and family members, she has watched too many people suffer. She has been a Relayer for 16 years.

Madelyn has an extensive background in cancer care, having served as a nurse for 42 years, the last 16 in the Cancer Care program at Cooley Dickinson Hospital in Northampton. While she claims she’s retired, she continues to work as needed about four days a week, sometimes five, splitting time between Cooley’s Cancer Care program and local Northampton oncologists’ offices.

Many young people are also involved in Relay, like Michel John Venne of Florence, who got involved with friends on a team called Everybody was Cancer Fighting almost 10 years ago. Inspired by a cancer survivor who was their seventh grade teacher and student council advisor at the time, Michel and his teammates, like Monica Hunter-Hart, also of Florence, wanted to do community service.

Over time, they all realized cancer hits close for them too, and they stayed involved even after leaving the area for college.

Geraldine Raucher, a 10-year cancer survivor, is the kind of person they Relay for.

Raucher was diagnosed with Paget disease of the breast on her 40th birthday. The rare disease is found in about one to four percent of all breast cancer cases. Undergoing both a mastectomy and a subsequent reconstructive surgery over three years after her initial diagnosis, Raucher’s long road to recovery could not have been made without the help of others. She describes the journey as going “to hell and back.”

This year, the American Cancer Society will be enrolling volunteers in a cancer prevention study at the Relay. This is another opportunity to make a difference.