You are here: Home / All / Excerpt from Work of Short Stories 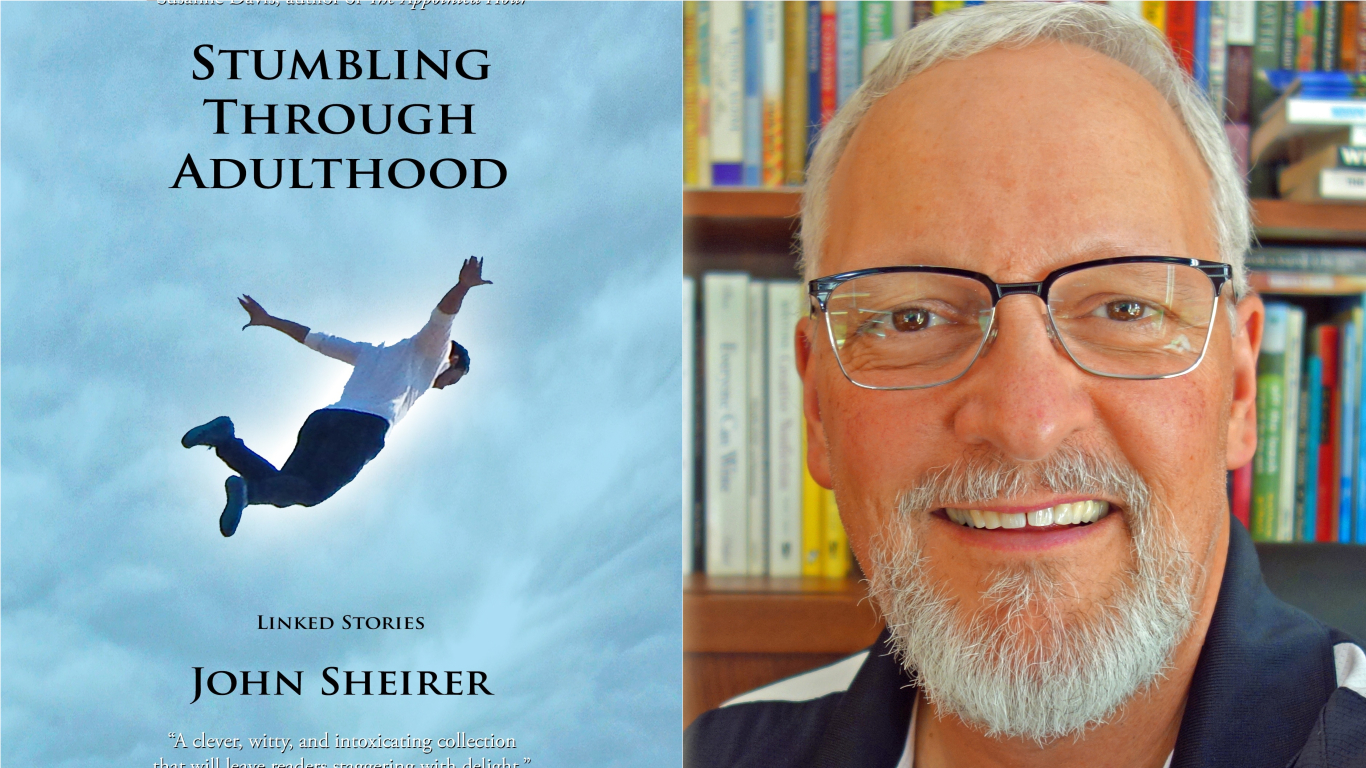 Note: Today you will get a glimpse at the writing of John Sheirer, a prolific author of fiction from Florence, Massachusetts, who recently published a new collection of linked short fiction, “Stumbling Through Adulthood,” which carries the Janice Beetle Books imprint and is available on Amazon. The book is a collection of stand-alone stories with characters who are linked, meaning they reappear like subtle surprises and rekindled connections. The book shines a light on John’s compassionate and often quirky characters and their intimate experiences, all with a backdrop that is clearly modern-day America and its recent, volatile culture. (Learn more about John here.) The below excerpt is from the book’s first story, “Are You Him?” In it, Arthur, a middle-aged black man who is walking to his job at a bank, sees a young white woman crying on a stoop down a side street. He stops to see if she’s okay. This excerpt begins when Arthur first approaches the woman.

Arthur stepped forward and eased his big frame onto the stoop, being careful not to spill his coffee. The concrete felt cool through his slacks. The young woman didn’t look his way but stiffened a fraction, just enough for Arthur to notice because he was expecting that reaction. “Is this okay?” he asked. “Is it okay for me to sit here with you for a minute?”

She glanced at him quickly and relaxed, nodding slightly.

“Are you sure you’re okay?” Arthur asked.

She drew in a long breath and exhaled in a short burst, blowing air through a mouth oval like an athlete, just as Katie did at soccer practice. Arthur was relieved to see that her sobs had stopped, at least.

“I’ll just sit here with you for a minute,” he said. “Make sure you’re okay. Talk if we need to. Or just sit.”

She breathed steadily now, staring at her feet. Arthur swished his coffee around in its cardboard cup and looked off in the distance. He glanced down and noticed that the new kid at the coffee shop had spelled his name “Author” when he wrote it on the cup. He suppressed a chuckle—wrong place, wrong time. He made a mental note to keep the cup. Donna would get a kick out of it later.

A minute passed. Neither said anything. She sighed now and then, but her tears had morphed to an occasional sniffle.

Two more minutes went by, and Arthur drifted into a companionably meditative state, almost absent conscious thought. He felt that his presence was helping—his big, dark, solid body creating a personal gravitational field that pulled some of her sad desperation away while he projected reassurance to lend her his strength as she sought to renew her own.

Then Arthur noticed two white men walk by on the main street, the same street he had approached the young woman from just a few minutes earlier. One man glanced toward them and hesitated—just a minor hitch in his stride, not more than a second. In that second, Arthur knew the man was assessing the situation: big black guy sitting alone with a small, young, white woman in a semi-hidden space. Arthur guessed that the man did a quick calculus in his mind, registering the fact that the black man was close to middle age, large but wearing a neat, white shirt (always white), navy dress pants, necktie, and employee-type ID badge clipped to his pocket. The young woman seemed to be there voluntarily, wasn’t being physically restrained, didn’t seem in immediate jeopardy. Arthur knew that he probably would have followed the same thought pattern if he were seeing things from this guy’s perspective.

The man looked away and walked on, immediately back in step with his companion. Arthur figured he hadn’t seen enough of a threat to feel the need to intervene at that moment.

But what if the man had pulled out his cell phone a few steps later and dialed 9-1-1? Arthur had been looked on with suspicion enough times in his life to know that it happens to black men. In high school, he learned that it was easier to go to the mall with at least one of his white friends, drastically reducing the number of times that he was followed around the store by a clerk who was probably told by a manager that black boys steal. Arthur always nodded to the clerk, smiled, and asked politely about some article of clothing. The clerk usually relaxed and struck up a conversation. Arthur tended to believe that white people, like all people, were basically good. The impulses that led some white people to suspect him based only on the color of his skin could, in Arthur’s experience, generally be overcome.

Generally. He had been pulled over by the police a few times for no apparent reason. “DWB,” his friends called it. “Driving While Black.” One high school friend who always did well in English class called the experience a “pigmentational hazard.” Arthur’s father had given him “the talk” when he was just seven: Most police are good. Be polite. Do what they say. Smile but don’t laugh. Make eye contact. Keep your hands away from your pockets. Follow orders right away. Move calmly but don’t give them an excuse to think you’re lazy. He had given Katie a toned-down version of the same talk when she was eleven. Being black and female was usually less threatening, but not always.

For Arthur, for Katie, this strategy had worked. For some—for many, Arthur knew—it had not.