You are here: Home / All / Discussion with an Agent and an Author 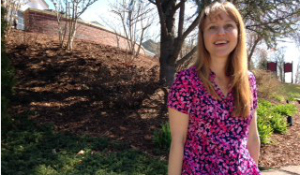 Note: This is the fourth of six parts. Click here to read from the beginning.

Finding a book agent is a full-time job.

That’s the key take-away I got when I attended a presentation with a book agent and a children’s book author at Bay Path University’s Writer’s Day event in April.

In the first session of the day, Elise Erickson, a literary agent with Harold Ober Agency in Manhattan, offered tips for writers on how to get started in finding an agent. And Christina Cooper (pictured), a children’s writer from Longmeadow, Massachusetts, talked about her tireless but successful search for an agent who is now actively pitching her book about a bicycling adventure.

Elise said it’s good for authors to have a book agent but that it’s not for everyone; agents do the work of tracking down the financial advances, and they serve as a liaison between the author and editor, which “preserves that good relationship.”

“When you have an agent and a team behind you, you get to focus more on the writing,” she added.

The work of an agent, Elise said, is intense and specific. On Writer’s Day, she said she had 850 queries from authors in her inbox with more inquiries arriving each and every day.

Here are some tips from Elise:

Christina said she started her search for an agent several years ago, querying agents about what she describes as her “funny, quirky, strange little book.” She used a spreadsheet to track which agents she had pitched to and when and what their response was. She sent her queries in batches of 10, and when she received one response (rejection), she would then send a new batch of 10.

After asking a local librarian about book agents, the librarian connected her to one, and that agent’s advice was to get involved with writing conferences, which Christina then did. She loved the atmosphere and being surrounded by agents, editors and other authors.

Her query letters improved over time—as she began to drop personal remarks such as “I understand you represent Daniel Pinkwater, and I love his work.” The quality of the rejections she received improved then too, meaning agents would tell her what they liked about her work and sometimes suggested other agents for her to turn to.

Eventually, Christina did find an agent that accepted her book and is now pitching it to publishers.

Here are some tips from Christina: