You are here: Home / All / Daddy’s Little Girl 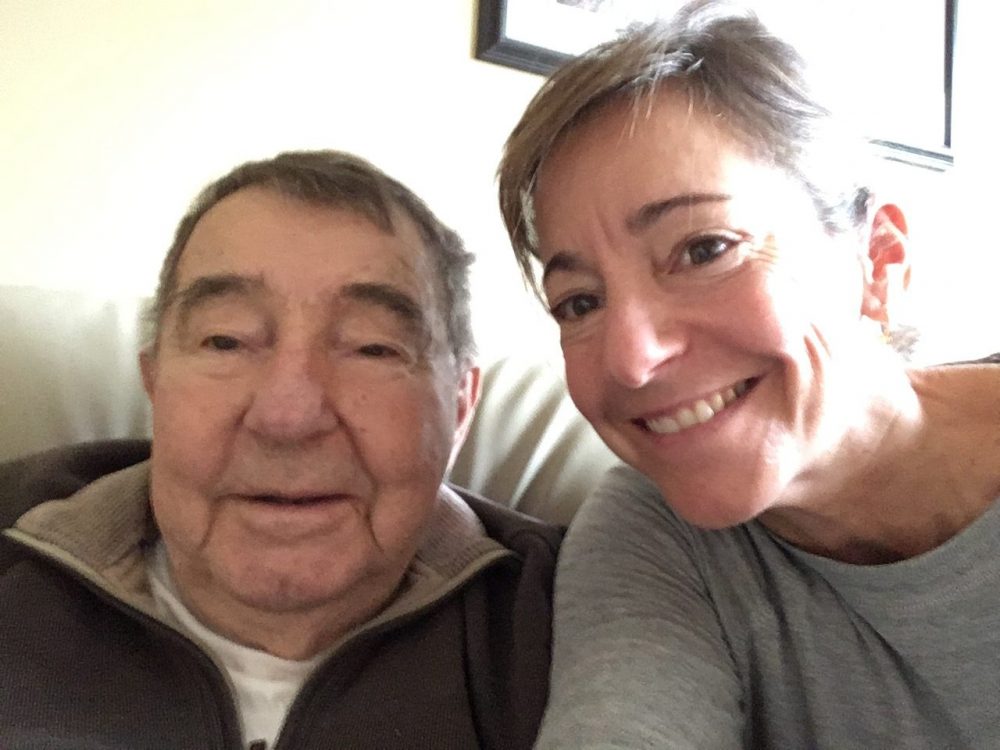 My family lost its patriarch in October.

Harvey Beetle lived to be 90. He was a quiet, gentle, compassionate soul. He drove a brand-new Lincoln nearly until the day he died and ate donuts, cookies, and ice cream just as often as he could. While you can learn a lot about Dad in the obituary I wrote this spring with his rather enthusiastic input, there is so much more to know about him.

Dad grew up in Braintree, Massachusetts. An athlete who was always fiercely competitive, he captained his high school basketball team. By that time, he’d already earned his lifelong nickname—Scud—by reading picture books about an elderly rabbit named Uncle Wiggily and his adventures with the Scuttlemagoon. (I’d always assumed it would be spelled “Scuddlemagoon.” Right?)

The shore of Lake Winnisquam was the backdrop for Dad’s summers. His parents owned a rustic cottage in a cove at the lake’s southern end, and his family, including my aunt Betty, lived there in July and August.

Back then, the only other cottage on the now-very-populated lake was owned by my mother’s parents. Dad became friends with my mother’s brother Jackie as a boy. He first kissed my mom when he was 14 and she was 11, in a game of spin the bottle. They began dating after mom—out on the lake in a rowboat at about 16—waved Scud over in his motorboat and invited him to dinner with several of her friends.

Lake Winnisquam became like a part of our family. Both of my parents held it nearly as dear as a child. They owned their own summer camp—a stone’s throw from my mother’s childhood homestead on property her father had owned—until about 11 years ago. My brothers, Jeff and Allan, and I spent our summers there with mom; dad visited on weekends and over the one, two-week vacation he had each year.

My parents were married for 68 years. They fought, disagreed, loved, and adored. At the time they were parted, they were the very best of friends. They counted on one another for entertainment, assistance, well-being. Their best memories include raucous parties with couples they knew for many decades, clever practical jokes, and some inventive and racy Halloween costumes.

Dad loved sweets and was diagnosed as diabetic in his early 60s. That did not stop him from consuming sugary desserts morning, noon, and night. One of the few times I saw him angry at my mother, it was because she had neglected to stock our dessert cupboard.

“No Twinkies? No Ring Dings? No cookies? ” I remember him yelling. He did not notice we were all amused.

Patience was one of my father’s truest virtues. He never, ever got rattled, raised his voice, spanked, or scolded. He taught my brothers and I to drive cars and boats, and he did not freak out when we damaged them in collisions, even those that were blatantly our fault.

He also hated conflict. He made my mother do the dirty work of raising us kids. As a teen, for instance, I took long showers. My mother often hollered in from outside the door to “get out of the shower!” I learned later that my father made her do it. He was frugal, and my waste of hot water pained him.

Dad loved animals. He begged my mother for years for a dog but never got one. He once stopped his car late at night to pick up a turtle on a back road of Belmont, New Hampshire, and carry it safely to the woods on the other side. He donated to wildlife groups. As I cleaned his desk off a few weeks ago, I found a letter he had written to the governor of New Hampshire, lamenting the plight of bobcats.

I also found notes on a scratch pad for a letter my liberal father seemed to be penning to President Trump.

I appreciate that the end of my father’s life passed swiftly. And I am beyond grateful for the moments I spent with him in his last two or three weeks. I visited him daily, brought him Dunkin coffee and an assortment of Munchkins in the mornings. In one early visit, I told him I’d be back later in the day to watch the Patriots game with him.

“I do have things I have to do,” I said. “But the only thing I want to do is watch football with you.”

That is one of the last gifts my father gave me.

One gift I hope my family and I gave him was a final gift of music. My father was an avid barbershopper for all of his adult life. On his last afternoon with us, we streamed classic four-part harmony on Pandora from my iPhone, tucked near his ear.

Because he had sung it to me so many times, I sang “Daddy’s Little Girl” to him.

I will always be Scud Beetle’s little girl.